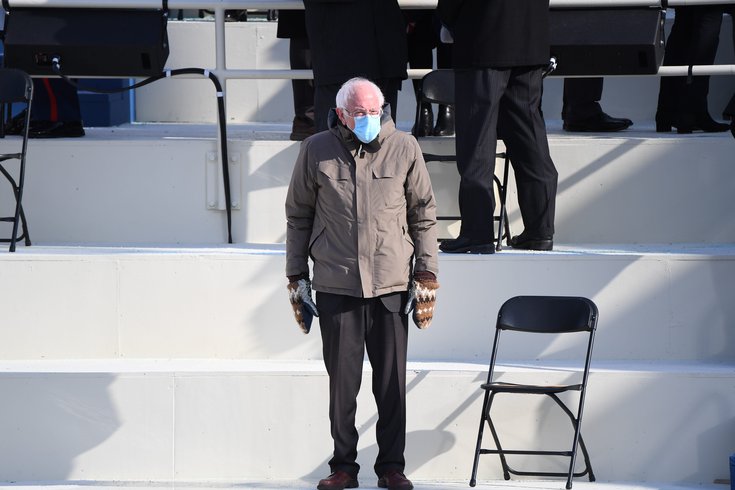 While this photo of Bernie Sanders shows off his full fashion choices on Inauguration Day, inspired by living in Vermont's cold climate, it was an image of the senator sitting down with arms crossed that captured the internet's attention.

By now you've probably seen the many, many Bernie Sanders memes floating around the internet.

The image of the Vermont senator on Inauguration Day, seated on a folding chair with his arms crossed and his cozy mittens on full display, now seems to be everywhere after being shared and edited endlessly on social media.

There's even a bobblehead on the way and Sanders' official site began taking pre-orders on Thursday for a crewneck sweatshirt showing the image, with proceeds going towards Meals on Wheels Vermont. The website currently states there has been "overwhelming demand for this item," and sweatshirt orders have been delayed 3-6 weeks already.

There is another place to get trendy Sanders meme merchandise, though. The National Museum of American Jewish History in Philadelphia is now selling "Bundled Up Bernie" mugs for $15 and T-shirts for $24.

Both are in-stock online and shipping within seven days.

Unfortunately, you won't be able to get Sanders' mittens to go with your new look, however. Vermont teacher Jen Ellis made them for him as a gift and doesn't have any more to sell.

"There's no possible way I could make 6,000 pairs of mittens, and every time I go into my email, another several hundred people have emailed me," Ellis told the Jewish Insider. "I hate to disappoint people, but the mittens, they're one-of-a-kind and they're unique and sometimes in this world, you just can't get everything you want."