Ranking every Eagles pass rusher ever 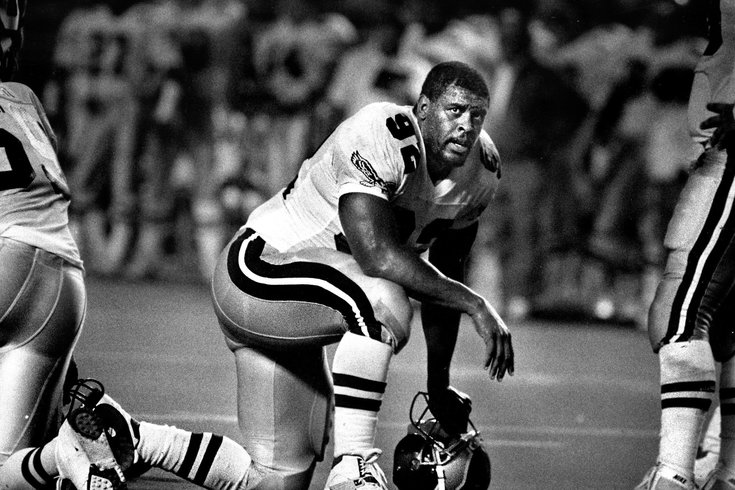 After we looked at the best Eagles quarterbacks ever, their best running backs, their best wide receivers and their best defensive backs, we weren't satisfied.

What about pass rushers?

After Reggie White — our unanimous No. 1 (duh) — there are some really interesting names that brought us back to some of the Eagles teams we loved the most. And so we decided we'd try and rank every single pass rusher (any defensive tackle, defensive end or in some cases outside linebackers with a minimum of 45 games played for Philadelphia).*

*Shoutout to John Green, who played exactly 44 games for the Eagles from 1947-51 and made a Pro Bowl — we had to cut it off somewhere.

There's a bit of ambiguity when it comes to which players and positions constitute a pass rusher so we used our best judgement, deciding that players like Chuck Bednarik and Ike Reese were more of an on-ball linebacker. Hopefully there are no omissions that prompt you to reach out and yell at us.

Our results, with some context, commentary and stats, are just below:

Nick Tricome: The Eagles' all-time leader in sacks, by a huge margin, a Pro Bowler for 13 straight years, and a first-team All-Pro in six straight (1986-1991), "The Minister of Defense" was a larger-than-life personality who wasn't just the Eagles' all-time greatest pass rusher, he was one of football's greatest talents, period. No. 92 in Kelly green is his number, and his alone.

Shamus: As someone in their late 20s, I can't properly put into context the way that Jerome Brown's death affected not just the Eagles on the field, but them as people overall and fans across the area that fell in love with the boisterous, dominant defensive tackle. I nevertheless understand the importance of Brown in talking to the elder Eagles fans in my life. It's simply terrible that his life was cut short. Last playing in his age-26 season in 1991 and making his second-straight All-Pro First Team, Brown may have been on his way to a Hall of Fame career. "Bring It Home for Jerome" was an incredible rallying cry and the Eagles finally did so on February 4, 2018, which happened to be Brown's 53rd birthday.

Nick: With Reggie White lining up opposite him, Simmons can sometimes be overlooked when looking back at those dominant Eagles' defense of the late '80s to early '90s, but that didn't mean he was any less vicious on the field. Third all-time in the franchise in sacks, Simmons getting to the opposition's quarterback instead of White was never any more of a mercy.

Shamus: Brandon Graham went from a bust to a key rotation player to a very good starter to the guy responsible for the biggest play in the history of Philadelphia sports in less than a decade. In ranking our respective lists, Evan Macy got testy that I ranked people from the Super Bowl so high as a form of recency bias. The whole point of the team playing is to win the Super Bowl! This crew did what no one could do and Graham changed the trajectory of everything in this city with a single bull rush.

Evan Macy: Cole was a steady veteran pass rusher for a pretty long time and was kind of the bridge between the Andy Reid and Chip Kelly eras. Two other defensive linemen on this list — Graham and Cox — no doubt credit Cole for helping them develop as productive pros.

Nick: A fixture of the Eagles' current defensive line for a decade now, Cox is a well-established menace to opposing quarterbacks. And though he's in the late stages of his career, and isn't the player he used to be, he will for sure go down as one of the Eagles' all-time greats, especially with that unforgettable army crawl after a sack. It never gets old.

Nick: A great player, a greater story, but arrived at a bad time in Eagles history. Brown was a steady presence through the Eagles' forgettable years in the mid '80s, but did find a place in the team's record books with the seventh-most sacks all-time. Not bad at all for a guy who walked off a construction site and into the NFL.

Shamus: "HUGHHHHHHHH..." Douglas was a beast and the best non-Brian Dawkins player on the 2002 Eagles, the best defensive for this team that I've seen in my lifetime following the Birds. He had a ferocious pass rush, even going old school at times in a four-point stance as he got after opposing QBs. Douglas led the NFL in tackles for loss in 2000 and '02 as well.

Evan: Fuller really jumped out at me when I was researching these d-lineman. In three seasons with the Eagles he made the Pro Bowl all three times and averaged more than 11 sacks per season. He also forced 12 fumbles. On teams that have mostly been forgotten, wedged between the early '90s Reggie-White defense and the Andy Reid teams, he rightly deserves a top-10 nod.

Shamus: In doing all of these rankings, I've placed a priority on being a part of winning teams and high peaks. Carl Hairston had a whopping 15.5 sacks for an Eagles playoff squad in 1979 and then totaled nine during the Birds' 1980 Super Bowl campaign. Peak and winning combo right there.

Shamus: Dennis Harrison's three-year peak from '82 through '84 had him recording 34 sacks. While he only contributed four sacks in 1980, he did start 15 games for a team that made the Super Bowl. That's big.

Evan: Connor Barwin was really cool off the football field and I know that shouldn't factor in here — his numbers speak for themselves as he was a prominently productive member of the quickly forgotten Bill Davis defense under Chip Kelly — but he road the subway to practice everyday, and I once sat next to him at a Bruce Springsteen concert.

Nick: A steady and durable defensive tackle for a decade under Dick Vermeil, Marion Campbell and Buddy Ryan, Clarke was a key piece of the Eagles' defense in their run to Super Bowl XV in 1980 and recorded a career-high 10.5 sacks in 1984.

Evan: Simon was a big defensive tackle the Eagles picked sixth overall in 2000 and he generally worked out as a pick for them, helping to anchor the interior offensive line for a team that made it to four straight NFC championship games. He never signed a second contract with the team and fell off with the Colts and later the Titans.

Shamus: No, he isn't the most famous Eagles defensive tackle to wear No. 91 nor is he the most accomplished pass-rusher of the '90s for the Birds, but the dude's production was stellar. In a three-year period from 1993 to 1995, he had 193 tackles and 31.5 sacks. I see a ton of his jerseys available on eBay when I'm doing my vintage sports gear thrifting. Not a bad buy for a younger millennial or zoomer who's looking for a hipster jersey choice!

Evan: I actually had Kearse in my top 10, he was an absolute monster in Madden when Madden was good.

Shamus: Mike Mamula... not as bad as you think! Yes, he never lived up to his "workout warrior" combine performance. The fact that the Eagles drafted him five picks before Warren Sapp in the first round of the 1995 NFL Draft is utterly defeating. 31.5 sacks in just five seasons is pretty decent though.

Nick: Vinny Curry grew up an Eagles fan and helped win that first Super Bowl. He did the one thing that every kid from the Delaware Valley dreamt of doing. And Jevon Kearse, we kind of automatically go back to T.O as the big game-changer for that 2004 team, for obvious reasons, but getting Kearse was such a huge boost on the defensive side of the ball too. I remember him terrorizing Joey Harrington in that Lions game, Dante Culpepper and Mike Vick failing to escape his reach in the playoffs, and, most of all, him taking a bow with the NFC Championship hat in his hand.

Evan: It is interesting to say the least, seeing Barnett at 28 and Sweat at 30. I expect Sweat to leapfrog into the top 20 with a productive season in 2022, and expect Barnett to become an afterthought if he doesn't rebound on a one-year deal with the Birds this season.

Shamus: Mike Patterson is perhaps a player who disappointed with poor sacks numbers and a first-round pick pedigree, but was a solid starter for seven years as more of an archetypal run-stopper. At one point, Patterson had his full first and last name on the back of his jersey. The Eagles may never see something that wild again!

Nick: Barnett never really broke past his promise, but at the end of the day, he recovered the most important fumble in Eagles' history, and that's a-okay with me.

Shamus: Mike Golic going to Notre Dame, playing for the Birds' defense during the Buddy Ryan and then having a long radio career makes him a hero to South Philly dads.

Evan: Some fun recent players on this list including Logan, and Allen who recently retired.

Shamus: Beau Allen had just two sacks in his Eagles career, but considering his standing as a Super Bowl champion and accompanying guest appearance on "It's Always Sunny in Philadelphia," Allen remains a guy who'll never pay for a beer in the city again.