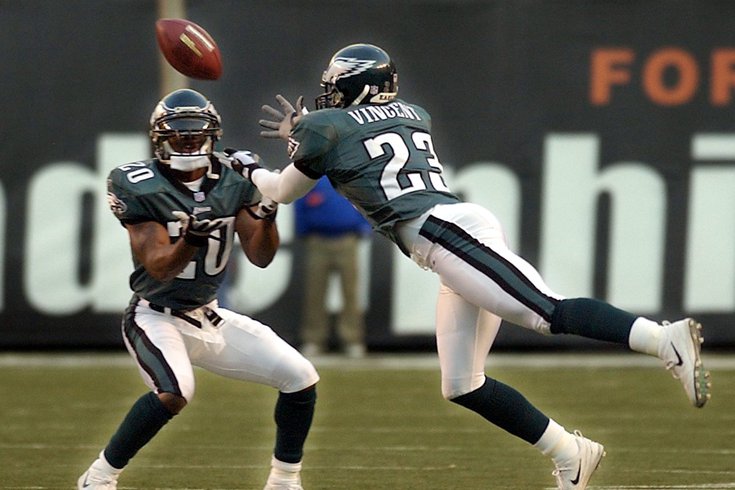 The Eagles have had some pretty darn good cornerbacks and safeties over the years...

We had so much fun deliberating and nostalgia diving over the Eagles former quarterbacks, running backs and wide receivers we decided to keep it going.

This week, we'll be ranking every Eagles defensive back ever (with a reasonable cut off of 28 games played for the franchise — which gave us 78 eligible players).

In comparison to the offensive players we ranked in prior posts, the defensive backs go pretty deep and one has to think that the Eagles organization has to have one of the better stockpiles of d-backs when compared to the other 31 teams.

So which cornerbacks and safeties are in our top 10? Let's take a trip down memory lane as we rank the entire history of the Eagles secondary:

Shamus Clancy: Do I really need to tell you about this guy? Brian Dawkins is perhaps the most beloved Philadelphia sports figure of all time. He was on the forefront of the safety revolution at the turn of the 21st century, a a guy who rush the passer, defend the run, stick receivers and play zone deep. Dawk is the only player in NFL history to have at least 36 forced fumbles, 37 interceptions and 26 sacks in his career (via Stathead). As a guy with an X-Men tattoo, I can certainly say that his Weapon X persona bled into his berzerker energy on the field as well. No athlete has ever summed up the heart and soul of this city quite like Dawkins.

Nick Tricome: If your QB survived Reggie White, Jerome Brown, and Seth Joyner, then this guy would be there locking down one of his options. Allen started in all but one game during his seven-year run with the Eagles and was a five-time Pro Bowler and First-Team All-Pro in 1989.

His work in the backfield was key to those late 80s-early 90s Eagles defenses being so dominant and has a very strong Hall-of-Fame case that has yet to be answered, despite the backing from one of the NFL's greatest DBs.

With that, I link to Allen's huge pick-six of Boomer Esiason and the Jets back in '93. As always, I cannot embed it because the NFL's YouTube policy is dumb.

Evan Macy: Jenkins was one of the best acquisitions in team history, he anchored the Super Bowl secondary and became a staple in Philadelphia. He was one of the best guys to cover and talk to after games and I never really understood why the Eagles choose to hold on to Rodney McLeod instead of him a few years ago.

Evan: Vincent, who currently works for the NFL, was one of the best cornerbacks in football while he was in Philly and five Pro Bowls in eight seasons is pretty darn impressive. He is still somehow underrated and is a no doubter top five all time d-back.

Shamus: I've never seen a bigger ballhawk in my two-plus decades watching football than Asante Samuel. I'm not talking about guys who just played for the Eagles. I'm talking about throughout the entire NFL. He probably deserves more Hall of Fame consideration than he's gotten. His pick-6 against the Vikings in the 2008 Wild Card round was absolutely electric. There's something about Eagles corners going to the house against Minnesota in the playoffs!

Nick: The photo of Brookshier clamping down on Green Bay's Ron Kramer in the 1960 NFL Championship game has been hanging on my wall for well over 15 years and might be the best summation of his playing career. As soon as the ball came your way, he was right on top of you. Brookshier was a Pro Bowler and First-Team All-Pro during the Eagles' title run, and was just as crucial of a leader for it as well.

"If you had somebody you wanted on your team, it was old Tom Brookshier - number 40," Eagles great Tommy McDonald, who credited Brookshier with helping him become a better receiver, said. "He was a really good leader. He was right there with Chuck Bednarik. They were the two guys that really, really stood up for that defense big time."

A broken leg brought his career to a sudden end in 1961, but by then, his place in Eagles history was secure and his No. 40 eventually retired.

Evan: Sort of like they did in the 90s and 2000s with running backs, the Eagles had some remarkable continuity with Pro Bowl caliber cornerbacks, starting with Bobby Taylor and Troy Vincent and spanning to Sheppard and Sheldon Brown. It's no wonder they had one of the best defenses in the NFL over that span.

Shamus: Perhaps overshadowed a tad given he was playing opposite Vincent and Dawkins, Bobby Taylor was legit great. The 2002 Eagles had the best defense I've ever seen from this franchise and Taylor was as integral to that as anyone. His pick-6 in the Divisional Round playoffs off Michael Vick that season led to the team's final win at Veterans Stadium too.

Shamus: A member of the Eagles' legendary 1991 defense, Hopkins has the fifth-most interceptions in team history. His versatility feels like a bit of precursor to what Birds fans would later see with Dawkins. How did he only make one Pro Bowl?!?

Shamus: A member of the 1980 Eagles squad that made it to the Super Bowl, Logan brought a combination of toughness a nose for the ball that every team should want out of the safety position.

Nick: Another staple of the Buddy Ryan-era defenses and a guy you absolutely did not want to see when cutting across the middle of the field. He punished receivers every time, but tragically, at his own expense.

Evan: Edwards is more known as a head coach but he was a really solid corner for the Birds in the 80s including the Super Bowl team. He doesn't have any Pro Bowls to show for his effort but he was a ball hawk to be sure.

Nick: Bradley led the league in interceptions two years running with 11 in 1971 and nine in 1972, and holds a three-way tie with Allen and Dawkins for the most picks in franchise history at 34.

Nick: A reliable corner for several years with a few big interceptions and even bigger hits, including that time he took Reggie Bush's soul.

Evan: The Eagles looked to free agency to create what would wind up being a Super Bowl (and perhaps the best in the league at the time) tandem at safety and McLeod wound up being a key acquisition and contributor every year he was in Philly.

Evan: One more solid season from Slay might be all it takes to boost him into the top 15 or even top 10 of a very impressive list of defensive backs.

Shamus: Michael Lewis wasn't even a top-five Eagles DB of his era and he would probably be a top-10 pick on a lot of NFL franchises' rankings.

Shamus: The first Eagles game I can remember watching was the team's Week 16 matchup with the Giants in 2001. The Eagles clinched the NFC East title for the first time since 1988 that day. On the game's final play, New York narrowly stole a win, as a 14-yard catch from Tiki Barber led to a 62-yard run on a lateral to Ron Dixon. Damon Moore tackled a streaking Dixon at the Birds' four-yard line, preserving the win as time expired. Disaster prevented!

Nick: It's probably recency bias playing a role here, but I think Avonte Maddox can probably make his way up a bit if he stays put with the Eagles for a couple more years.

Evan: On Ronald Darby. Howie Roseman had me convinced he would be really really good. Meh.

Shamus: I've had a very difficult time over the years trying to find a Tim Hauck jersey on eBay.

Nick: When I hear Ronald Darby's name, my head goes right to that near interception in the Super Bowl that Tom Brady threw him that could've ended it right there. I've never held my breath that hard in my life, and there was still one more play to go after that.

Shamus: Brandon Boykin's NFC East-clinching interception against the Cowboys in Week 17 in 2013 is the greatest Eagles moment of my college years.

Nick: I kind of link Rasul Douglas and Sidney Jones together since the Eagles took them in back-to-back rounds in the 2017 draft. Cornerback was a huge need at the time, and while Douglas had a decent run, I think everyone was ultimately hoping for a bit more.

Evan: It might be (somewhat) recency bias but I don't know if I remember watching a more frustrating cornerback than Cary Williams...

Shamus: If a cornerback is better known for tackling and getting bonehead penalties than covering receivers, that's a bad sign. That was the Cary Williams experience.

Evan: ...Except for maybe Bradley Fletcher.

Shamus: One guy on this list loves eating lunch in his car. I think you known who. Patrick Robinson didn't make the minimum games played requirement for this list, but he's nevertheless one of the most important players in Eagles history.