Ranking the best sports video games of all time 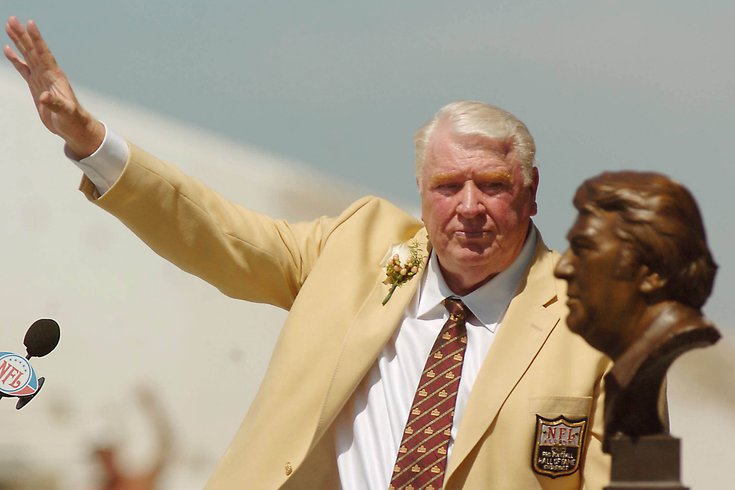 The man whose name defined a generation of sports video gamers.

There was nothing I loved more as a kid than spending my summers off from school than playing "Madden" until the early morning. As this summer gets started in earnest, plus on the heels of buzz that NCAA Football games from EA Sports will be returning in 2023, the PhillyVoice sports team is looking back on the greatest sports video games ever.

Aggregating rankings from Evan Macy, Nick Tricome, Kyle Neubeck and myself, we pulled off a top-10 list of the best sports games. Take a sip of this nostalgia, dust off your old Playstation 2 and check out our picks:

Which one was it?: With Julius Erving, Chicago-era Michael Jordan and a streetball player on the cover, "NBA Street Vol. 2" took basketball video games into the next century.

Why we love it: "NBA Street Vol. 2" takes the blueprint of "NBA Jam" and modernizes it. With three different versions of His Airness, contemporary NBA stars such as Allen Iverson and legends like Dr. J available to play, the game brought a unique twist to basketball simulations with flashy passing, high-flying dunks and wild blocks. You could play on a street court in Philadelphia too! — Shamus Clancy

Which one was it?: The last baseball game made by EA with MLB's license, this game was the GOAT for me. The memory card that saved my franchise with my high school buddy Luke became the most prized possession I lose when my house burnt down. And that sadly isn't a joke.

Why we love it: The soundtrack is beyond measure it is so good. Seriously, go check it out on Spotify. Also, the drills that franchise mode had, particularly the precision pitching and the hitting drills were absolutely incredible and it is completely insane that no other baseball game since has included drills like these. — Evan Macy

Which one was it?: The one with Terrell Owens on the cover after he had just joined the Eagles, came out weeks before Madden 2005 and cost...wait for it...$19.99...TWENTY DOLLARS.

Why we love it: To this day, many will still tell you that this is the best football game ever made. The on-field product required you to think like a coach and gameplan and adjust accordingly based on your team's strengths and what the opposition was giving you; The ratings system and AI varied players in a way that made them all feel like pros, but fairly and naturally put the superstars a cut above the rest; The franchise mode was the ultimate armchair GM sim, giving you complete control over your roster decisions all the way down to how your team prepares week-to-week; The Crib was a fun digital trophy room that encouraged you to try out all the teams and play in different ways; And the VIP profiles were way ahead of their time, tracking all of your play calls and tendencies to create a digital version of yourself to face off against or hand off to your friends to try and beat. It was wild. And to top it off was a fully integrated ESPN presentation that included all the graphics, music, sideline reporting and interviews from Suzy Kolber and a pregame, halftime, and postgame highlights show from Chris Berman (a touch that smartly masked a lot of the in-game load screens). There's a very strong argument that there hasn't been an NFL game like this since, and the shame of it is there may never be again because of EA's exclusivity agreement with the league. — Nick Tricome

Which one was it?: The OG. Come on, you know this one.

Why we love it: The release of "NBA Jam" predates my birth, but the game remains an institution nearly 30 years after it dropped. Do you know how much money I've spent at Barcade in Fishtown playing as the Suns and Sonics? — Shamus Clancy

Which one was it?: Hot off the Eagles' second ever Super Bowl berth, Donovan McNabb graced the cover and the franchise introduced "Superstar" mode.

Why we love it: There's some obvious bias in here given an Eagle being on the cover, but the Eagles offense in this game was unstoppable with McNabb, the greatest Eagles running back of all time in Brian Westbrook and Terrell Owens coming off the best season of his career. Even Todd Pinkston crushed in on those go routes! I still play this game to this day on PS2.— Shamus Clancy

Which one was it?: The game that was packed in with your Nintendo Wii and claimed a TV or two back in the day (kids, always wear the wrist strap).

Why we love it: Outside of Super Mario 64, which was also made by Nintendo, I'm not sure any game has sold the entire idea of its corresponding system better than Wii Sports has. Nintendo hooked the console's entire premise on motion controls, making it a weird system to try and market in the leadup to its 2006 launch. But boot up Wii Sports and you instantly got it. The remote in your hand became a tennis racket or a baseball bat, a golf club, a bowling ball, or even boxing gloves. Just pick the sport and do the motions, it'll work. And it worked perfectly — I maintain that few things in videogames feel better than that quick vibration in your hands when your swing connects on a 650-foot bomb in baseball. That's not even to mention that the game just oozes charm. Between its usage of your created Miis and bright, colorful, simplistic graphics, the game remains a joy to look at to this day and its song at the title screen quickly grew unmistakable.

Wii Sports is an absolute gem, and without it, the Wii probably isn't the top-selling console it went on to become. — Nick Tricome

Which one was it?: This is the best basketball game — simulation version — that was ever made and it's because of the Micheal Jordan mode.

Why we love it: Jordan was never prominently featured in a video game during his prime, so having him in there — three or four different versions of him — was exciting. But the Jordan challenge, was as addicting a videogame prompt as any I ever attempted and I recall literally saving midway through the challenge to save the assists and steals I had banked when trying to replicate some of Jordan's accomplishments. The game also sent the 2K series in the right direction with regard to the classic players. In every version since, old timers have become more and more a part of things and it's made this franchise the gold standard for sports games in my opinion, eclipsing the now stale and complacent Madden. — Evan Macy

Which one was it? The one where the cars fly around an octagon playing soccer.

Why we love it: The ability to play friend online made this game picture perfect for the pandemic and that's when I really fell in love with it. Hard to master but easy to play, it was really fun to meet up with my buddies once a week on zoom and play in tournaments or pick up games, trying to come up with the weirdest possible game modes (I highly recommend playing spike ball and heat-seeker together). — Evan Macy

Which one was it?: The one that either had Atlanta's Dany Heatley on the cover or Colorado's Joe Sakic depending on when in the season you bought it.

Why we love it: A digital Marck Recchi skating gracefully in the background as "Minerva" echoes through an orange and black-tinted menu screen is seared eternally into my mind. NHL '94 is the default answer to the best hockey game ever made, which is more than fair, but my mind will always go straight to 2004 because it felt like you had everything. It had the smoothest feeling skating of the PS2 era, brought in deking and checking with the right stick — setting up for a major control innovation a few years later — and introduced a fighting system that recreated the pushing and pulling of real-life hockey fights. Every arena was loud and felt lively, Jim Hughson and Craig Simpson called games with charisma, and the blend of alternative, punk, and metal that made up the game's soundtrack all combined into this fast and aggressive presentation that captured the spirit of NHL hockey at the time. You could easily get lost in it all for hours on end too. The Dynasty mode, which was basically Madden 2004's owner mode carried over into a hockey game, gave you power over every facet of your franchise for years on end. And if you really wanted to get into the weeds of things, the game included a whole video series with then Canucks coach Marc Crawford, where he broke down every offensive and defensive strategy it had available and when and where to use them. Those wouldn't just make you better at the game, they'd make you a smarter hockey fan.

The years have gone by and EA's NHL series has taken many steps forward, and backward, but none of them ever quite reached the same heights that 2004 did. — Nick Tricome

Which one was it?: 1991 Heisman Trophy winner Desmond Howard was on the cover. EA Sports introduced the "Raise for the Heisman" mode that had me spending countless hours as a dual-threat QB from Notre Dame.

Why we love it: "Race for the Heisman" was a predecessor to the career modes in "MLB: The Show" and "NBA 2K." Watching your created player go on to win four Heisman Trophies and four national championships was as sweet at the marching band performances and the soundtrack that included indie legends Pixies, Guided By Voices and Superchunk. — Shamus Clancy