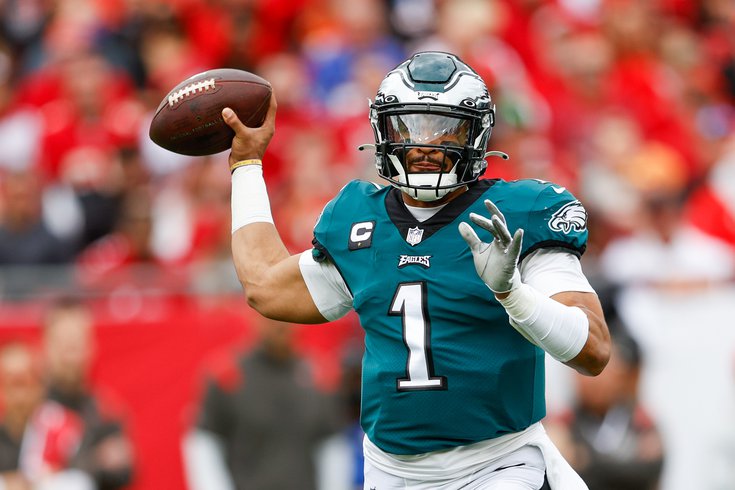 The question in our headline above is one that I get with high frequency, and it's not an easy thing to answer. Typically, the person asking is looking for some statistical benchmark, like 4000 yards, or TD:INT ratio.

Quarterback evaluation can often be subjective. Carson Wentz, for example, threw 27 TDs vs. 7 INTs a season ago, and yet, the Colts couldn't wait to ship him out of town, and rightfully so. He was nowhere near as effective as that TD:INT ratio might indicate.

There probably isn't a hard and fast statistical benchmark that should measure Hurts' 2022 season. He could fall short of such a benchmark and still have proven that he's "the guy" going forward. He could also hit some predetermined benchmark, but the eye test will show that his numbers were misleading.

We'll make the obligatory mention that Hurts has intriguing traits, like the ability to make plays with his legs, and other intangibles, such as toughness, intelligence, and leadership skills. On the downside, his general throwing ability has left much to be desired through his first two seasons, particularly in the accuracy department, and his ability to quickly cycle through his reads and fearlessly pull the trigger instead of holding onto the ball. There. Mentioned. But let's do this a different way, for now.

A few weeks ago, I was listening to the "Around the NFL" podcast with Gregg Rosenthal, Dan Hanzus, Marc Sessler, and guest Patrick Claybon, who were trying to come up with a new NFL quarterback "Prime Meridian" to replace Andy Dalton.

Huh? What does that mean? The late, great Chris Wesseling created the "Dalton Scale," which he described as the following:

To note, Wesseling said this when Dalton was still a starting quarterback a few years ago, and so, the boys on the Around the NFL podcast sought out to name a new quarterback to replace Dalton as the Prime Meridian.

Got that? Anyway, it was a fun premise for a podcast episode, and I thought it would be fun to play along as a way of answering the question of what Hurts needs to do in 2022 to keep his job in 2023. For the record, Rosenthal, Hanzus, Sessler, and Claybon all landed on different quarterbacks as their Prime Meridian. You can listen to their full conversation here:

To start this exercise off, I think we should first rank the NFL's quarterbacks. If we're looking solely at who I would want specifically in 2022, with no regard for growth potential in 2023 and beyond (and ignoring contract considerations), my list would go something like this, submitted without analysis:

I landed on Kirk Cousins as my "Prime Meridian." He always has good stats, and if he's your quarterback you're going to get (mostly) competent play and win some games, but unless you have an absolutely stacked roster around him he's never really going to be a threat to win a Super Bowl because he doesn't have any elite skills and he tends to come up small in big games. He's the closest player to "quarterback purgatory" in the NFL, in my opinion.

I currently have Hurts just below the Prime Meridian, and, well, so do the Eagles, since they unsuccessfully tried to trade for Russell Wilson and Deshaun Watson this offseason. In my estimation, Hurts has to be better in 2022 than what Kirk Cousins represents as of this publish date. And even then, if an opportunity to land a much better quarterback arises next offseason, the Eagles should probably jump at that opportunity. In other words, passing the Prime Meridian merely gives Hurts the chance of keeping his job in 2023, while anything short of that should result in a full-on effort to upgrade at quarterback.

You may have also noticed that I included a "Malkovich Meridian" above. What's that? Well, Hurts will be eligible for a contract extension in 2023. Merely passing the Prime Meridian wouldn't be enough to sign him to a long-term contract, sealing a marriage to him for the foreseeable future. He would need to pass the Malkovich Meridian to even begin those negotiations. Why call it the Malkovich Meridian? Well...

If Hurts proves to be a bona fide top 10 type of quarterback at or beyond the level of a Dak Prescott, for example, go ahead and seal that marriage. If not, the Eagles should continue to keep their options open.

*I didn't know whether to include Trey Lance or Jimmy Garoppolo for the 49ers, so I just put them both in there.