What they're saying: The summer hype builds for the Eagles

The Eagles are a popular team heading into training camp 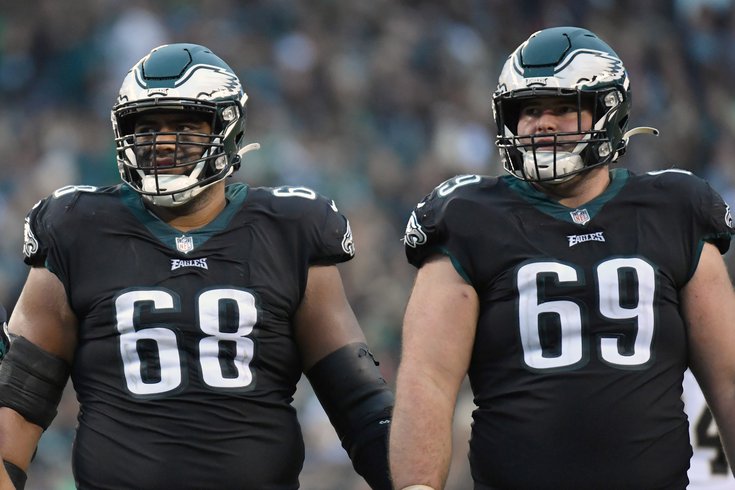 Looks like we've reached that point in the summer where hopes are sky high.

Training camp still isn't for another few weeks, so naturally, there's every reason out there for why the Eagles can go win the Super Bowl. Our own Jimmy Kempski listed 10 of them today, and, for the sake of balance, 10 reasons why they could be a dumpster fire too.

Considering the success the bulk of those teams have had the past couple of years, I'd say that's pretty good company to be in. Okay, well, except for Cleveland.

What PFF had to say about the Eagles' roster:

"Biggest strength: If they don't have the best offensive line in the NFL entering the 2022 season, the Eagles are near the top of the list. Jordan Mailata emerged as one of the top young left tackles in the league last season, ranking second (behind only Trent Williams) in PFF grade (91.2) when lined up there. In addition to Mailata's development, Lane Johnson remains one of the league's top right tackles entering his 10th NFL season, and center Jason Kelce is coming off a first-team All-Pro appearance in 2021.

"Biggest weakness: The James Bradberry addition alongside Darius Slay and Avonte Maddox eliminates a lot of the questions surrounding the cornerback position, but safety remains a potential weak point on defense. Anthony Harris has earned two consecutive sub-70 PFF grades after being one of the highest-graded safeties in the league across the 2018-19 seasons in Minnesota. The Eagles will be relying on Harris, K'Von Wallace, Marcus Epps and recent addition Jaquiski Tartt to elevate their play in 2022.

"X factor for 2022: While the Eagles have done a good job of bolstering this roster over the past year, they'll go only as far as Jalen Hurts takes them. Hurts showed real signs of progress in his second season out of Oklahoma last year, as he finished the season ranked 14th out of 32 qualifying quarterbacks in overall grade — a performance that offered real value on a rookie deal. However, his 45.3 PFF grade in their postseason loss to the Buccaneers highlights the issues that the Eagles will run into late in the campaign against defenses that force Hurts to beat them if he doesn't take another step forward in 2022." [PFF]

Nothing you haven't really heard about the Birds ad nauseam by this point, but nice to have an idea of where they stand among the rest of the NFL, at least on paper.

Dallas is ranked 16th by the way. Skip Bayless doesn't like that.

Pro Football Focus grades the Eagles roster 7th-best in the NFL… and the Cowboys’ 16th. Uh-oh. Now on @undisputed

Power in the trenches

The biggest reason the Eagles are so favored going into 2022 is their offensive line. Led by veterans Jason Kelce (a man of the people and jack of all trades) and Lane Johnson, their wins in the trenches made all the difference in a run-heavy attack that pushed Philly back into the playoffs.

The development of Jordan Mailata into a rising star on an extremely team-friendly contract was a huge boost too, and with that line returning intact and then some, the expectation is that they'll keep wreaking havoc on opponents well into the fall.

From The Inquirer's Mike Sielski:

Look, offseason champion is a title that isn't going to matter come the start of January and isn't something for a team to hang its hat on, especially if it falls apart (the Eagles have been there, after all).

But Howie Roseman has made a series of sound decisions through the draft and free agency to try and push the team forward, and Bryan DeArdo over at CBS Sports believes it makes the Eagles the most improved club ahead of 2022.

"The Eagles made major additions to a defense that came on strong at the end of the '21 season. They made a free agent splash with the signing of Reddick, who comes to Philadelphia after compiling 23.5 sacks over the past two seasons. They then threw salt on the Giants' wounds by picking up Bradberry, who was waived by New York in May as part of a salary dump. The Eagles strengthened the middle of their defense by signing former Charger Kyzir White, who filled the stat sheet last season with 144 tackles, two interceptions and a pair of forced fumbles.

"Philadelphia parlayed its successful free agency into an equally successful draft that included the selections of former Georgia standouts Davis and Nakobe Dean -- the latter of whom was a third-round pick who -- if healthy -- may one day be remembered as a savvy Day 2 draft steal." [CBS Sports]

If you go back to what Eagles players were saying during OTAs and offseason media availability, familiarity was a big point of emphasis.

The belief has been that a second year under the same coach and same system results in a much smoother and more detailed process.

But as NBC Sports Philadelphia's Reuben Frank notes, that goes for the coaches too, especially since there were no departures from Nick Sirianni's staff after 2021.

"There’s a lot to be said for continuity, and a head coach bringing back his entire coaching staff for a second season is huge for returning players who don’t have to start out from square one with a new position coach or coordinator. They don’t have to figure out what their coach is looking for in meetings and at practice. They don’t have to learn new ways of communicating or adjust to whatever methods of teaching any new coach is going to have.

"The entire group can just pick up where it left off." [NBCSP]

How about a quick look at some film to cap things off?

Over the holiday weekend,  Reddit user u/NoFlagsFilm (@NoFlagsFilm on Twitter) posted the All-22 feeds of every big Jalen Hurts pass attempt from last season.

There are some well-placed throws in there, some throws that probably shouldn't have been made, and some others that were caught but the receiver had to come back or work a bit to go get.

But with some better reads and a bit quicker timing, there's potential there that you hope can be tapped into with DeVonta Smith and A.J. Brown now on either side.