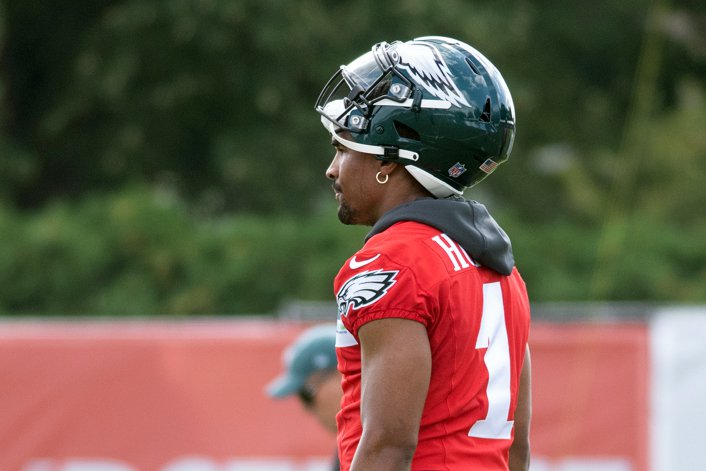 The Eagles ended their voluntary organized team activities on Wednesday. It was just their second session open to the media this offseason. The team breaks for several weeks, as they join the Bengals as the only two teams in the NFL to not hold mandatory mini camps this year. Training camp will begin on Tuesday, July 26.

To hold crazed Eagles fans over until then, here are my running observations from the final OTA day:

• During positional drills, I noticed that Gardner Minshew was wearing his jersey sleeves rolled up so that it looked like he was wearing a cutoff shirt. He's really leaning into the brand, huh?

• Wednesday was the first true special teams action that the media saw this summer. In honor of punter aficionado Jimmy Kempski, I logged the hang time of Arryn Siposs’ punts: 4.8 seconds, 4.1, 3.9, 4.4, 4.7, 4.6 and 4.7. Not bad times, but as Jimmy has said multiple times this offseason, it is a little perplexing that the team didn't bring in another punter as camp competition with Siposs given his rough showing in 2021.

• Jalen Reagor was not at camp on Wednesday, but punt returners seen catching punts from Siposs were Greg Ward Jr., Kenny Gainwell and Boston Scott, amongst others. When speaking with the media last Thursday, special teams coordinator Michael Clay didn't indicate that any one player had an early lead on the returner job and gently tried to push away concerns about Reagor's issues fielding punts last season, particularly in the playoffs.

• The part everyone actually cares about: How did Jalen Hurts look in the 7-on-7 action that the media saw? From my notes, I saw Hurts log 16 passes, 14 of which went for completions and three of which I'd say were "touchdowns." Let's get to it.

• Hurts throw No. 1: Hurts held on to the ball a bit too much, rolled right and found Quez Watkins for a short completion.

• Hurts throw No. 2: Sharp throw underneath in the middle of the field to Dallas Goedert between two defenders. It was a bang-bang play and Goedert unsurprisingly ripped right through the two of them. It was a quick throw and encouraging for Hurts, who struggled working the middle of the field in 2021. I gave the caveat in last week's observations that these practice takes are based on a super-small-sample size. The great plays from Hurts are fun and it's all part of being a fan to be amped about them, but they don't define him, nor do a few of the weaker throws he's made in front of the press. Still, if you're a Birds fan, June is all about getting hype, so enjoy the good stuff.

• Hurts throw No. 3: Hurts looked for Kenny Gainwell who was lined up out wide to the right, but the pass was incomplete. It was an immediate throw off the snap. It wasn't Hurts' greatest pass, a tad low, but it was still catchable. It's the type of play that if it occurred in a game, would have Eagles fans fighting in a Twitter thread over whose "fault" it was.

• Hurts throw No. 4: Greg Ward was working to his right before Hurts hit him in the middle of the field for a medium-ish gain.

• Hurts throw No. 5: John Hightower! Hightower had a hell of a practice on throws from both Hurts and Minshew (third-year QB Reid Sinnett and undrafted rookie free agent Carson Strong have also been at OTAs). Hurts hit Hightower between the hash marks on a comeback route. Solid play.

• Hurts throw No. 6: It was an immediate underneath throw from Hurts to Ward. Nothing spectacular there, but, hey, that's competency.

• Hurts throw No. 7: With Boston Scott lined up out wide to the right, Hurts found him for a four-ish-yard. It appeared to be his first read.

• Hurts throw No. 8: Hurts targeted Goedert over the middle, but the pass was broken up. The placement from Hurts could've been better.

• Hurts throw No. 9: Basically the same exact situation as throw No. 8.

• Hurts throw No. 10: Hurts found newcomer Zach Pascal, who was with Nick Sirianni in Indianapolis from 2018-2020, on a slant to the right. Really nice zip on the ball from Hurts.

• Minshew was in the mix for some second-team reps for a bit. A throw from him was tipped by Kyzir White, and fell into the arms of Davion Taylor, who was able to "return" the interception for a good chunk of yards.

• Hurts throw No. 11: Hurts' first read wasn't there (the Eagles do have some good defensive backs now!) and he did a quick checkdown completion.

• Hurts throw No. 12: Hurts rolls right and takes a load of time to get the ball out before throwing a diving pass that is caught. This is a situation where there's a give-and-take on how Hurts functions in a 7-on-7 setting. I'm sure the Eagles would like him to pristine in the pocket and just fire lasers in these looks, but that's just not who he is. This is a play where perhaps Hurts could've tuck it and run for seven or eight yards. His best traits are minimized in these makeshift setups. It's just something I want to keep in mind as camp draws closer and something that Eagles fans should do as well.

• Hurts throw No. 13: Okay, if you want to get hype up about Hurts and have that excitement carry over to your cookouts or beach sessions in the weeks to come, now's the time. John Hightower, my unofficial MVP of the day, caught a beautiful deep ball from Hurts, burning slot cornerback Avonte Maddox in the process for a "touchdown." It's the exact type of throw Eagles fans want him to make every time. A good sign!

• Hurts throw No. 14: Let your optimism run wild again... Hurts launched a nice deep ball that Watkins hauled in for another "touchdown." The offensive crew was vibing after that and illustrated some real energy on the sidelines that had been missing all day.

Immediate next throw: Another good deep ball that Quez Watkins hauls in.

• Hurts throw No. 15: Hurts dials up a deep ball once more, but it's an errant throw intended for Deon Cain. Eagles fans will want more of the previous deep balls and less of these.

• Hurts throw No. 16: The final play of OTAs for the Birds... Hurts hits Jason Huntley with an ideal touch throw on a wheel route for a "touchdown" yet again. The offense roars and the final whistle blows.

most unstoppable play in sports: THE WHEEL ROUTE.

Jalen Hurts hits Jason Huntley in stride going down the left sideline for a “touchdown.”

Uneven start to practice for Hurts, checking down a lot, but ends practice strong.