Fletcher Cox on release, re-signing by Eagles: 'I knew they wanted me back'

Back in March, Cox was signed, cut, then re-signed by the Eagles all within a couple of days. 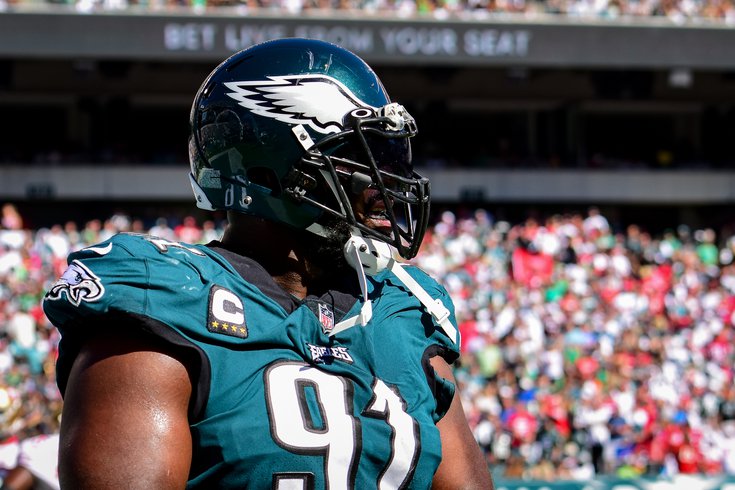 So what exactly happened there in March?

Fletcher Cox was an Eagle, then he wasn't, then he was again all in the span of a couple of days.

On March 17, the veteran defensive tackle was released by the team with a post-June 1 designation to prevent his $18 million salary from becoming guaranteed.

Then, on March 19, Cox was re-signed to a new one-year deal at $14 million. There were apparently a bunch of calls in the middle there too.

All a part of the process, Cox said Wednesday after Eagles OTAs. Granted, it's a bit of a strange process...

"It's just one of those things where you try to get things worked out," he told the media at the NovaCare Complex. "I knew the team wanted me here. It was a deadline before we could get things done, and just, with time, it's always ticking you only got a certain amount of time to get things done.

"Like I said, I knew they wanted me here, but it was just part of the process. Everything was, respectively, professional, and obviously, I appreciate the organization for that. We got everything figured out."

Cox has been a fixture of the Eagles' defensive line for a decade, and when it's all said and done, he'll go down as one of the franchise's all-time greats. But he turned 31 in December and, by his standards, is coming off an underwhelming 2021 with 35 tackles and just 3.5 sacks.

The former 2012 first-round pick knows his run with the Eagles will come to an end someday, but was pretty certain back in March that the day hadn't arrived yet.

"Everybody has their day, right? That day where they get released at a team they've been playing for for a long time," Cox said. "Obviously at some point, that day has to come, but I'm glad we were able to get things worked out."

He was a free agent for about 48 hours though and did get some calls — "When you're a free agent, teams reach out and it's part of the process, I get it," Cox said — but he ultimately knew time was going to smooth things over.

The Eagles wanted him back. That was enough for him.

"With everything it takes time, you know?" Cox said. "I think with that deal right there, it was just a time matter and I knew days or maybe a week or so before that we were trying to get things worked out — [agent Todd France] and [general manager Howie Roseman] and the organization — and it came to a point where four, five o'clock it was,  I was notified by my agent [of my release] and all that.

"I kind of knew what would go down, and so that's behind us. I'm here now, and I'm excited about the season."