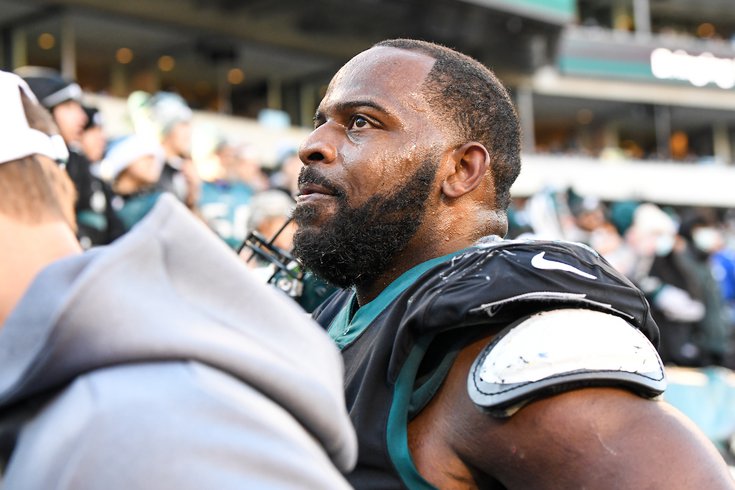 PHILADELPHIA - DECEMBER 26: Fletcher Cox #91 of the Philadelphia Eagles looks on during the game against the New York Giants at Lincoln Financial Field on December 26, 2021 in Philadelphia, Pennsylvania.

The Philadelphia Eagles have released 11th-year DT Fletcher Cox, according to a somewhat surprising report from Mike Garafolo of NFL Network.

Fletcher Cox was released by the #Eagles with a post-June 1 designation, sources say. At 4p, $18 million would have become fully guaranteed. Cox is now a free agent but the team and his representatives continue to have discussions about a possible return.

Just before the start of the 2021 regular season, the Eagles quietly restructured Cox's contract, giving them some added cap space in 2021 while also opening up some other future options. In the process, they also made him basically untradeable during the 2021 season.

Prior to that restructure, we suggested that the Eagles should explore Cox trade opportunities, on the premise that:

They also would have very likely gotten a decent return for Cox, who at the time was still thought of as a top 5-10 interior defensive lineman, even if he wasn't the elite player he once was. In July, we suggested a valuation of a late second-round pick, a cost that might seem silly now but was not met with much disagreement at the time.

Through the first half or so of the regular season, Cox looked disinterested on the field, and openly griped about his usage off of it.

He became the subject of trade rumors at the deadline, as Howie Roseman acknowledged during his after-season press conference.

"I think, first of all, it's our job to listen to everything and see if there are ways to improve our team," Roseman said. "Obviously, Fletcher is a great player. And teams... at the deadline were making calls. And for us, it's important. Our priorities are always going to be along the line of scrimmage, and obviously having him and [Javon] Hargrave, and you see the growth from Milton [Williams] inside, that's a huge part of our defense and a huge part of our priorities...

"We communicate with our players. They know when things are going on, we'll be honest. We have honest communication. Fletch knew what was going on. We communicated with him. He's a guy that was a big part of the success that we had down the stretch. He can continue to take over games and be an incredible player, and we expect more of that going forward."

As the season progressed and the Eagles started winning more games, Cox played harder and was more disruptive on the interior of the Eagles' defensive line, as Roseman noted.

Still, while Roseman mostly made good moves overall in 2021, Cox's restructure was his one major misstep. He'll now rightfully be criticized for not dealing him for an asset at the 2021 deadline.

Because of the complexity of the restructure (it was actually more like two restructures — in 2021 and proactively in 2022), it took the great Jason Fitzgerald of OverTheCap.com 25 minutes to try to explain it below.

Cox has been an incredible player for the Eagles over the last decade, and while the possibility exists that he will return at a discount, it feels much more likely that he'll move on.