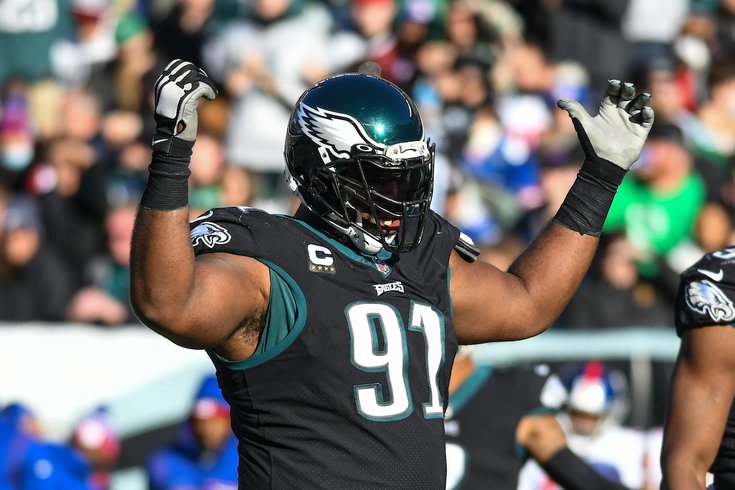 PHILADELPHIA - DECEMBER 26: Fletcher Cox #91 of the Philadelphia Eagles celebrates during the game against the New York Giants at Lincoln Financial Field on December 26, 2021 in Philadelphia, Pennsylvania.

UPDATE [4:15 p.m.] — A quiet start to the offseason got a little more interesting Thursday when news broke that the team was cutting Fletcher Cox with a post-June 1 designation.

Fletcher Cox was released by the #Eagles with a post-June 1 designation, sources say. At 4p, $18 million would have become fully guaranteed. Cox is now a free agent but the team and his representatives continue to have discussions about a possible return.

According to Adam Schefter, the Eagles could bring him back on a new cheaper deal.

Eagles are working to bring him back under a reworked contract, per source. But he also can now listen to others. https://t.co/0zVDNawjR6

Much more will follow from Jimmy Kempski as the story develops check back soon.

Update 2:06 p.m. BDN could be on the move! Nick Foles is due a sizable roster bonus from the Bears on Friday despite being buried on their depth chart. According to NFL Network's Mike Garafolo, it could lead to Foles being a cheap trade target for teams looking for backup QB help:

On the subject of QB roster bonuses, the #Bears' Nick Foles is due one tomorrow (just like Matt Ryan). It's $4m and it's guaranteed so Foles is going to get it. But it's half of what he's owed in '22, so he now becomes more attractive (i.e. cheaper) to teams in a potential trade.

No, I do not believe the Eagles would acquire Foles. Yes, it's a fun fan daydream, but the organization does not want to repeat the mistakes at the end of the Carson Wentz era where Foles' shadow simply loomed too large for Wentz to be himself. They're not going to do that to Jalen Hurts. I'd say Gardner Minshew might be the best backup quarterback in the league anyway. Minshew, coincidentally enough, replaced Foles as the Jaguars' starter in 2019 when the latter went down with a Week 1 injury.

Time is a flat circle...

Update 12:26 p.m. How about a three-time All-Pro and an eight-time Pro Bowler coming to Philly? 31-year-old Patrick Peterson, who spent 2021 with the Vikings, spoke about his potential fit with the Eagles in a segment on NFL Network (hat tip to Brandon Lee Gowton of Bleeding Green Nation for the transcription):

Q: If there’s a best team fit that you’re looking at, is it a team that has a chance to get deep in the playoffs and win a Super Bowl? What’s your criteria?

PETERSON: I really love what Minnesota’s doing. I think it’s going to be a lot of questions with the coaching staff turnover. But the players there, being in that locker room, being with those guys, seeing how much they care about putting that work Monday through Saturday and seeing the end result on Sundays. There’s nothing like being around a group of guys like that. So, ideally I would like to stay, because I’ve been around that locker room, I know how those guys operate.

But, other than that, just looking around …

Kansas City, I don’t think would be a bad spot.

I don’t know what Dallas has opposite of [Trevon] Diggs but I know they have some young corners over there.

I thought Tampa would be in the mix but [they] signed [Carlton] Davis back. Kind of knew that was out of the picture.

I think Philly is a good fit, like some of the things that they do.

So, there are a lot of teams out there that say they have interest, but money talks.

Peterson is not quite the player he was during his prime in Arizona, but should be a solid CB2 option across from Pro Bowler Darius Slay and certainly an upgrade over Steven Nelson, who is currently a free agent.

As did new "weapon" Haason Reddick:

Update 10:00 a.m. Could Deshaun Watson, still facing numerous civil suits for sexual misconduct, be headed to the NFC? The Saints are increasingly looking like a landing spot for the 26-year-old quarterback.

The Saints brass met with Deshaun Watson a second time last night, according to sources.

The #Saints have been the favorite from the start. Now, an all-out blitz to try to close it out … and keep Watson from their NFC South rivals. https://t.co/tf75AjH6kO

New Orleans is also clearing salary cap space to prepare themselves for a potential Watson acquisition:

The Saints are now officially at $29.9M in cap space 👀

The Eagles will play the Saints at home this upcoming season.

Not to bury the lede on the biggest Eagles story of the day, our own Jimmy Kempski getting the scoop on Howie Roseman's contract extension, but NFL free agency rolls on to Day 4.

Contract details have emerged for All-Pro Jason Kelce's new deal, per the invaluable OverTheCap website. The NFL notoriously has the most convoluted contract language of any of the four major North American sports and that is only amplified when Roseman is the one drawing up those deals. You don't necessarily need an MBA to decipher them, but there's a learning curve on these deals. Here's a succinct summary of Kelce's contract:

** Not a FA after this season

Roseman, fresh off a new deal himself with more job security, should be primed to make another move in free agency. The Haason Reddick signing remains the lone big splash the Birds have made.

Will the Eagles land more help this week in free agency? Receiver? Linebacker? Safety? Only one way to find out! Follow along all day long with our live stream and open thread: