"Indeed, get your popcorn ready and tell Micah Parsons he can get ready for this s***!" 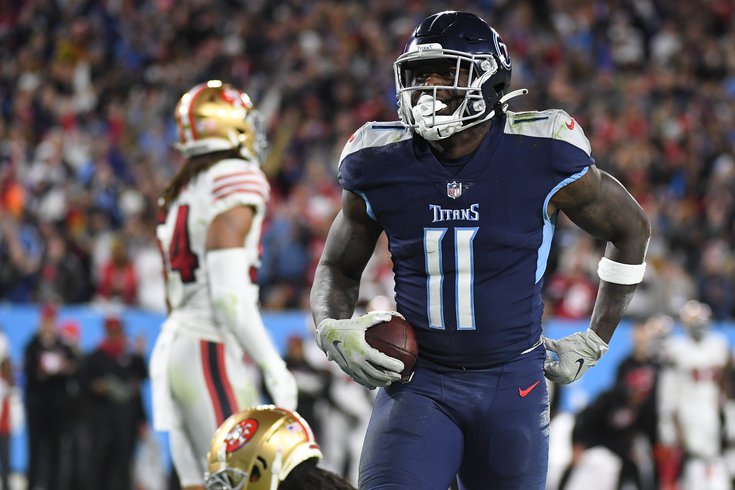 It's still three months to Week 1 but the trash talk has already begun.

As DeVonta Smith's celebrity softball game wrapped up at Coca-Cola Park up in Allentown on Saturday, new Eagle A.J. Brown grabbed the mic for some parting comments. (credit to Reddit user loco1989 for the video.)

"Indeed, get your popcorn ready and tell Micah Parsons he can get ready for this s***!"

A T.O. callback and a swear over the P.A.? Oh yeah, he's definitely getting acclimated to Philly.

Parsons, who made the Pro Bowl and won Defensive Rookie of the Year in his debut season with Dallas, captained the team opposite of Smith for Saturday's game. It was an obvious move to play up the Eagles-Cowboys rivalry for the crowd, but Smith said in a press conference a couple of weeks ago that the invitation was also extended because of the linebacker's roots in Harrisburg and then Penn State.

Plus, they're from the same draft class. Smith went 10th overall to the Eagles in 2021 out of Alabama. Parsons went to Dallas two spots later at 12. The Eagles actually traded up with the Cowboys to land Smith at pick No. 10, further intertwining the two.

Smith caught 64 passes for 916 yards and five touchdowns last season, and after trading for Brown at the draft, the Eagles should have a scary combo lining up at wideout come September.

As our own Shamus Clancy observed from the Eagles' OTAs on Friday:

"Brown and DeVonta Smith both wearing visors? Aside from the obvious talent this duo presents, the best I've seen in my time watching the Eagles, their vibes are tremendous."

Parsons and the Cowboys will have until Week 6 on Oct. 16 to brace for that.

Jalen Hurts, entering his second year as the starting QB, was also airing it out on Friday. Here he is on Saturday hitting a walk-off bomb.