What they're saying: Eagles trade for A.J. Brown was positively shocking 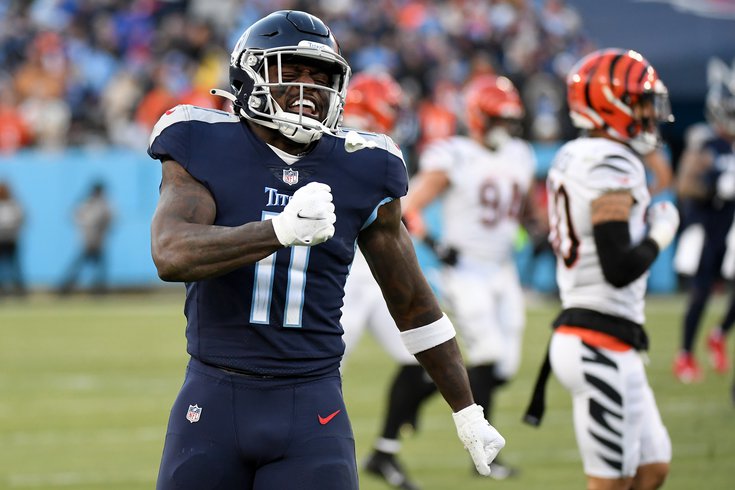 Perhaps some day, Eagles fans will look back at this Thursday — April 28, 2022 — in the same light as Phillies fans and December 16, 2009, the day the team traded for Roy Halladay.

That is how big an impact Howie Roseman's decision to trade for former Titans Pro Bowl wide receiver A.J. Brown could make on the trajectory of the entire franchise. And sports books see it too, with the Eagles Super Bowl odds dropping 20 percent from 50-1 to 40-1 according to Ceasars.

The Eagles traded up for big defensive tackle Jordan Davis too, Thursday, but the Brown trade will surely be the driving force for conversations about the Birds for weeks and weeks (and months, and possibly years) to come.

Here's a whip around the horn and look at some takes in the immediately aftermath of the blockbuster trade:

We have to start with this one. Jason Kelce found out about the Brown trade live on Bleacher Report's Draft Night and it is just awesome.

"I can't tell you how much this is going to make us better," Kelce said after yelling at his kid to get away from blocking his view of his TV" Howie is a man on a mission right now he's making things happen and I am a big fan. HERE WE GO BABY HERE WE GO."

“THIS IS BIG” @JasonKelce and @AdamLefkoe were LOVING the A.J. Brown Eagles trade 😭

Tap in to B/R Gridiron Draft Night now for live reactions to every pick before everyone else https://t.co/fAH0lWnaoT

Over at the Worldwide Leader, draft guru Mel Kiper Jr. wrote about his winners and losers from the first night of the NFL Draft, the the Eagles not surprisingly were on the good side. However, that labeling didn't come without a little bit of a backhanded compliment:

Staying in the state of Pennsylvania, the Eagles were able to get a young, proven wide receiver in A.J. Brown by trading pick Nos. 18 and 101. They've struggled to draft receivers lately, so this could be a better bet -- though they also had to give Brown a huge contract extension. [ESPN]

What would it have been like to be a fly on the wall around 9 p.m. on Thursday night? According to Roseman's own recounting on his media conference later that evening, this entire deal — the trade and the extension — was consummated on the fly. And it almost didn't happen. The Eagles needed to get Brown to agree to an extension as they were getting the Titans to agree to the swap of assets. Roseman pulled it off in the nick of time.

The contract piece of the trade really complicated matters. Essentially, Brown had the power to veto the trade simply by rejecting the Eagles’ contract offer.

Then again, when a deal includes $57 million in guaranteed money, it’s pretty hard to turn that down.

“A lot of credit to A.J. and his agents for getting this deal done as well because this wasn't like we had weeks to do,” Roseman said. “It really kind of came about quickly here.”

The Eagles have coveted Brown since the 2019 draft, when the Titans picked him at No. 51 – two picks before the Eagles took Miles Sanders and six picks before they drafted J.J. Arcega-Whiteside.

Although the trade and the contract were both finalized as the draft went on Thursday night, the seeds had been planted for a while.

“We had a plan, and so it wasn't like anything was on the fly,” Roseman said. “We had a very detailed plan. I thought this whole group did an unbelievable job of organizing and detailing everything. [NBC Sports Philadelphia]

It seems clear that the Eagles won the trade — acquiring a 24-year-old stud wide receiver, and locking him in at a market rate for four years (after 2022) — and only giving up a first and third round pick. But from the Titans' perspective it's a win as well. Without any room to pay Brown, they were able to draft a rookie wideout in the first round to try and stay competitive. Still, the Eagles are the ones walking away feeling like champs this weekend.

“I am confident we went to the extreme to try and keep A.J. here," Vrabel told the media. "I was involved with the process the entire time. We’re going to continue to coach our guys, develop them, make it about the team and this is just another example of making tough decisions that hopefully, in the long run, make our team better. I know it probably doesn’t get received like that publicly, but this was a difficult process to get through. I know what the gap we had to bridge was. This wasn’t easy."

The Eagles had to feel pretty good. They didn't have to give up too many picks to land a receiver who, if he stays healthy, could be one of the NFL's 10 best. They paid him right away, giving him a $100 million deal over four years with $57 million guaranteed, according to multiple reports. That's not ideal in a sport that has a salary cap, but Brown is a difference-maker.

The Titans won't spend as much on Burks, but he probably won't have the same impact either. [Yahoo]

The best of any team

The Eagles, according to Kaelen Jones, had the best haul of the draft's first night and it honestly may not even be close. Here's more on how big an impact the acquisition of Brown will have on the Birds:

Additionally, Brown’s acquisition gives Hurts another star-caliber receiver. With Smith and tight end Dallas Goedert already in tow, the Eagles will get a complete look at Hurts and assess whether or not he truly has what it takes to develop into a franchise QB ahead of the final year of his rookie deal—and before having to usegetting a chance to utilize one of their two 2023 first-round picks to potentially land a replacement from a draft that’s expected to tout Ohio State’s CJ Stroud and Alabama’s Bryce Young. Once again, the Eagles have shown an ability to balance prioritizing a long-term build and making immediate-impact transactions. Perhaps it won’t pay off in 2022, but Roseman clearly has a plan in place for Philadelphia to succeed. [The Ringer]

Okay now let's talk about what really matters — fantasy football. Pro Football Network wasted no time diving into the fantasy implications of everyone involved in this trade, and while it is extremely good news for Jalen Hurts' draft stock (and even better for his dynasty value), the same apparently can't be said for Eagles now WR2 DeVonta Smith and for Brown himself.

DeVonta Smith’s 22% target share last season earned him just 103 targets, as the Eagles only attempted 494 passes. The Titans are also extremely run-heavy, but they attempted 535 passes. That’s a sizable difference.

Now, Smith will be lucky to exceed a 20% target share, as Brown should hit the 25% mark. If Hurts gets over 500 attempts, Brown could see 125-135 targets. If he can recapture his rookie efficiency, where he averaged 12.5 yards per target (second-highest in the NFL), he can be a fantasy WR1. However, we don’t like to rely on efficiency.

Brown’s efficiency has dropped each of his three NFL seasons. He averaged 10.5 yards per target as a sophomore and 8.3 yards per target in his third season. The most likely outcome is he’s a mid-to-low WR2.

As for Smith…yikes. Hurts cannot sustain three quality fantasy receivers. Between Brown, Smith, and Dallas Goedert, someone will get the short end of the stick. I don’t think Smith gets vaporized, but his ceiling likely drops from WR2 to mid WR3. [Pro Football Network]