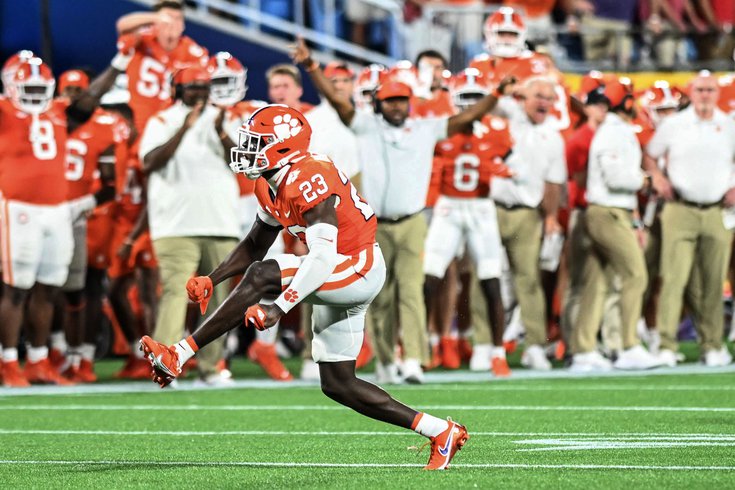 In the first round of the 2022 NFL Draft, the Philadelphia Eagles traded up for Georgia DT Jordan Davis, and traded for former Titans WR A.J. Brown. Somehow, they still have second- and third-round picks, and they didn't trade any picks in future years.

Here are 15 players who could make sense for the Birds in Round 2. The Eagles will pick 51st overall, which is the 19th pick in the second round.

• Malik Willis, QB, Liberty: Willis is sort of a wildcard player in this draft, in that it's not expected that the Eagles will take a quarterback early, and yet there's a decent argument to take Willis, specifically. He's a dual-threat quarterback whose running style is reminiscent of Jalen Hurts, in that they're both strong runners who can shake tacklers. He also shares some of Hurts' passing traits, in that his decision-making and accuracy need to improve. What sets Willis apart from Hurts, however, is his pure arm talent, which gives him more upside.

• Andrew Booth, CB, Clemson: Booth is physical and athletic, and he plays with swagger, confidence, and energy. has the speed to run with receivers down the field, and he competes on contested catches. On the downside, while he has shown ball skills and the flare for the incredible catch, he only had 5 career INTs, which in fairness, was spent at times playing behind other future NFL corners.

• Arnold Ebeketie, EDGE, Penn State: Ebiketie immigrated from Cameroon and originally enrolled at Temple, where he didn't play much in his first two seasons, but had 42 tackles, 4 sacks, and 3 forced fumbles during the COVID-shortened 2020 season. He transferred to Penn State in 2021, and had 62 tackles (18 for loss), 9.5 sacks, 2 forced fumbles, and 2 blocked kicks in his lone season with the Nittany Lions. He is undersized (6'2, 250), but has some explosive athletic measurables.

• Nakobe Dean, LB, Georgia: Dean patrolled the middle of the field in Georgia's smothering, national championship defense in 2021. He's undersized, and while he did not work out at the Combine or Georgia's pro day, he's explosive on tape. Dean can cover running backs out of the backfield and blitz in the passing game. Against the run, he can either slither through blocks and make tough tackles in the box, or in pursuit outside of the tackles.

• David Ojabo, EDGE, Michigan: Ojabo is inexperienced, as he has only played in 14 career college games. He was born in Nigeria, and moved to Scotland, before heading to the United States for high school. That makes his 2021 breakout season for Michigan all the more impressive, as he collected 35 tackles, 11 sacks, 5 forced fumbles, and 3 batted passes. He tore an Achilles at his pro day, dropping him from a potential top 15 pick into (likely) the second round.

• Daniel Faalele, OT, Minnesota: At 6'8, 384 pounds, Faalele will become the biggest human in the NFL when he is drafted. Oh and HEY, he's a former rugby player from Australia who doesn't have much American football experience! Remind you of anyone?

• Jalen Pitre, S, Baylor: Pitre is a versatile defender who can play safety and slot corner, and who was all over Baylor's stat sheet in 2021. He had 18.5 tackles for loss, 3.5 sacks, and 3 forced fumbles, which would both be impressive for a defensive lineman, to go along with 7 pass breakups and 2 INTs. Pitre is the type of defender who makes it easier on defensive coordinators to disguise coverages and show an assortment of defensive looks. He could be what K'Von Wallace has yet to show so far in his two years with the team.

• Boye Mafe, EDGE, Minnesota: Mafe is an athlete who impressed at the Combine and Senior Bowl. During the 2021 season, he finished with good-not-great production, with 34 tackles, 7 sacks, and 1 FF in 12 games.

• Christian Harris, LB, Alabama: Harris played some safety, cornerback, and wide receiver in high school before settling in as an undersized linebacker in college. He was a tone setter in Bama's defense, with the athleticism to run sideline to sideline in the run game, and the ability to get to wide areas of the field in coverage.

• Jaquan Brisker, S, Penn State: In three seasons (34 games) at Penn State after transferring from Lackawanna College, Brisker had 151 tackles (10 for loss), 5 INTs, and 14 pass breakups. He's a good athlete with size, a reliable tackler who will lay an occasional big pop, he has ball skills, and he has flashed some flair for the timely huge play.

• Breece Hall, RB, Iowa State: Hall led the nation in 2020 with 1,572 rushing yards. He was second to 2021 first-round pick Najee Harris with 21 TDs. In 2021, he rushed for 1472 yards and 20 TD. He has decent bulk at 5'11, 217, and his standout trait is something that many would argue Miles Sanders lacks — vision. Hall's physical skill set (size, speed, and ability to change direction) are all fine and good (4.39 40), but he is a savvy, patient runner who knows how to set up blocks and weave his way through traffic. He is also a factor in the passing game, as he has 82 receptions for 734 yards and 6 TDs in 36 career games. Potential star behind the Eagles' offensive line.

• Kenneth Walker, RB, Michigan State: At 5'9, 211, Walker is short but dense, and well-built. He should be able to handle the physicality of the NFL. As a runner, he has good short area explosiveness as well as terrific balance, and he can make defenders look silly with his repertoire of jump cuts and other ankle-breaking moves. He also blazed a 4.38 40 time at the Combine. 263-1636-18 as a rusher in 2021, 13 receptions for 89 yards and 1 TD as a receiver.

• Logan Hall, DL, Houston: Houston has had four defensive players get drafted in the first round since 2013, including DE Payton Turner (28th overall to the Saints in 2021) and DT Ed Oliver (9th overall to the Bills in 2019). Hall is probably a little too raw and lacking ideal production to go Round 1, but he's a likely Day 2 guy with intriguing size, power, quickness, and inside-outside versatility.

• Drake Jackson, EDGE, USC: Explosive speed rusher with disappointing production, though in fairness he did not have the same kind of "pin your ears back and go get the quarterback" luxury that other pass rushers in this class did.