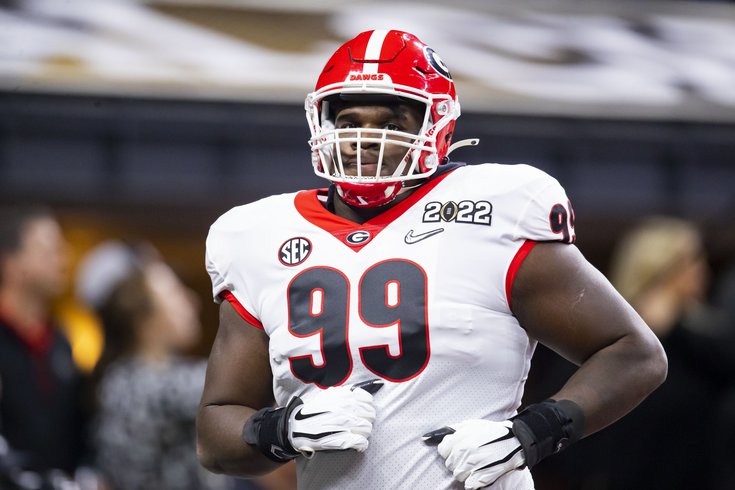 With the 13th pick in the 2022 NFL Draft, the Philadelphia Eagles selected Georgia DT Jordan Davis. They traded up to get their guy, as it cost the Birds three picks to move up two spots from pick No. 15 to pick No. 13.

There are many who believe that Davis is just a run stuffer who will play a very limited number of snaps. I would disagree with both assessments. Davis played on one of the most talented and deepest defenses in NCAA history. As such, he often gave way to very talented pass rushers who kicked inside on passing downs. Hell, a certain first-round pick in this draft (Jermaine Johnson) transferred out of Georgia just so that he could play.

As a pass rusher, Davis has extreme size, strength, and quickness. He's going to make plays, but even if he never becomes a guy who puts up big sack numbers, he can still be very effective. He is a player that centers will not be able to single block, so he'll at least provide one-on-one matchups across the board against the pass when he's doubled. Against the run, if you plop this dude down in the middle of the line, thus allowing Jonathan Gannon to commit fewer resources toward stopping the run, he would make a lot of sense in the Eagles' defense.

But at a more basic analytical level, Davis is a "unicorn." There may not be anyone on Earth his size who can do what he can do athletically, and in my opinion, the Eagles were smart to make a bold move to go get him.