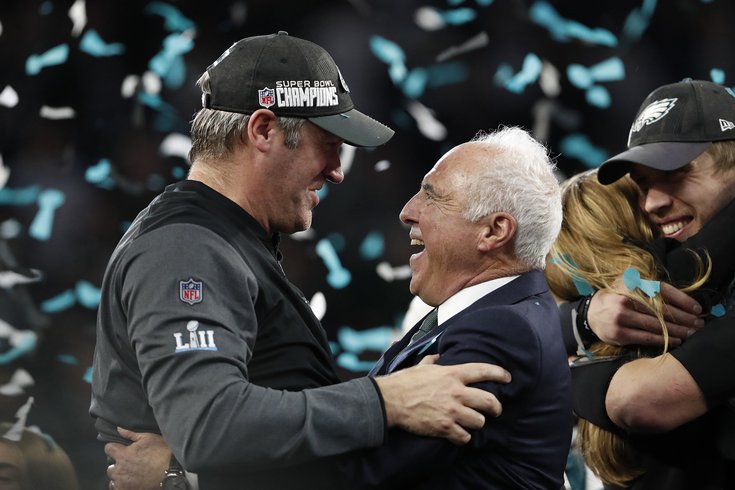 He was overwhelmed, laughed at and written off as a fruitless nostalgia play.

After the buzz of the Chip Kelly era burned out, the Eagles needed a new head coach. After a coach or two turned down offers to run the team, the franchise "settled" upon Doug Pederson. Pederson spent a year as the Eagles' quarterback in 1999, worked as an assistant under Andy Reid in both Philadelphia and Kansas City and came to the Birds in the hopes of bringing some "emotional intelligence" to the locker room in the aftermath of Kelly's firing. The Eagles hoped this move would go back to the roots of the franchise's most success period under Reid.

In Pederson's opening press conference where he was announced as the Eagles' 23rd head coach, the former NFL signal-caller looked uncomfortable, unready for the blistering Philly media and later drew questions about whether he should even be a head coach in this league.

747 days after he irritating media members and fans alike, Pederson hoisted the Lombardi Trophy, the first Eagles coach to ever do so. Pederson was hired to bring back the stability of the Reid era and accomplished something Big Red could never do with the Birds.

It's clear what I'm getting at: Pederson is the best coach of my lifetime in Philadelphia. "Best Week" sure is a lot more fun than "Worst Week" here on PhillyVoice!

It's a shame that Pederson's tenure with the Eagles ended in as rough fashion as it did. The most important coach in the team's history, hell, maybe the most important coach in the city's history outside of Connie Mack, spent his final game in a souring tankfest in Week 17 of the 2020 season. It was an unfitting end for a man whose peak transformed a city of football fatalists into the proudest, cockiest bunch of fans in the world.

In last Wednesday's "Worst Week" story about former Sixers head Eddie Jordan, I wrote that Jordan simply exemplified the irrelevance that the Sixers were mired in for nearly a decade. Pederson, conversely, took the Eagles from perpetual choke artists and disappointments into an offensive juggernaut that scoffed at the idea of being an underdog.

On Pederson's best day, he out-coached the greatest defensive mind of all time and beat him as impressively as anyone had ever done. For that day alone, Pederson rightfully has a statue outside of Lincoln Financial Field. He completed the most improbable, most electric championship run in Philadelphia history, one that transcended merely sports and became a cultural touchstone for this city, the ultimate "Where were you for the Super Bowl?" question that anyone in the Delaware Valley could answer.

I would always get in arguments on Twitter with random fans across the country or national media people about Pederson. Rams head coach Sean McVay got all the hype in the world during Pederson's time in Philly, despite the Eagles beating those Rams convincingly in their 2017 and 2018 matchups. The idea at the time that McVay was better than Pederson was outrageous to me. Going against Bill Belichick in the big game, Pederson's offense scored 41 points with a backup quarterback. The following year in the Super Bowl, McVay's Rams managed a measly three points. Three! How could they compare?

Those same people told me that was the argument I had. It reminded me of Jason Segel's character in "Bad Teacher" where he was arguing with a kid about Michael Jordan vs. LeBron James. In talking about Jordan's six championships, Segel's character screams, "IT'S THE ONLY ARGUMENT I NEED!"

Yeah, Pederson's Philly tenure ended on a downer and McVay won his first Super Bowl this past season, but I'm not letting that get in the way of how transformative Pederson's 2017 season was for all Eagles fans. He took a dude who almost quit football because he couldn't catch on anywhere and turned him into a Super Bowl MVP who outplayed Tom Brady. Nick Foles deserves the endless devotion he'll receive in Philadelphia forever, but credit to Pederson for shifting the Eagles' offense to put an afterthought backup QB in a position to save the soul of the city.

It's hard not to be a little bummed that Pederson is no longer with the Eagles. When the Birds won the Super Bowl, I assumed that head coaching job was his until the day he chose to hang up his whistle. Alas, that wasn't the case. The Nick Sirianni hire looks to be the refresher that was needed for the franchise, but I can't help but wonder what Jalen Hurts' development would be like if Pederson continued with the team beyond 2020.

Perhaps it's faith misplaced, but I have confidence that Pederson will turn the Jaguars around this year and have Trevor Lawrence on the upward trajectory that proves he was worth taking with the first-overall pick in the 2021 NFL Draft. I'm picking them to win the AFC South, regardless if that's a call that leans with my heart more than my head. I welcome the media frenzy that Pederson's return to the Linc will bring in Week 4. It'll be a reminder that it's worthwhile to reminisce about the glory days and that banners hang forever.

How about that "clown" Mike Lombardi, huh?