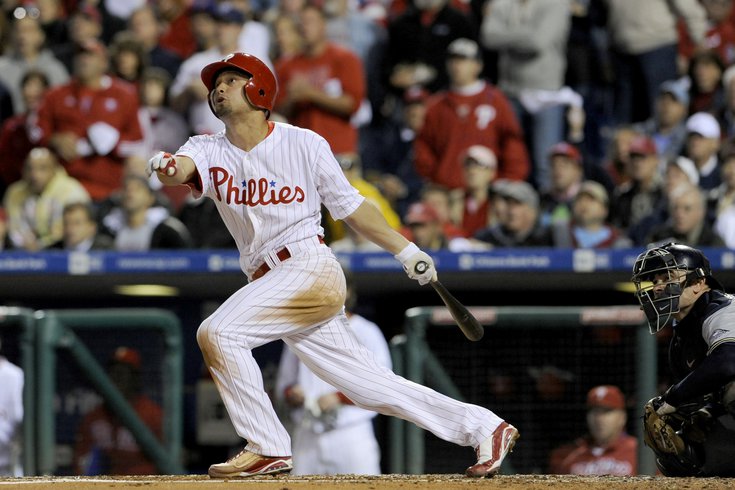 Shane Victorino rips a grand slam off CC Sabathia in Game 2 of the 2008 NLDS.

Best Week continues! On Monday, I wrote about the best game I ever attended, the legendary 38-7 game where the Eagles spanked the Vikings in the NFC Championship Game. Coming on the heels of "Worst Week," it was refreshing to finally write about Philly sports triumphs. I'm going to write about one of my favorites games I saw on TV now.

The Eagles winning Super Bowl LII is obviously the best game I ever watched and it's the most important sporting event in the history of the city, but I waxed poetic about the 2017 Birds for the 38-7 story, so the material would've been too similar. I'm lucky enough in life that I've seen some iconic performances in person, including the Phillies clinching Game 5 win over the Rays in 2008 and Roy Halladay's playoff no-hitter in 2010. Those all could be easy choices for any Philly fan out there. I'm going with a different moment from that '08 Phillies run: Game 2 of the NLDS.

The Phillies had made the playoffs for the first time in 14 years, and the first time in my life, in 2007. The Rockies promptly swept them in three games. The Phils came back with a vengeance like Ghost Rider in 2008 though. The won their first playoff game since Game 5 of the 1993 World Series in Game 1 of that NLDS series against Milwaukee. Cole Hamels pitched an eight-inning, one-run, nine-strikeout gem. These were no longer the Phillies of my youth.

In Game 2, the Brewers had CC Sabathia on the mound. Acquired midseason from Cleveland, Sabathia was otherworldly for Milwaukee during the stretch run. He started 17 games with three complete game shutouts and a minuscule 1.65 ERA. Taking down this version of Sabathia would be a Herculean task.

These Phillies, oozing "Team of Destiny" vibes, were up for the challenge.

The Brewers got out to a 1-0 lead in the first inning. Not great! It was early though. Come the second inning, it was time to break out the fireworks. Back-to-back doubles from Jayson Werth and Pedro Feliz tied things up at 1-1. Brett Myers, the Phils' starter that day, forced a nine-pitch walk against all odds against a dude who was throwing the ball like the best pitcher on the planet that season. Team leader Jimmy Rollins forced another walk immediately after. That brought centerfielder Shane Victorino to the plate with the bases loaded and the game tied.

Victorino's path to Phillies immortality wasn't smooth. He was a sixth-round pick for the Dodgers in 1999. He was a 2002 Rule 5 pick from the Padres in 2002 before being a Rule 5 pick yet again for the Phillies in 2004. He took over the right field job in the middle of the 2006 season and was the full-time starter there during the team's playoff run in 2007. With then-starting CF Aaron Rowand departing in free agency, 2008 was the Flyin' Hawaiian's first year as the Phillies' full-time centerfielder.

With the count 1-2 against Sabathia, Victorino turned on a pitch that landed in the left field stands:

I was 14 and screaming my head off. My dad, all 6'4 and 265 pounds of him, leapt in the air like he was Charles Barkley crashing the offensive glass. Our dog was barking her head off. It was a "Holy [BLEEP], they're going to actually win the World Series" moment. I was young, but I had yet to see a Philly team win a championship in my lifetime. The Eagles, Sixers and Flyers had all been in their sport's respective championship game, but the Phils hadn't. They were an afterthought in the larger baseball world.

Atlanta had owned the NL East my whole life and I spent my Octobers enthralled with the Yankees-Red Sox rivalry with the Phillies perpetually sitting out of postseason ball. I didn't know what it was like to win. This had never happened. These type of moments, the little plays and turns and strokes of luck that every championship team needs to hoist that trophy, were something I couldn't wrap my head around. This is happening for "us," Philly fans? How? Why? Is that what other fan bases are used to?

The Phils were up 5-1. Milwaukee tacked on a run in the seventh, but the beastly trio of Ryan Madson, J.C. Romero and Brad Lidge shut things down in the eighth and ninth innings for a 5-2 win. The Phillies were in the driver's seat and on their way to winning a playoff series for the first since before I was born. How was this real?

Perhaps it was the game where Matt Stairs "ripped one into the night" that Phillies fans were convinced the team was winning the World Series, but it was that matchup where Victorino crushed the Brew Crew that I knew in my heart of hearts that I would finally attend a championship parade. It's a complete inverse of last Tuesday's "Worst Week" story where I finally realized that Chip Kelly would never lead the Eagles to the Promised Land. On that beautiful October night, however, it was the first day of the rest of my life as a Philly sports fan.