5 awards from the Phillies' series sweep over the Angels 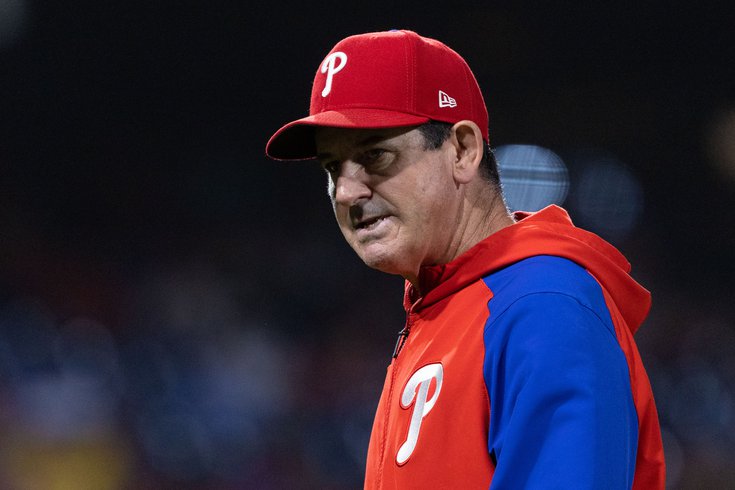 Over the last few weeks, I've been burying the Phillies and rightfully so.

The organization's issues run deep and consistent contention isn't as easy as simply firing Joe Girardi and throwing a boatload of cash at buzzy free agents. Still, Giardi's canning was deserved and it provided a boost for the Fightins over the weekend, as they were able to sweep the Angels and win their first series since the middle of May. The Phils were lighting up the scoreboard and ringing the bell in the process, improving to 25-29.

As I do, I'll give a quick series recap and hand out five awards for these Phillies.

• On Friday night, the Phils clobbered the Halos, hitting five home runs in a 10-0 win. Kyle Schwarber homered on the very first pitch a Phillies batter saw to kick off the post-Girardi era with a bang.

• The Phillies picked up where they left on Saturday evening, batting around and scoring five runs in the first inning. That proved to be the difference in a 7-2 victory.

• COMEBACK SZN on Sunday! The Angels built an early 5-0 lead. It slipped away in very Phillies fashion for them though. A grand slam from Bryce Harper tied things up at 6-6 in the eighth inning, but the Angels were able to throw another run on the board in the top of the ninth. With two men on base, a full count and two outs, rookie Bryson Stott ripped a three-run shot to right field for the walk-off 9-7 win in the ninth!

Is Rob Thomson the next Joe Torre? Of course not. He probably won't even be the manager come 2023. I'm not sure what impact he's actually having beyond his driver's license not saying "Joe Girardi" on it. Having new blood in the dugout in place of Girardi certainly gave the Phillies a spark though. Sure, the Phillies players weren't saying, "Joe Girardi sucks. Let's play terrible on purpose to spite him," and correlation doesn't always indicate causation, but bringing anything fresh to this stale franchise is more than welcomed.

In "The Office," Michael Scott once said, "Sometimes what brings the kids together is hating the lunch lady." Though I can't say for sure, maybe that was the case with this Phillies roster and Girardi.

I wonder what Bryce Harper is implying here... 🤔

What an electric series from Stott. He hit his first career home run during Friday's 10-0 rout. He was the hero on Sunday with a three-run shot that sent Phillies fans home in a frenzy:

Stott is hitting just .159 28 games into his major league career, but maybe this is the turning point that has him thriving after being the MLB's 45th-ranked prospect coming into this year.

How absolutely incredible is this dude?

They cannot keep wasting his prime. They simply cannot. Not making the postseason four years into Harper's tenure in red pinstripes is totally unacceptable. Harper has a torn UCL and can't play the field, but he is raking just as much as he was during his 2021 MVP campaign. He might win the award again! The franchise is failing him and, in turn, the fan base though without properly building a contender.

Alec Bohm looked like he just got attacked by a vampire following an anger-induced injury on Saturday that left him with a bloody neck:

Alec Bohm cut himself after slamming his bat in the dugout pic.twitter.com/X2u9fxhZaN

I'd probably avoid doing that again in the future, Alec!

From Mike Trout's rookie season onward, it would've been hard to find a bigger Trout fan than me. I bought into the Millville, New Jersey native's extreme #FromHere energy. I loved that the life of one of the most talented baseball players to ever live essentially revolved around being an Eagles fan. It fell as if Trout was a true Philadelphian (though Millville is a good hour's drive away from Citizens Bank Park...) and one of us, a guy who would never stray from his roots no matter where fame took him.

I assumed that Trout would eventually come to Philadelphia to sign with the Phils as soon as he could possibly reach free agency. How couldn't he? This was his whole brand! Could the Phillies really have the two biggest players in the sport in Trout and Harper patrolling the outfield together? Imagine telling yourself that back in 2012 when they were young phenoms winning their respective league's Rookie of the Year awards.

Alas, Trout signed a contract extension worth $426.5 million in March 2019, tying himself to the Angels through his age-38 season. At the time, it was the largest contract in the history of professional sports. I get why he signed it. It's hard to turn down almost a half-billion dollars! Los Angeles is beautiful year round. He could live in anonymity amongst the biggest stars in the world in Southern California. Trout might be on the 🐐 trajectory, but he could likely walk down a street in L.A. without someone turning their head. All of that combined with being able to do literally anything that you want because you're filthy rich is hard to turn down.

My issue: your whole identity can't be "I'd die for Philly sports" and then do that. Whatever. Perhaps he likes playing for a team that never makes the playoffs, which keeps expectations low and keeps the blame off his back and he can spend his falls watching the Eagles at Lincoln Financial field rather than playing postseason baseball. He's obviously still an all-time incredible player and I went to CBP on Saturday night specifically so I can say that I've finally seen him play in person. It just sucks he chose to remain in L.A.

Maybe he can come to Philly be a 39-year-old designated hitter who's built like 2002 Levon Kirkland while bashing 30-plus homers? That dream is underwhelming though.

It was rough series for Trout's homecoming, as he went hitless in 12 at-bats with seven strikeouts.

The Phillies are off Monday and will make a trip to Milwaukee to face a first-place Brewers team with the three-game series starting Tuesday night. Ranger Suarez and his 4.69 ERA is scheduled to make the start for the Phils.