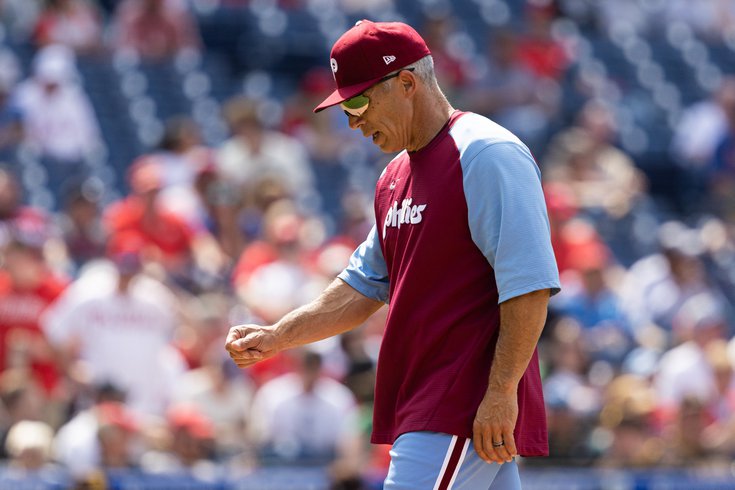 Manager Joe Girardi was fired by the Phillies on Friday.

Joe Girardi is out as the Phillies' manager, the club announced Friday morning.

Bench coach Rob Thomson will serve as interim manager for the rest of the season and Mike Calitri has been promoted from quality assurance coach to bench coach. Coaching assistant Bobby Meacham has also been let go.

At 22-29 and 12 games back of the NL East-leading Mets, this was far from the start the Phillies were expecting, definitely not after spending millions and blowing past the luxury tax threshold for a lineup that was built to hit its way to October.

But they're struggling to do that, along with most everything else.

The club had dropped five straight against the Mets and then the Giants prior to Wednesday's 6-5 win, capping off a brutal month of May that saw them go 10-18 in a stretch rife with inconsistent bats, fielding miscues, and still disastrous relief pitching. In their last 10 games, they're 3-7.

"I can look back on this last week when we were 3-7, and I think realistically we probably should've been 7-3," said Girardi, who still called in for his weekly appearance on MLB Network Radio despite his firing. "Well, that's gonna fall on me because we weren't and I understand that.

"I just pray that they get better and they get to the playoffs."

"I just pray that they get better, and they get to the playoffs."

Girardi was already on the hot seat when the Phillies decided not to pick up the 2023 option on his contract in the spring, and as the team's postseason-or-bust expectations rapidly began sliding toward bust this past month, the seat hit supernova.

It was time, team president Dave Dombrowski believed, for a new voice.

"We've been a club that has struggled," Dombrowski said in a press conference Friday afternoon. "I'm disappointed — I mean, I put the club together — I think we're better than what we've played. But to me, I think the most important part is we're going to turn this around and I think we still have the capabilities to do it.

Thomson, who was Girardi's bench coach here in Philadelphia and with the New York Yankees before that, has some managing experience to lean on. Back in 2008, just days into Girardi's first year in New York, Thomson had to fill in as an emergency manager for two games against the Tampa Bay Rays on April 4-5 while Girardi dealt with an upper-respiratory infection. The Yankees lost both matchups.

The remainder of the 2022 season, however, will be Thomson's first extended shot at managing, and his task of righting the ship will start with this weekend's series against the visiting Angels.

"I like to think that I'm prepared and I'm a good communicator with these guys," Thomson said Friday. "The plan is to make sure that all these guys know where they're supposed to be at any given time whether it's our bullpen, the lineup, whatever it is. I just want to make sure that the guys are prepared.

"This is a good club. We haven't played consistently yet. We've played good for short periods of time, but we need to play good for a long period of time, and I think we have the pieces to do that. I've been studying championship clubs for a long time, and I truly believe that there are pieces here to be a very good club."

Girardi was hired following the 2019 season as the replacement for Gabe Kapler — now managing San Francisco — coming in with an overall successful decade managing the Yankees, which included a 910-710 record and the 2009 World Series, on his resume.

But as the Phillies' skipper, the team kept stalling out. In the pandemic-shortened 2020 season, the Phils went 28-32, missing the expanded playoff field with a historically awful bullpen. In 2021, they showed flashes of a breakthrough but ultimately fell apart down the stretch at 82-80.

This season, for a variety of reasons — both on Girardi and not — the Phillies were going nowhere fast.

"I think there are a number of reasons we didn't win," Girardi said. "We gave too many extra outs that probably cost us four or five games maybe? Maybe even more. I think at times our bullpen struggled. We had some guys that I think have much better stuff than the potential that they've pitched to, which led to some games...

"And I think some guys got off to some slow starts offensively, and that happens, right? But I think you could overcome sometimes one thing, maybe even two, but sometimes when it's more than that I think it's somewhat difficult."