Joe Girardi has high odds of getting fired, sportsbook projects

Girardi's team option wasn't picked up for 2023, and with these October-or-bust Phillies, the pressure's clearly on. 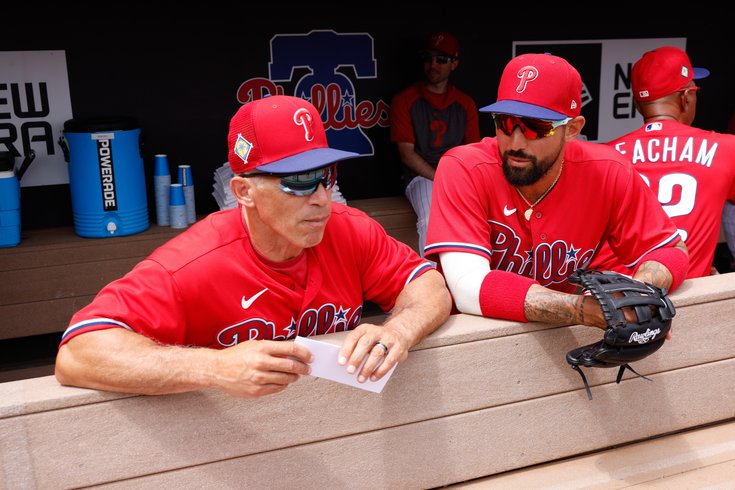 The hot seat doesn't have much patience. Neither do oddsmakers.

Clubs are not even a handful of games into the 2022 major league season, but already offshore sportsbook BetOnline.ag is coming in with odds on the first manager to be fired.

Joe Girardi, leading the October-or-bust Phillies, has the third-highest odds to get canned at 9-1, right behind the Angels' Joe Maddon at 15-2, and the Yankees' Aaron Boone up at the top at 7-1.

Here's a table of the managers who have the highest odds to be fired 1-15:

For Girardi, it's clear that the pressure is on. The Phillies stalled out down the stretch the past two seasons, and coming into spring training, the club opted not to pick up his team option for 2023. Team president Dave Dombrowksi also spent millions, exceeding MLB's luxury tax threshold, to give the Phillies a lineup that, on paper, should get them over the hump.

In nearly every respect, it's now or never.

"It doesn't make my job tougher," Girardi said last month down in Clearwater (via ESPN and AP). "I'm going to do the same job no matter what. I've never been extended in a season before so it's something I'm used to. You play it out. Just like players, managers have to perform. It's a production-based business so you have to perform."

Like Girardi, Boone and Maddon also came into 2022 with high expectations.

Boone is at the helm of a talented Yankees squad that, despite making the postseason, underwhelmed in 2021 and was quickly dispatched of by Boston in the AL Wild Card game.

And Maddon, who saw years of success in Tampa Bay and then a World Series title with the Cubs in 2016, is now managing a team with two generational players in Mike Trout and Shohei Ohtani. The Angels can't afford to waste talent that great.

For the Phillies, 2022 isn't off to a bad start. They slugged their way to an Opening Day victory over the Athletics after a solid Aaron Nola start went south, then homered three times while Kyle Gibson struck out 10 on Saturday before finally running into some trouble in the series finale on Sunday.

A three-game series against the Mets is up next — Ranger Suárez gets the nod against New York's Taijuan Walker to start Monday night — and the Phillies will likely be battling them for the top of the NL East all summer.