Bryce Harper, Aaron Nola, and the Phillies are set on ending a decade-long postseason drought 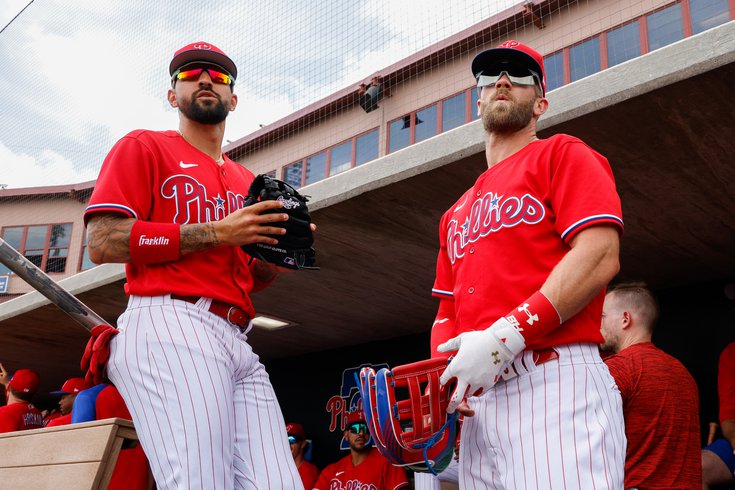 It's playoffs or bust for Nick Castellanos, Bryce Harper, and the Phillies.

After a draining lockout that brought an expanded playoff field and an NL DH, then a spring training full of big signings, big surprises, and even bigger swings, Opening Day is here.

The Phillies begin a critical 2022 campaign this afternoon at Citizens Bank Park against the Oakland A's, heading in as one of the most interesting teams in baseball.

Their goal is clear. How they've been built to achieve it is too: Land their way to the franchise's first postseason appearance in a decade.

There's more to it though. There always is with a 162-game schedule.

The Phillies have questions surrounding their pitching, their fielding, and whether this offense-heavy strategy the front office is taking will even work.

We won't get to every storyline surrounding this team today, but here are 10 to keep in mind heading into the new season. Let's start with the biggest of them all...

The Phillies want October baseball and are sparing no expense to get it. Team president Dave Dombrowski was cleared to exceed the luxury tax threshold and invested in two of the offseason's biggest free agents to get them there.

Kyle Schwarber is here on a four-year, $79-million deal, bringing his unorthodox, but effective, leadoff bat to the lineup and years' worth of postseason wisdom.

Nick Castellanos is here too, on a five-year, $100 million contract, putting even more power into the heart of the lineup and hoping he'll be a crucial part of a playoff run.

If the front office kept going, they might have even walked away with Kris Bryant too — he chose Colorado in the end — Bryce Harper was campaigning for it, he campaigned for all three so that the Phillies would have their best shot.

The Phillies are entering 2022 with a borderline videogame batting order, and with manager Joe Girardi possibly in the last year of his contract, it feels like now or never. 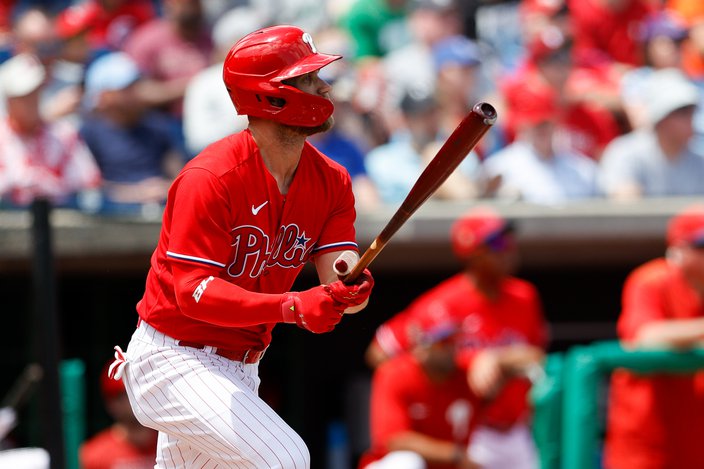 He did it quietly for the longest time too, missing out on an All-Star appearance midsummer before everyone realized he was raking.

Harper walked away with his second NL MVP honor in the end. But can he do it again, becoming the first back-to-back MVP since Miguel Cabrera? With a stacked lineup that will force pitchers to throw to him, he very well could.

Our own Shamus Clancy likes his chances.

Harper hit 35 home runs in 2021, Schwarber hit 32 between Washington and Boston, Castellanos hit 34 for Cincinnati. Add Rhys Hoskins' 27 from last year, and even J.T. Realmuto's 17 and Jean Segura's 14. And if he can carry his performance over from the spring, when he gets back that is, Mickey Moniak might launch his fair share of baseballs over CBP's right-field fence too.

The 2022 Phillies are projected to have power. Tons of it. And that lineup should, at the very least, be fun to watch. 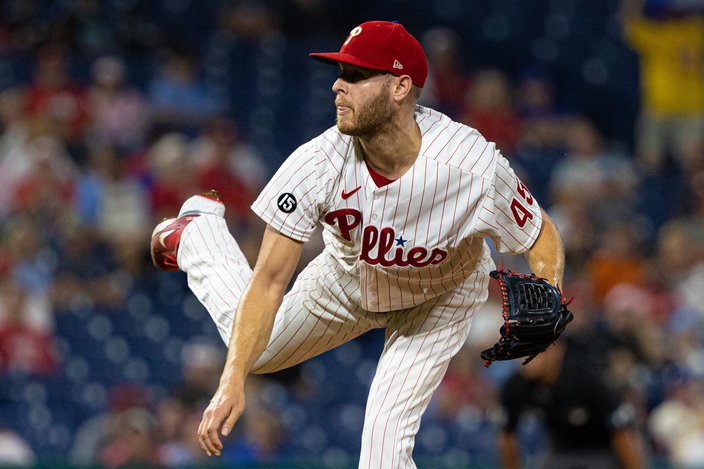 Zack Wheeler finished second in NL Cy Young voting last season and a repeat performance from the 31-year old righthander will be key to the Phils' postseason hopes.

Wheeler was a workhorse in 2021, pitching a major league leading 213.1 innings with 247 strikeouts and a 7.8 WAR, both the second most in baseball.

He came into spring training a bit behind schedule but should be good to go for an April 12 start against the Mets.

When Wheeler's on the mound, the Phillies are probably going to win, and they need their other top starter to give them the same chances.

Aaron Nola will start his fifth straight Opening Day, but is doing so off a down year where he went 9-9 with a 4.63 ERA. For every great start he had in 2021, there would be two more where he just never looked right.

This spring has looked promising though. While his stats aren't impressive at face value (0-1, 5.65 ERA, six home runs in four starts and 14.1 innings pitched), his command has looked great. This was most evident in his last spring start against Detroit, where he struck out nine in 5.1 innings.

If Nola can get back to where he was prior to 2021, the Phillies will be in good shape with a fearsome 1-2 punch at the top of the rotation.

Welcome to the Show, kid. pic.twitter.com/D9VcUtfXBK

The Phillies' top prospect left the big league club with no other choice, he played so well that he had to be on the Opening Day roster. Stott hit .406 with a 1.076 OPS and six runs scored in 32 spring at-bats, and flashed a reliable glove at shortstop, second base, and third base that the Phillies sorely need.

What does it mean for Alec Bohm? We'll get to that shortly. How about Didi Gregorius? Unclear.

With 23 games in 24 days to start the season, the Phillies believe they can find Stott enough at-bats, especially given his infield flexibility.

But the plan long-term, that might still have to be figured out.

So is Mickey Moniak

So this one has to be qualified first with a huge heartbreaker. On Thursday, reports came out that Moniak, after getting hit by a pitch in Wednesday's on-deck game at Tampa Bay, has a fracture in his right hand and will miss at least six weeks.

Like Stott, Moniak played so well in the spring that he left the Phillies with no choice. He had to be on the big league club. He even had the nod for Friday's start in center field.

The 23-year old outfielder, who had long struggled to get established within the Phillies' farm system, appeared to have turned a serious corner this spring, offering hope at a center field position that had little stability coming into 2022.

You just have to hope that what Moniak had going for himself picks back up when he comes back, because he definitely earned this big-league shot.

Alec Bohm is entering just his second full season as a regular major leaguer and came into spring training with an inside track on retaining the starting job at third base. But his struggles in 2021 got so bad that he was demoted to the minors for a month to reset his game and he hasn't played so hot this spring either, hitting just .222 with a .615 OPS.

At 25, Bohm is still relatively young, but this might be a make-or-break year for him, especially since Stott has taken reps at third and shown he can handle things at the hot corner.

What about the bullpen? 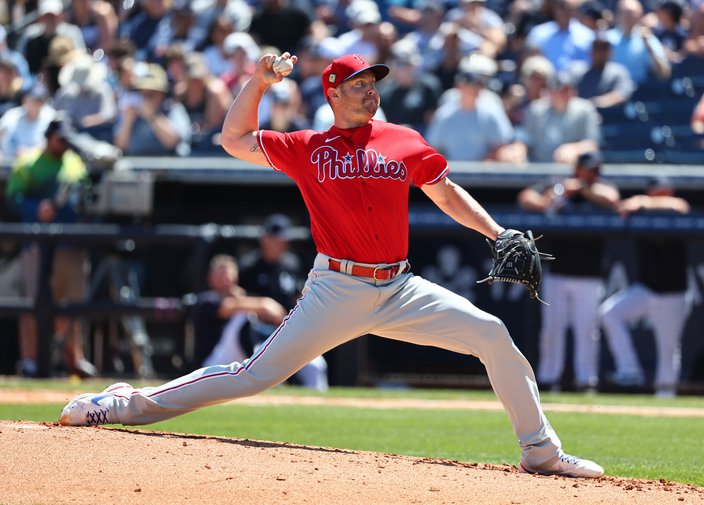 When you step back and look at the Phillies' bullpen the past two years, "bad" is an understatement. If the relievers were even a semi-decent group in 2021, chances are we're writing about how this team follows up last season's playoff appearance.

But here we are, still looking for that first trip to the postseason since 2011. The Phillies' hope seems to be that their starters can regularly go deep into games and that new arms Corey Knebel, Brad Hand, and Jeurys Familia can combine with the returning relievers to close out whatever innings might be left. Of course, all while the offense scores tons of runs.

What about the rest of the division?

Okay, so the Nationals are in a rebuild, but there's still Juan Soto to worry about. The Marlins probably won't be ready to make a serious run at the division for a while.

But the Braves are coming back as the defending champs, and minus Freddie Freeman's departure, aren't that much worse for wear. They might even be better. Atlanta acquired All-Star first baseman Matt Olson from the Athletics last month and they're hoping to have star outfielder Ronald Acuña Jr. back in May.

The Phillies loaded up, but Atlanta's no slouch. The Mets might not be either.

The NL East is going to be a fight.