The 2022 Phillies are really a team full of designated hitters 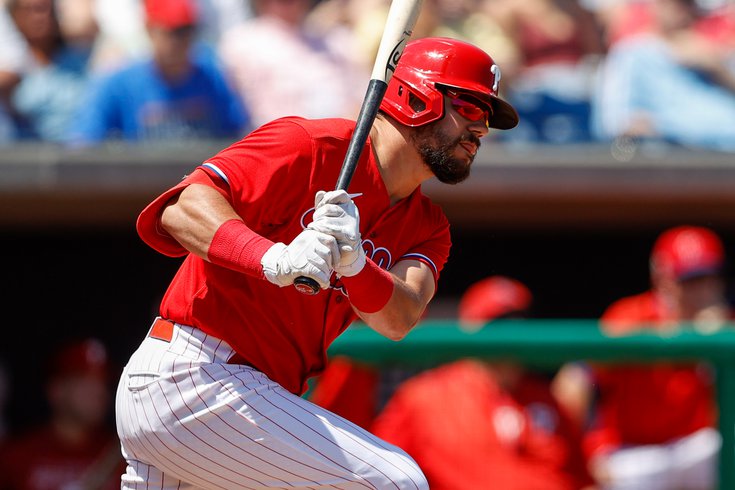 Kyle Schwarber is one of many DH-playable hitter on the Phillies this season.

Read More
Spring training is finally in full swing as the Phillies are clearly going to be giving it their best shot to end their now 10-year postseason drought after exceeding baseball's luxury tax for the first time ever. That kind of "stupid money" brings with it high expectations.
For what it's worth, the Phillies are +100 to make the expanded playoff field this fall (via bet online.ag) and their over/under win total is 84.5 (via Caesars).
Before the team hits the field in South Philly to open their 2022 campaign against the Athletics on Friday, April 8, we're going to take a deep dive into each positional group.
Today, we're looking at the designated hitter spot...

The National League will have a designated hitter from now on. And while it is jarring to some baseball purists, it's the way forward and will positively impact the Phillies — particularly the 2022 Phillies.

Without giving too much mind to defense when Dave Dombrowski and the rest of the Phillies front office put together this baseball team, there are at least five guys on this roster who could be full-time designated hitters.

Manager Joe Girardi will have lineup flexibility all season long, and the ability to give someone a day off in the field without losing their bat. The following players will almost certainly be playing the DH at some point this season as they have understudies likely to be on the 26-man roster:

• J.T. Realmuto (17 career DH starts) can be spelled behind the plate by whomever the backup catcher is.

• Rhys Hoskins (8 career DH starts) can be spelled at first base by Alec Bohm or Realmuto.

• Didi Gregorius (2 career DH starts) can be spelled by Bryson Stott if he makes the team, or by whichever utility man they carry.

• Alec Bohm (1 career DH start), if he makes the team, can be spelled at third base by Johan Carmago or Castellanos.

• Kyle Schwarber (44 career DH starts) looks likely to be the most regular DH, but will split time with Castellanos in left field.

• Nick Castellanos (42 career DH starts) will get chances at DH when he is not playing left field.

With the DH having only existed in the National League once before — the shortened 2020 season — and with the Phillies' new additions in Schwarber and Castellanos hailing from NL teams, no one on the team has a ton of DH experience. You can expect to see a varied look at the position throughout the season, with a ton of different lineups and batting orders.

With the DH mostly new to the National League, the division's other teams are likely to take some different approaches. Here's a brief overview of the projected starter at each of the other team's designated hitter spots:

The Mets will likely put a variety of different players at DH, but Cano — 38 — could get the first crack at it. He'll also play some first base.

Another team with a potential by committee approach, Dickerson is a talented outfielder who has been hurt a lot. He is in line to be the DH when the season kicks off.

At least to start the year, Washington looks to have a full time DH on their roster in 41-year-old, who FanGraphs projects has enough pop in his bat to hit 33 homers this season.

Cooper wields one of Miami's best bats and as of right now it appears he'll get most of his swings as the designated hitter, though the Marlins could mix things up there as well.

The Phillies farm system is awful, but having the DH will give new opportunities to homegrown players. However, with Harper, Realmuto, Castellanos and Schwarber each under contract until at least 2025, it doesn't seem like the team will be in the market for a DH anytime soon.