Phillies 2022 preview: J.T. Realmuto might be the best catcher in baseball 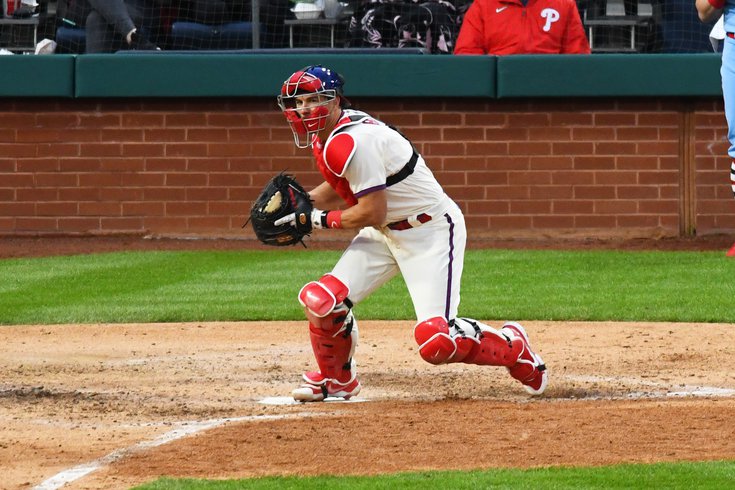 PHILADELPHIA, PA - APRIL 17: J.T. Realmuto #10 of the Philadelphia Phillies attempts to make a double play during the game against the St. Louis Cardinals on April 17, 2021 at Citizens Bank Park in Philadelphia.

Let's take a look at catcher to kick things off...

According to MLB Network, Realmuto is the best catcher in all of baseball right now and that's good news for the Phillies, as they will have him for the second year of his five-year, $115.5 million contract in 2022.

Last season, Realmuto had a down year (by his high standards), posting his lowest batting average and slugging percentage since 2015. He was still an All-Star and flashed some of the best defense behind the plate in the entire league. Only five catchers spent more innings behind the plate last year, and Realmuto boasted a .999 fielding percentage in nearly 1,000 innings caught.

While he as a little power, he will probably slot somewhere toward the back half of the batting order with Kyle Schwarber and Nick Castellanos joining Bryce Harper and Rhys Hoskins as sluggers slotting in the middle of the lineup. Having a hitter with the talent Realmuto does hitting somewhere around fifth or sixth in the order could be a recipe for a lot of RBI opportunities for the 30-year-old in 2022. Last season, Realmuto hit .295 with runners in scoring position. Joe Girardi and company would take that again in a heartbeat.

In the rare event Realmuto needs a day off, the backup duties are still up for grabs and two relative unknowns are battling for the role in spring training. Garrett Stubbs and Donny Sands are the two most likely backups, each carrying a modest bat but potential to contribute when called upon. Sands is 25 and has never appeared in the majors. Across a long minor league body of work spanning 12 different teams and six different levels, Sands is a .268 hitter with 26 homers and 183 RBI in 368 games. Garrett Stubbs is 26 and has played in 51 games for the Astros, and he may be the low-risk play at this spot to start the year — though he carries a lighter bat than Sands.

Realmuto is the best catcher in baseball, placing him at the top of the NL East pecking order (projections and WAR courtesy of Baseball Reference).

The division's projected starting catchers include the All-Star Realmuto, three middle-aged veterans who are expected to play essentially at replacement value in Atlanta, New York and Miami, and then Washington's Ruiz who is Baseball America's No. 22 overall prospect heading into the new season. Advantage Philly.

Realmuto will be the starting catcher for at least the next four years, as his contract suggests. Marchan is under team control for a while so that backup gig is his to lose. Catcher is actually one of the few areas of depth and strength within the Phils weak farm system, which is ironic, as the position is blocked for the next half decade.

Four of the team's top 30 prospects play catcher. Rafael Marchan was expected to be the back up battery man and at 23 he has been waiting for his opportunity for a while, blocked by recently departed Andrew Knapp. He has hit .267 is 23 big league games, which is close to his career minor league batting average of .265. However, for whatever reason the team decided last week they'd rather he get regular at bats in the minors for at least another few months.

Logan O' Hoppe is the organization's fifth best prospect and is likely to play in Triple-A this season. He is 22. Behind him is 18-year-old Rickardo Perez, way down in rookie ball but he is still the team's 19th best prospect according to MLB.com. And then in the 29th spot is Donnie Sands, a 25-year-old with some bat skills who is actually in spring training with the big league club. He could be the next man up should there be an injury at the spot during the season.

If the Phillies choose to be buyers at the trade deadline during the summer, they may be able to utilize their catching prospects as a major bargaining chip to bring a missing piece to South Philly.