Phillies 2022 Preview: Do or die for Alec Bohm at third?

Bohm struggled in 2021, but he can still prove himself as the third baseman of the future 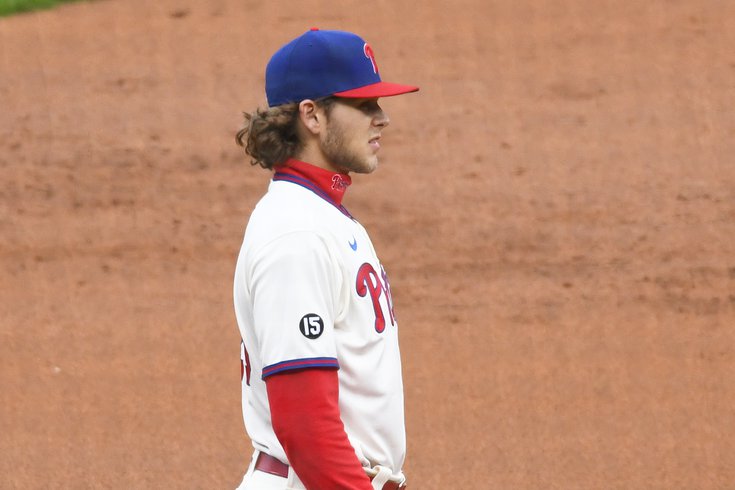 Okay, so as of now, third base is Alec Bohm's job to lose. But this may be a do or die year for the once heralded prospect.

Bohm is entering only his second season as a regular major-leaguer, but with the Phillies full-on into "win now" mode, new signee Nick Castellanos not putting a potential return to third base out of the question, and top prospect Bryson Stott taking reps at the hot corner this spring. The pressure's on.

He committed 15 errors at third last season, and his struggles, both defensively and at the plate, got so bad that he was sent down to triple A Lehigh Valley for a month to reset his game.

BaseballReference has Bohm projected to hit .265 with 10 home runs and .716 OPS this season. He can definitely come into 2022 new and improved, which would be great for both him and the Phillies, but while it doesn't directly correlate to regular season production, Bohm has struggled this spring.

The team isn't without other options though. Again, Castellanos has experience at third base going back to his days in Detroit, Stott's knocking on the door of his big league debut, and Ronald Torreyes and/or Johan Camargo are going to be available off the bench if the club needs a stopgap.

“Obviously we’re hoping that Alec runs with it, and he has a leg up on everyone,” manager Joe Girardi said earlier this spring. “But this is a performance business. I see him making improvements, and we’re happy with what we see in his work, but yeah, it’s something that’s not etched in stone.”

Save for the Braves' Austin Riley, the division's third baseman are a pretty middling group. Granted, Bohm (or Stott) could change the entire dynamic of that with a breakout 2022.

This depends highly on whether Bohm breaks out this season or Stott wins the third base job and takes off from there. If Bohm's great, he buys some time, at least another year or two, as the Phillies' answer at the hot corner. If Stott takes over, it becomes a question of when he moves back to his natural position at shortstop, which may not be long with Didi Gregorius' contract up after this season.

Castellanos could split time between third base and the outfield, but he's 30 and was never the greatest glove to begin with.

The Phillies have just one notable third base prospect in the system, 21-year old Kendall Simmons, but he's a very raw talent whose development has been progressing slowly.