Phillies 2022 preview: Their starting pitching can scare the NL too

The bats are drawing all the attention, but the Phillies' rotation is nothing to scoff at 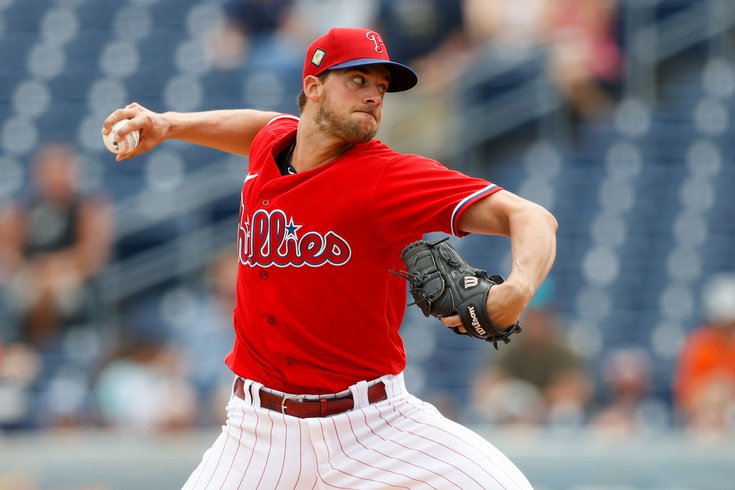 Today, it's the starting rotation...

The Phillies spent the shortened free agency period assembling a lineup built for the sole purpose of crushing baseballs, but if all goes well, they could be just as difficult of a team to hit against too. Well, at least as far as starting pitching goes.

Zack Wheeler, Aaron Nola, Kyle Gibson, Ranger Suárez and Zach Eflin are all returning from last season, and if they're all on top of their game, that should be more than enough to help the Phillies finally snap their decade-long postseason drought.

Even though he fell behind schedule this spring due to shoulder soreness, Zack Wheeler said he's healthy and will begin the follow-up to his NL Cy Young runner-up season with an April 12 start against the Mets.

Nola, who will make his fifth-straight Opening Day start, is coming off a down year, and while his overall stats in the spring aren't impressive on a surface level (0-1, 5.65 ERA, 6 HR in four starts and 14.1 innings pitched), he's shown great command over his pitches.

Against the Tigers on Sunday, Nola went 5.1 innings striking out nine and giving up just a solo home run.

Gibson, Suárez, and Eflin are expected to handle the rest of the starts, with each capable of being a solid middle-to-bottom of the rotation starter who can eat up innings and keep things under control. Suárez, especially, had a strong end to 2021 after being brought over from the bullpen and will hopefully continue to trend up. Eflin has also had a good spring (2-0, 0.96 ERA, 11 Ks in three starts and 9.1 innings pitched) after a knee injury shut him down in the middle of last season.

Here's a look at the Phillies' expected rotation by the numbers, with 2022 projections courtesy of BaseballReference:

*Note: Suárez began the 2021 season as a reliever.

The Phillies are running with the exact rotation they finished 2021 with, and on paper, it should be good enough to at least keep them in most games.

Using FanGraphs' 2022 ERA projections and starting rotation power rankings (in parentheses next to team), here's a cursory glance at how each rotation in the NL East stacks up:

Third in the rankings is some high praise for the Phillies' pitching going in, but the defense behind them is a fair concern, especially since the bottom of the rotation relies more on ground balls to get outs.

"Nola and Wheeler are both at the top of their game, and anchor a Phillies rotation with some questions to answer despite their lofty ranking. The main one? Can Gibson, Eflin, and Suárez survive with middling strikeout rates in front of this Philadelphia defense? This isn’t a good situation for pitchers who let the opposing team put the ball in play; four of the team’s starters are meaningfully below average defensively, and J.T. Realmuto can only make up for so much. We still think they’re the fourth-best rotation in baseball – starting with Nola and Wheeler provides a huge tailwind – but there’s plenty of risk here.

Why feature Gibson, who works by inducing grounders and letting the defense work? He was available at last year’s trade deadline and better than the alternatives, and he’s still better than the alternatives this year. The same is true of fellow sinker-baller Eflin. Suárez is a cut above those two, but he gets a lot of outs on the ground. That’s a lot of grounders for an Alec Bohm/Didi Gregorius pairing to handle." [FanGraphs]

The Mets are right behind them in fourth, but their huge caveat is health, and they're already having issues on that front. 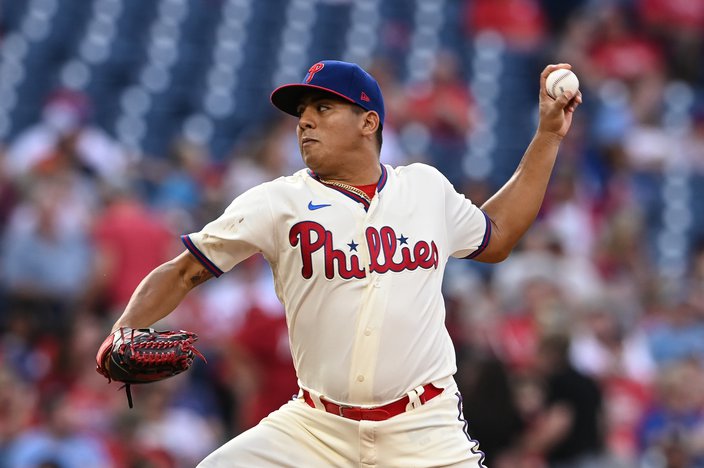 Suárez, 26, is under control until 2025 and eligible for arbitration each year, provided he isn't offered a new contract.

Team president Dave Dombrowksi and general manager Sam Fuld will have some decisions to make on the rotation within the next couple years. How the starters perform this year will factor into those.

They also have to consider who might be coming through the pipeline soon.

Righthanders Mick Abel and Andrew Painter — the Phillies' first-round draft picks in 2020 and 2021, respectively — are the club's No. 2 and No. 3 rated prospects, and are expected to be ready in the next couple of years.

Hans Crouse, a 23-year old righthander who came over with Gibson and reliever Ian Kennedy in the deadline deal with Texas last season, is the sixth-ranked prospect in the system.  He's projected to be major league ready this year, but in his lone spring start against the Yankees on March 21, he immediately surrendered three earned runs and was pulled after just 0.2 of an inning. He was optioned back to minor league camp the next day. Needs a bit more time.

Crouse had a 2.73 ERA in six starts with double-A Reading after the Texas trade last summer, then closed out 2021 with two starts for the Phillies. He went 0-2, throwing seven innings and allowing four earned runs pitching against the Pirates and Marlins.