With 13 games in 13 days to start, the Phillies believe they can find enough at-bats for both 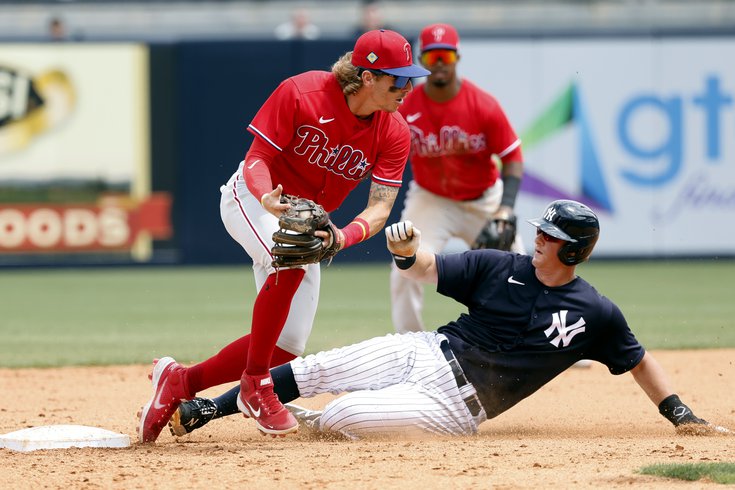 Phillies infielder Bryson Stott making a play against the Yankees during spring training.

Bryson Stott made the team.

The Phillies have told both Stott and Alec Bohm that they have made the Opening Day roster, per multiple reports, though a spot on the 40-man roster will need to be cleared for Stott.

The #Phillies believe they can find enough plate appearances for both Stott and Bohm, especially early with the team opening with 13 consecutive games and 23 in first 24 days. But that position could change with time, of course.

The top prospect in the Phillies' system, Stott has been on a tear this spring, making it so the big league club had no choice but to bring him up. Going into Tuesday's exhibition against Pittsburgh, Stott was hitting .429 with a homer, two doubles, six walks, a staggering 1.136 OPS, and five runs scored.

The 24-year old, who was the Phillies' first-round pick (14th overall) in the 2019 amateur draft, is a natural shortstop, but has taken reps at third base this spring and started Tuesday's game at second base. He's flashed a glove that the Phillies sorely need at all three spots.

After his struggles last season resulted in a month-long minor league demotion in an attempt to reset his game, Bohm has hit just .219 with a home run and a .630 OPS down in Florida ahead of Tuesday's game.

Manager Joe Girardi said earlier in the spring that Bohm had the leg up on the starting job at third base, but that performance would ultimately dictate what happens.

“Obviously we’re hoping that Alec runs with it, and he has a leg up on everyone,” he said. “But this is a performance business. I see him making improvements, and we’re happy with what we see in his work, but yeah, it’s something that’s not etched in stone.”

The Phillies will play 13 games in 13 days to start the 2022 season, which begins Friday against Oakland at Citizens Bank Park. They'll have just one off day through the campaign's first 24 days.

The club believes they will be able to find enough at bats to split between Stott and Bohm as a result, especially given Stott's flexibility in the infield.

Word of Stott making the team comes a couple days after outfielder Mickey Moniak, the first overall pick in 2016, was informed he will be on the Opening Day roster. Like Stott, Moniak has also had an incredible spring.