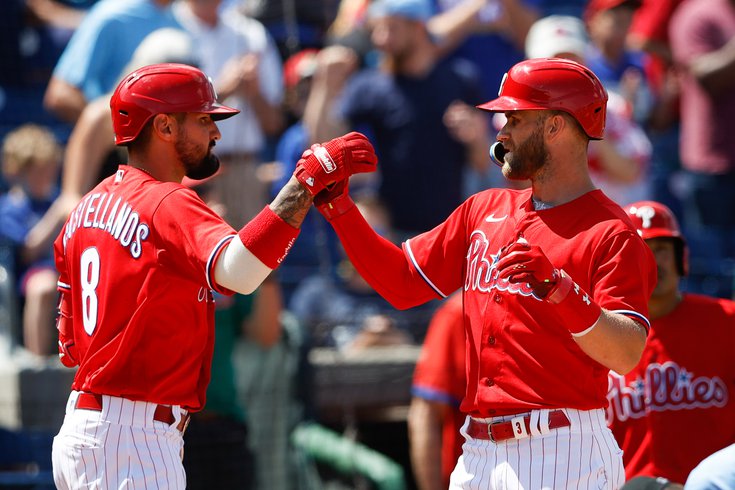 Read More
Spring training is finally in full swing as the Phillies are clearly going to be giving it their best shot to end their now 10-year postseason drought after exceeding baseball's luxury tax for the first time ever. That kind of "stupid money" brings with it high expectations.
For what it's worth, the Phillies are +100 to make the expanded playoff field this fall (via bet online.ag) and their over/under win total is 84.5 (via Caesars).
Before the team hits the field in South Philly to open their 2022 campaign against the Athletics on Friday, April 8, we're going to take a deep dive into each positional group.
Today, we're looking at the outfield...

There is a whole lot of power in the outfield.

Bryce Harper hit 35 home runs last season on his way to winning NL MVP. He'll be back in right field.

Nick Castellanos hit 34 with the Reds in 2021, and will be in left. Unless he's the designated hitter that day, then it'll be Kyle Schwarber, who hit 32 last year with Washington and then Boston.

The Phillies are returning 101 combined home runs to the corner outfield spots between all three, and spent a whole lot of money to do it. And while this group might be defensively questionable, it seems dead set on hitting its way through any problem.

Center field, meanwhile, was initially a search for any kind of stability. When spring training began, Matt Vierling looked to be falling into the starting center fielder job and possibly platoon with Mickey Moniak.

But Moniak has had an incredible spring, finally showing that pop in his bat the Phillies hoped he would develop, and was informed Sunday that he has made the big league club's Opening Day roster. He responded to the news by going out and hitting two more home runs.

Hopefully, this translates into the season.
The 23-year old, who was the first overall pick in the 2016 amateur draft, is batting .310 down in Clearwater with five home runs, nine RBIs, and a head-turning 1.241 OPS.

Odubel Herrera was also brought back on a one-year deal as an extra option, but he won't be available to start the season, and isn't popular among fans due to his domestic violence charge two years ago. But to put the full picture together, we'll include him too.

Here's how the Phillies' outfield is expected to look, using FanGraphs' 2022 performance projections.

So as far as batting goes, the Phillies are stacked in left and right field, but maybe a little weak in center (for now). And the likelihood is they probably won't be winning any Gold Gloves.

How do they stack up with the rest of the division?

Using the projected 2022 lineups and stats from FanGraphs, here's what to expect from the NL East's outfielders:

There's a lot of expected production here, but nothing the Phillies shouldn't be able to compete with, especially when your corner outfielders are both projected to have OPS percentages above .800.

It's important to note that the Braves won't have their star right fielder Ronald Acuna Jr., who tore his ACL in July of last season, back until May. He was hitting .283 with 24 homers and a .990 OPS before he went down, and will be a definite boost for the defending champs when he does return, though he may need time to ease back into things.

As for Washington, they'll have a good group so long as Juan Soto's there. He went on a surge in the second half of 2021, finishing the year batting .313 with 29 home runs, 95 RBIs, an MLB-leading 145 walks, and a .999 OPS. He finished second in NL MVP voting right behind Harper, and entering his fifth season at just 23 years old, will be a concern to the rest of the NL for a long time. 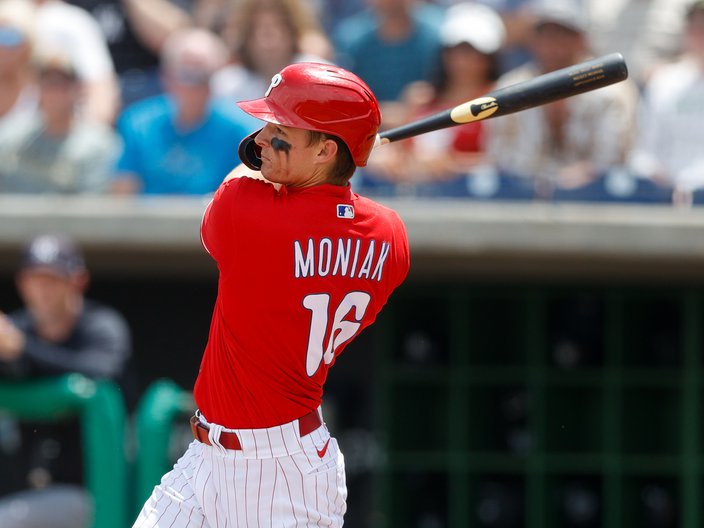 Right field isn't something to worry about any time soon. Harper's entering the fourth year of his massive 13-year, $330 million contract and has plenty of baseball left in him.

The rest of the outfield, well, that's a bit harder to predict.

Castellanos is signed to a five-year deal and Schwarber a four-year contract, and both are presumably expected to either play left field or DH for the duration of their contracts.

Center field? That all depends on how well Vierling or Moniak performs. Vierling, 25, is the 10th-ranked prospect in the Phillies' system right now, and assuming he's the starting center fielder Opening Day, this might be his chance to take permanent hold of it.

But again, Moniak has looked great this spring. If this is finally his breakthrough, then that solves a big problem for the Phillies both immediately and long term.

Looking further into the system, 2018 international signing Johan Rojas blazed right through the Dominican Summer League and rookie ball, and closed out 2021 batting .344 with three home runs, three doubles, and a .982 OPS in 17 games at High-A. The 21-year old has also shown the speed, instincts, and arm strength that project him as a center fielder long-term.

Rojas is the club's fourth-ranked prospect, and with a bit of fine-tuning to his approach at the plate, could arrive in a year or two.

Ethan Wilson was the Phillies' second-round draft pick in 2021 and is the seventh-ranked prospect on the farm. He hit for a lot of contact during his collegiate run at South Alabama and is willing to work counts and draw walks, but he hit .215 with a .656 OPS in his first 30 games with Single-A Clearwater last season.

Jhailyn Ortiz, the 13th-ranked prospect, moved up to Double-A Reading after the 23-year old cleaned up his approach and slugged .521 and 19 home runs in high-A ball.

Jordan Viars, the Phillies' 2021 third-round pick, had an .874 OPS in rookie ball and is listed as a first baseman/outfielder, but he's a few years away at least.

Unfortunately, Wilson, Ortiz, and Viars are all projected to become corner outfielders, which really isn't an area of immediate concern for the Phillies.