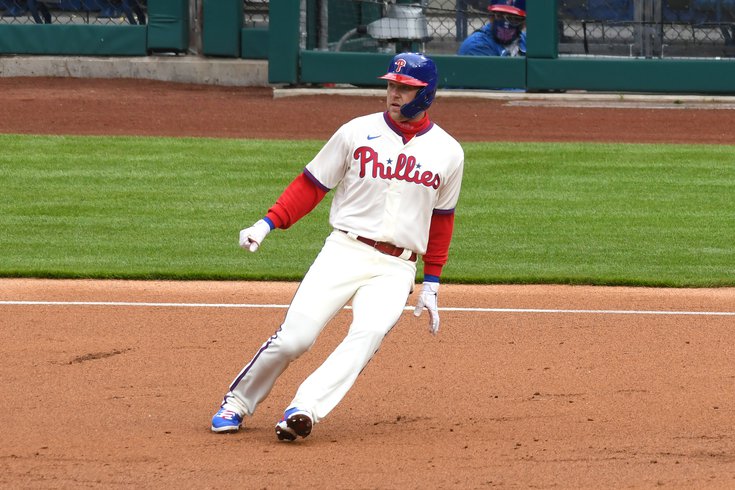 PHILADELPHIA, PA - APRIL 17: Rhys Hoskins #17 of the Philadelphia Phillies stops mid-run between bases during the game against the St. Louis Cardinals on April 17, 2021 at Citizens Bank Park in Philadelphia.

Let's take a look first base...

The Phillies clearly are emphasizing power in 2022 and Rhys Hoskins will be a key part of that. To start, can you tell which of the following players' per 162-game averages is Hoskins, and which is recently acquired DH/OF Kyle Schwarber?

Having trouble picking which is which? Player 2 has played in 35 playoff games and is getting paid $19.25 million. Player 1 has zero postseason experience, and is in his second year of arbitration making $7.7 million.

Hoskins enters 2022 coming off an injury-shortened campaign that saw him hit 27 homers and 71 RBI in 102 games with a career best batting average before he was shut down in late summer due to a torn abdomen. He is fully healthy this spring and appears to have no real competition at first base, aside from occasionally being spelled by J.T. Realmuto or Alec Bohm.

In the past, Hoskins has been the definition of a streaky hitter. His cold spells are hard to watch and when he is hot, he lights up Citizens Bank Park. The cold streaks should be less painful now thanks to the Phillies offseason additions.

As such, it will be interesting to see if Hoskins feels more comfortable, and has less pressure to produce in a lineup that could contain five 30-plus home run hitters. His patient approach will definitely help to wear down pitchers for his teammates, and his slightly below average fielding at first base will be less of a liability with the team able to mash runs at what could be a ferocious rate.

First base is typically a position expected to produce power numbers and the NL East certainly has gotten that from the following players in recent seasons (projections courtesy of Baseball Reference):

Hoskins may very well be toward the bottom of the first base pecking order. Olson was brought in by the Braves to replace Freddie Freeman and he looks poised to come close to doing that. Bell and Alonso are both monster sluggers capable of hitting 30+ homers. And Aguilar is a sturdy hitter for the rebuilding Marlins.

If Hoskins is able to keep pace with the guys he is grouped with above he will have had an excellent offensive season.

Hoskins will remain arbitration eligible following this season, which means he will be under team control for at least one more year after 2022. The first base position is his to lose, and the Phillies are heavily invested in his success — as an arbitration contract (or one negotiated to avoid it) is much lower than market value, as we learned from J.T. Realmuto last year.

A productive Hoskins, playing for less than he's worth will give the Phillies a huge advantage as they navigate their complicated and ballooning payroll for the next few seasons.

The Phillies farm system is not very strong, and there are not too many up and coming prospects challenging for Hoskins' job some day. Jordan Viars is an 18-year-old third round pick from last summer who has great bat skills and plays first base, but he's obviously a ways away from being big league ready. There are no other prospects among the Phils' top 30 (via mlb.com) who play first.