Phillies spring training position battles: Third base, the bench, the bullpen and more 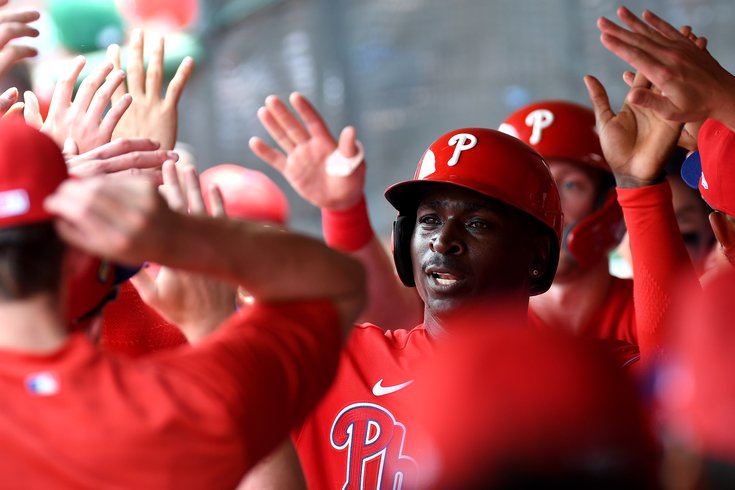 Will Didi Gregorius hold onto his starting shortstop job?

With just two weeks remaining until the Phillies kickoff a much-anticipated 2022 regular season, there are still a few roster spots up for grabs, making for some potentially-compelling exhibition baseball in Clearwater.

Here's a look at the key players in these battles and who currently has the upper hand.

The most intriguing position battle might be one that nobody expected would be at battle at all. After new acquisition Nick Castellanos, a corner outfielder by trade who started his career playing some third base, was seen taking grounders at third earlier this week, it was natural to ask why. Phils manager Joe Girardi both denied that Castellanos was a candidate to play at all at third and that Bohm had to fight to keep his starting third base job.

Girardi, when asked if he sees 3B as open competition: "Yeah. We're hoping that Alec runs w/ it. He has a leg up on everyone but this is a performance business. I see him making improvements, we're happy with what we see in his work, but it's something that's not etched in stone"

NBCSP's Jim Salisbury expanded on that, saying that Bohm could be a trade candidate for the Phils as well. Can Johan Camargo steal the job away from the Phillies former top prospect? We'll have to see if Bohm rises to the occasion over the next week or so.

Inside track: Didi Gregorius | In the running: Bryson Stott

Bryson Stott is currently the Phillies' best position-playing prospect, and having him seize a starting role at shortstop would be a huge boost for the Phillies, who are paying the luxury tax for the first time and will likely break camp with a majority free agent/trade acquisition roster. Stott, 24, had a stellar year in the minors last year and seems ready for the jump to the majors.

The issue there is a $15+ million veteran in Didi Gregorius, who struggled last season and Girardi put on the hot seat, saying he may not be back in 2022. Well, he is back, and the inclusion of the universal DH makes it more likely he stays on the 26-man roster. Stott seems like he will start the year in Triple-A until he has the chance to "Wally Pip" Gregorius and take the shortstop job for good.

Many expected one of the Phils' top prospects, Rafael Marchan, to be the backup catcher, but the Phillies decided he wasn't quite ready, optioning the 23-year-old back to the minors a few days ago. That means that one of two offseason acquisitions, or another top prospect in Logan O'Hoppe, will open the year as J.T. Realmuto's understudy.

Donny Sands is 25 and has never appeared in the majors. Across a long minor league body of work spanning 12 different teams and six different levels, Sands is a .268 hitter with 26 homers and 183 RBI in 368 games. Garrett Stubbs is 26 and has played in 51 games for the Astros, and he may be the low-risk play at this spot to start the year — though he carries a lighter bat than Sands. O'Hoppe is 22 and recently hit .299 in the Arizona Fall League. With Realmuto expected to play 130+ games behind the plate, it would be a waste for O'Hoppe to sit on the bench most nights.

It seems like the first seven pitchers here are locks to make the bullpen. Some are returning vets, like Alvarado and Dominguez, and others have been brought in as mercenaries. There are likely two or three spots up for grabs, with farm hands Damon Jones, Christoper Sanchez and Bailey Falter with the best chances of earning a middle or long reliever role. The battle for the pen could be the most wide open of the positional battles, and if someone absolutely just mows down hitters over the next two weeks, there could be a surprise arm in Citizens Bank Park.

For our purposes here, let's just assume that Bohm starts at third base and that Matt Vierling gets the center field job, with Odubel Herrera on the short-term injured list to start the year. If we don't include the backup catcher, there are probably three roster spots to split between these competitors.

For the infield utility role, the Phillies really like Camargo. Will they pair him with one-time homegrown hero Scott Kingery? Nick Maton has had a good spring and has gotten a lot of at-bats and is likely his main competitor for the role. Both can play infield and outfield.

As far as that fifth outfield role, former first round pick Adam Haseley may have the edge there just based on the investment the team has already made in hm — though you can be sure Williams and Muzziotti will do their best to make a statement that that outfield job should be theirs.