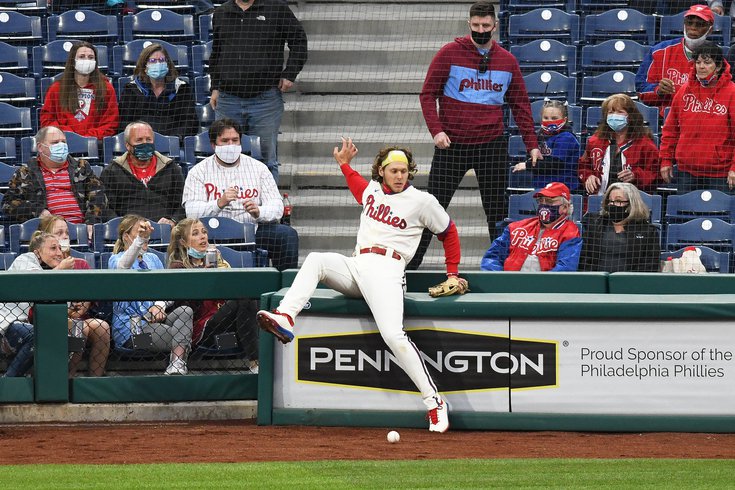 The Phillies are going to be faced with some pretty tough roster decisions when spring training breaks in two weeks and the team heads north to start the regular season.

In addition to rounding out its bullpen and picking who will serve as J.T. Realmuto's backup catcher, the team is going to need to figure out how to make the numbers work when selecting the other three or four bench players for the active roster.

The battle for utility man is fierce, with Scott Kingery, Nick Maton, Johan Camargo and Ronald Torreyes all in competition for a spot on the bench. Add to that shortstop prospect Bryson Stott and the fact that the team is likely to carry an extra outfielder, and you can see things getting pretty tight.

However there is an unexpected name who could also be fighting for a job, according to NBC Sports Philadelphia's Jim Salisbury: former first round pick Alec Bohm.

In the wake of Nick Castellanos' signing, the Phils are making sure they have enough at-bats to go around for their star players. And that could come at the expense of the one-time top player in the Phillies' entire farm system.

Girardi said there are "no plans" to play Castellanos at third. He is expected to get some time in left field, some time in right field (when Bryce Harper is the DH) and some time at DH.

Nonetheless, Castellanos' work at third base is interesting because that position still seems unsettled 16 days before Opening Day. Alec Bohm does not appear to have the job locked down. In fact, there is credible buzz that he could be used in a trade. Newcomer Johan Camargo has plenty of big-league experience at the position and has swung the bat well so far in camp.

Maybe Castellanos is indeed just taking balls at third for the exercise of it all.

But maybe he's being evaluated as a depth piece at an unsettled position. [NBCSP]

Girardi sort of confirmed the third base situation when he talked to the media Thursday morning:

Girardi, when asked if he sees 3B as open competition: "Yeah. We're hoping that Alec runs w/ it. He has a leg up on everyone but this is a performance business. I see him making improvements, we're happy with what we see in his work, but it's something that's not etched in stone"

Bohm has hit the ball hard in his short big league career, but that's about all he's done. In 597 career at-bats in the majors, the 25-year-old has just 11 home runs. He also has a career WAR of -1.4, mostly due to his 19 errors at third base. He had the third-most mistakes at the hot corner in all of baseball in 2021.

If he continues to be a defensive liability, and if he isn't able to flash any power in a lineup that is clearly going to need to out-slug opponents in order to win games, there is some logic to him being on the trade block.

The question, then, is what would a Bohm trade yield in return?

As we mentioned just above, there is an abundance of depth when it comes to bats who can contribute. If Bohm could fetch the Phillies a rotation-caliber starter, or an ace reliever, the team might consider pulling the trigger.

Stott has made seven career starts at third base and perhaps could find a quicker path to the majors if he assumes that role. All of the utility men vying for a bench spot, with Camargo mentioned in particular, can play third. And Castellanos is clearly practicing there for a reason.

It's unclear whether this rumor has legs, or if Bohm will be able to earn back the starting gig at third that was his last season. But what is clear is that the Phillies are not willing to mess around. They're going to be paying for the privilege of spending "stupid money" in a luxury tax levied for the first time in team history. Third base will be a very interesting situation to keep an eye on as the 2022 season approaches.