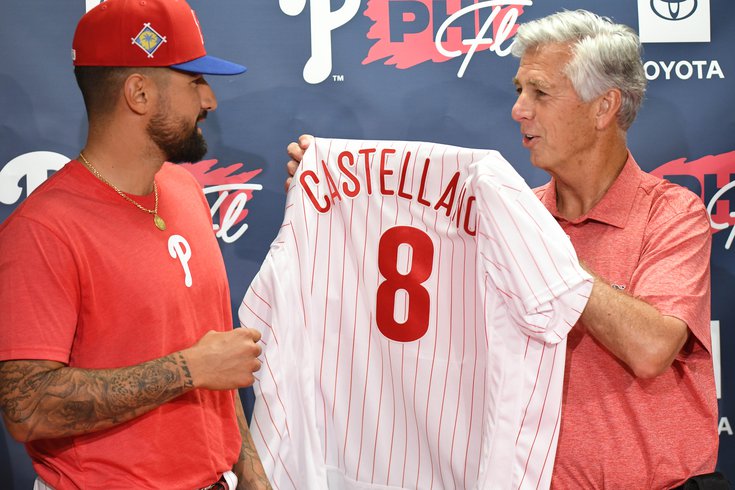 The 30-year old outfielder, signed to the Phillies on a five-year, $100 million contract,  had his introductory press conference on Wednesday down in Clearwater, where he put on his No. 8 jersey for the first time.

The Phillies' postseason aspirations are clear. They're spending a combined $179 million between Castellanos and fellow slugger Kyle Schwarber (four-year, $79 million deal), exceeding this year's $230 million luxury tax threshold to assemble a lineup that, on paper, should hit its way to October.

"I've played over a thousand big league games and have zero playoffs wins," he said. "So cool. I've made money, I've hit homers, I've played on TV. But I haven't won no games that matter."

Yeah, his mission is pretty clear too.

Manager Joe Girardi said the club's plans are to slot Castellanos in at either left field, right field, or DH. But of course the batting order and positions will vary depending on the opponent.

"That's up to these guys," Castellanos said. "But whatever the team needs. I have a Phillies hat on, so whatever..I don't know how good of a pitcher I'll be, but whatever they need."

Castellanos originally came into the majors as a third baseman, but converted into a full-time outfielder toward the end of his run in Detroit.

He was asked if the idea of playing at third was completely in the past. Again, he was blunt: "No."

"He still likes to take ground balls," Girardi said. "That's part of his routine, his everyday routine, so my eyes will be open when he's there.

"I once played Vernon Wells at third base because I saw him take ground balls on days he didn't play, and I had to put him there in the ninth inning, and it worked."

Dave Dombrowski, the Phillies' president of baseball operations, has history with Castellanos. While running the Tigers, Dombrowski's front office scouted and then drafted him in 2010.

Dombrowski recalled the Tigers having Castellanos ranked as one of the top prospects on their board, in the same year current Padres star Manny Machado was drafted third overall by Baltimore.

He wasn't Machado, Dombrowski said Wednesday. "But this guy can hit with anybody," and being around hitters like Miguel Cabrera while in Detroit only helped him get better.

"He's a difference maker," Dombrowski added. "He GRINDS his at bats...He's a great offensive player. But in addition to that, he's a winner. So the type of attitude and approach to get your uniform dirty...just go ahead and get it done is what I know he brings to the clubhouse and why I think [the signing] was so important for us."

Castellanos' view of it: "Best way to describe it is survival. I have a family. I don't have a college degree. I hit baseballs."

Can you tell he's going to be a quote machine?

Dombrowski knew Castellanos would be a good fit in the middle of the lineup, and got the okay from owner John Middleton and the Buck family to get a deal done, even after the Schwarber signing.

"Great pitching shuts down anybody most of the time," Dombrowski said. "But you have a chance to score a lot of runs with that lineup."

First look in the pinstripes pic.twitter.com/XPtqa1mHk7

Unsurprisingly, Harper was involved and making a push behind the scenes too.

"Bryce also played a part in getting this deal done," Castellanos said.

"I want to thank John Middleton for signing Nick," agent Scott Boras, who represents Harper and Castellanos, said at the press conference. "Now I don't get four phone calls a day for the last month from Bryce Harper."

All the negotiating is done and out of the way now. The focus shifts to the field with the remainder of spring training and then Opening Day on April 8.

How much better are Castellanos and the Phillies going to be?