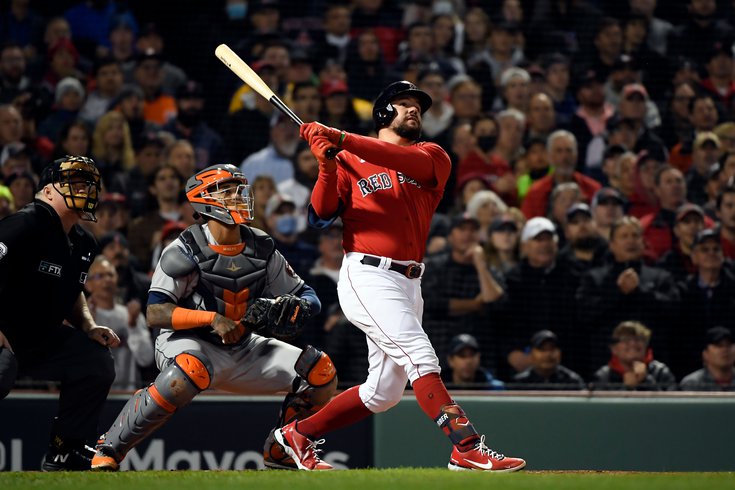 Perhaps unsurprisingly for a franchise that hasn't made the postseason in 11 years, the Phillies have been short on "winning" players as of late. This isn't a gripe about the team's intestinal fortitude or some other boomer take, but a simple fact that the Phillies don't have guys who have a ton of experience playing baseball on the biggest of stages and bringing home the hardware.

Enter Kyle Schwarber. The 2021 All-Star comes to Philadelphia with 128 playoff plate appearances in his career. The other eight projected regulars in the Phillies lineup have a total of 228. "Schwarbs" is the lone player of those nine to have a ring, which he received after hitting .412 in the 2016 World Series with the Cubs.

Schwarber, manager Joe Girardi and president of baseball operations Dave Dombrowski spoke to the media from Clearwater on Monday morning. The consensus was that not only does Schwarber bring the power to have the bell ringing in Citizens Bank Park all summer, but the background to establish a winning culture in the Phils' clubhouse.

"We think the world of Kyle's ability and makeup," Dombrowski said. Schwarber mashes the cover off the ball and has that oh-so-coveted World Series championship to his name. Dombrowski wanted to add a player with "championship experience" to the team with the longest playoff drought in the National League and he got it in Schwarber.

"I'm in the business of winning baseball games. We're built to win the East." Schwarber added. "I've only won in my career... It's an addicting feeling.

"I'm excited to bring a World Series back to Philly."

Schwarber is right. His teams have made the playoffs in six of his seven big league seasons. Those teams with Schwarber advanced at least one round in four of those six postseason trips. His career playoff OPS of .878 is even higher than his regular season OPS of .836.

Girardi, entering his third year as the Phillies' skipper, knows that feeling well. He won three championships as a player and one as a manger with the Yankees. "You're addicted to it," Girardi said of reaching the World Series and the grind to get back there.

The Phillies have become accustomed to a series of meltdowns during Girardi's tenure with the organization. More should be expected from a manger of his pedigree, but there's also something to be said for players who've never gotten over the hump that all baseball players dream of. The team's new slugger has done it. If a Red October finally comes back to Philly, Schwarber's bat and his winning profile will be a huge reason why.