The Phillies bringing back Odubel Herrera is a tone-deaf move 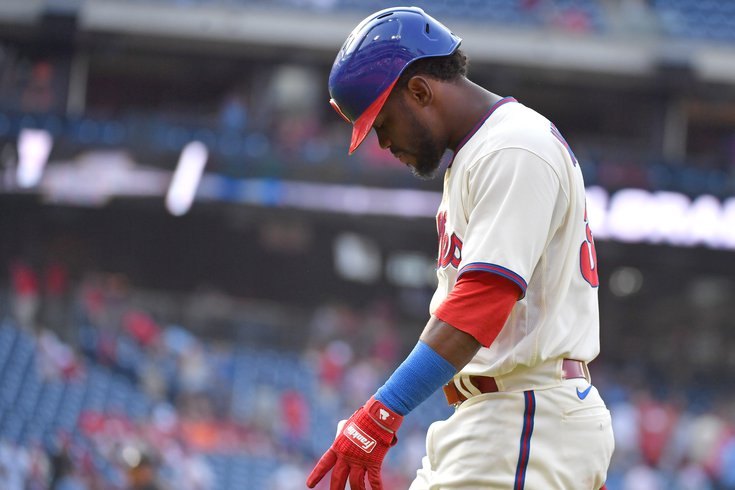 The Phillies are signaling that they don't understand their fans by bringing back Odubel Herrera.

John Middleton, are you listening?

The internet certainly isn't the "real world," but if the online reaction to the Phillies giving Odubel Herrera yet another season in red pinstripes is even slightly representative of the masses, the Phils are going about this all wrong.

In May 2019, Herrera was arrested for a domestic violence incident in Atlantic City and charged with simple assault. The victim, Herrera's girlfriend, later dropped the charges, but the damage was already done both in terms of Herrera's disgusting behavior and his public standing among Phillies fans.

Herrera went on administrative leave and was suspended for the remainder of the 2019 season, missing 85 games for violating Major League Baseball's Joint Domestic Violence, Sexual Assault and Child Abuse Policy.

News trickled out Sunday that the Phillies were interested in bringing back Herrera. The response on Twitter? Not great to say the least. MLB.com's Todd Zolecki reported on Monday morning that the team and Herrera have come to an agreement on a big league deal:

Source says the #Phillies and Odubel Herrera have reached an agreement on a big league contract as @MattGelb reported earlier this morning. Dave Dombrowski dropped some big hints yesterday about a platoon setup in CF with Matt Vierling.

What is the Phillies' ownership doing?

Fans don't want to root for bad people. It's a fairly simple concept. For a team that has been relegated to a bottom-feeder in the larger Philly sports spectrum amidst the longest playoff drought in the National League, they could use as much goodwill as possible. The team hasn't had a winning season since I was a senior in high school. The Phils are now an afterthought after their half-decade Golden Era and only falling deeper into the background of people's minds in age where there's an overload of entertainment options.

The organization's saving grace to Philly fans is that heading to the ballpark is a classic spring and summer tradition. Bring your friends or family, throw on your maroon Phillies cap, grab a cold beer, soak up the sun and transport yourself to a bygone world where baseball is king. The vibes of heading to Citizens Bank Park are immaculate. What happens to those vibes when the guy hitting leadoff is a dude who feels icky to root for?

"Hey, kids, want to head to CBP and sit behind the outfield to watch a guy who did a reprehensible act?" said no parent in the Delaware Valley ever.

Winning is always seen as a cure-all, sure. I would loathe covering a player like Deshaun Watson on the Eagles and don't believe he should be playing in the NFL, but the argument for pro-Watson people is that he's one of the most talented quarterbacks on the planet. Herrera? He's a 30-year-old, below-average outfielder who hasn't had an on-base percentage over .310 since 2017 and is prone to an endless slew of defensive and base-running errors.

If anything, dedicating money and offseason resources to Herrera makes the team actively worse with a plethora of better options on the market if Middleton is ready to pony up and pay that luxury tax bill.

Baseball is on the ropes in the aftermath of a winter lockout. The Phillies have been on the ropes in Philly ever since Ryan Howard's horrific Achilles injury in October 2011. An offseason that could propel the Phillies back to playoff contention with some splashy moves was right there for the taking. That lockout has been over for less than a week and the franchise is doing everything in their power to wash away the excitement that brings.

Major League Baseball is back, but the Phillies are killing the positive energy that should be radiating in the lead-up to Opening Day.