Whose stock is up, and whose is down in Phillies' spring training? 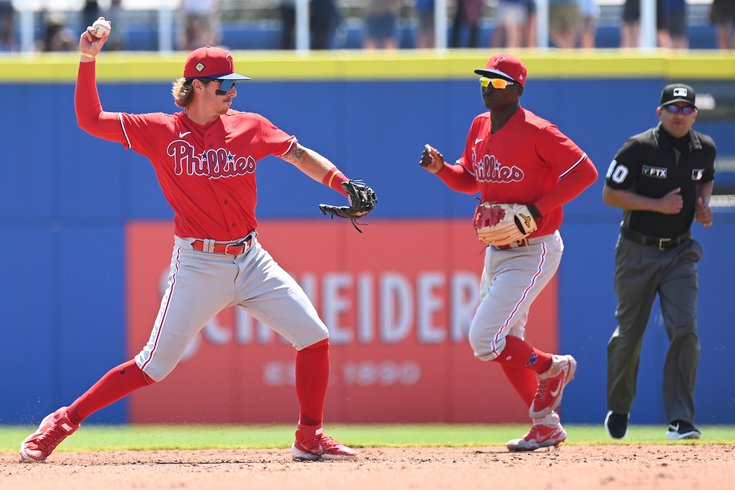 Could Bryson Stott find himself starting at third base alongside Didi Gregorius at short?

As we documented last week, there are a ton of roster spots up for grabs in spring training right now as the Phillies try and hone their roster to a select 28 (and later 26) when camp breaks and the games that matter begin in South Philly.

If you have been unable to tune into spring training during this immensely busy sports stretch, you would be forgiven. March Madness, the NFL offseason, the star-studded Sixers and a ton of other relevant things have been happening day after day, putting the Phillies and their meaningless spring games on the back burner.

So who has been turning heads so far in Clearwater? We are not going to waste time on players like Bryce Harper or Aaron Nola, who are going to be starting on Opening Day no matter what. Instead, our stock up/stock down report below will focus on fringe roster players who may make a surprise leap to the big leagues for the April 8 season opener.

Notice that there are a lot more guys playing well in spring than struggling, making things even tougher for Joe Girardi and his staff to decide who to carry with them:

As of right now, it appears Vierling has an inside track at the starting centerfield job — or at worst a platoon with a left-handed hitter to open the year. The 25-year-old leads all hitters so far this spring in at bats and in RBI, so he is clearly getting a lot of opportunities and making good on many of them. He is hitting .294 so far.

With Odubel Herrera hurt to start the season, Moniak and Adam Haseley appear to be battling to be that lefty centerfielder who could platoon with Vierling. Moniak is only hitting .235 but he is finally flashing the power that got him draft No. 1 overall. He has three homers in his last two games and with the roster as currently constructed, power appears to be a very valuable commodity.

Any worry that Gregorius would sit on the roster as a $15 million bench piece is, for now, on the back burner. The veteran has started the spring with a red hot bat. He is hitting .313 with a pair of homers and looks like he will be the opening day shortstop after a down 2021 threatened his future with the team.

So what does that mean for Stott, the Phillies' top position playing prospect heading into the year? Well, it looks as though he will either be sent to Triple-A to start the year, or he could unseat struggling Alec Bohm (more on that later) at third base. Stott is being given reps at the hot corner and you never know — he could find himself a new position and a job with the big league club if his hot hitting (.417 through six games) continues.

Camargo is another guy vying for that third base job and he could wind up starting there on Opening Day if his consistent hitting (.333 through seven games) continues. He seems a lock to be an MLB utility man at the very worst.

There has not been a more impressive reliever this spring than Nelson, who has eight strikeouts, no walks and a 1.80 ERA through five innings. With a little wiggle room in the bullpen available to an arm that jumps out this spring, a few more solid outings could earn the former Yankee a job come April 8.

Falter is a homegrown former starter who could be the Phillies' choice of long reliever when spring training ends. He's been pitching well so far, posting a 2.25 ERA through his first four innings.

Speaking of homegrown, Sanchez is another Phillies-developed farm hand impressing right now. He's tossed three scoreless innings with a single hit and walk to his ledger.

The former first rounder continues to struggle, and he'll need a surge in the latter half of spring training to earn that final outfield spot. He is just 2-for-16 in the early going.

Bohm has one of the Phillies' only errors in the field so far this spring, but that could be overlooked if he was hitting well — which he is not. Bohm is hitting just .125 through six games, and has been shuffled around between third, first and DH. His fate is unknown and there may not be a player for whom the remainder of spring training is more important.

Bedrosian has also allowed four runs and seven hits in his four innings, and his fate looks to be one heading back to the minors.