5 predictions ahead of the Phillies' Opening Day 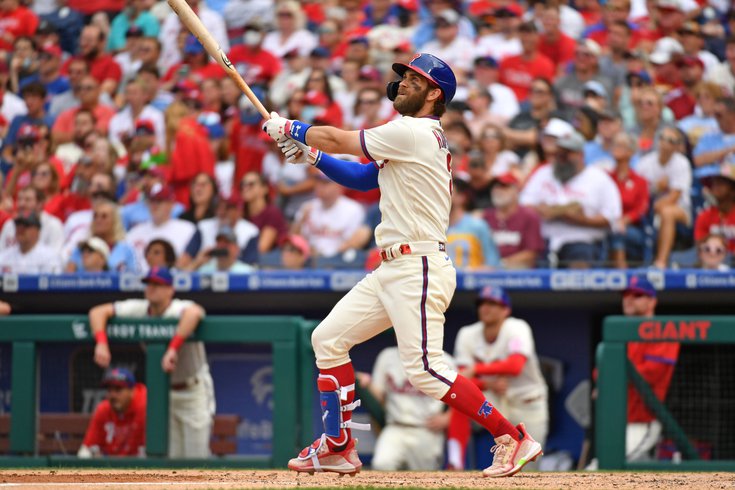 Bryce Harper watches his home run soar over the fence.

It may be rainy in Philly, but spring is here and the Phillies are set to return to the diamond at Citizens Bank Park. There's a buzz around the Phils that hasn't been felt in about a decade. Bryce Harper is coming off an MVP season. The team added two absolute mashers in Kyle Schwarber and Nick Castellanos in free agency. The duo is sure to become quick fan favorites. Infielder Bryson Stott is getting some hype for National League Rookie of the Year. Zack Wheeler is trying to bring home the hardware after finishing second in Cy Young voting in 2021.

As Phillies legend Roy Halladay once said, "It's only gonna get funner."

I have baseball on my brain and might not sleep ahead of attending Opening Day on Friday. Let me roll off a few takes and predictions before the season fully gets underway:

No MLB player has won back-to-back MVP awards since Miguel Cabrera in 2012 and 2013. For the National League specifically, you'd have to go back to Albert Pujols in 2008 and 2009.

It comes down to narrative.

Harper was single handedly carrying the Phillies to respectability with a lackluster roster around him last year. He led the National League in doubles, slugging and OPS and had his team in the mix for a playoff spot in an open divisional race. The team would've absolutely stunk without him, giving reason to one of the (many) definitions of "valuable" when it comes to these awards in sports.

I could see a line of thinking where Harper being in a lineup with some other big offensive talents doesn't allow him to stand out as much. I'm going the other way though. With a better team around Harper, the Phillies could conceivably have a win total in the high 80s or low 90s and find themselves in the postseason. The Phils have the longest playoff drought in the entire National League, not having tasted true October baseball since 2011. I was a senior in college then, which makes it feel like three lifetimes ago.

Harper being the catalyst for the Phillies snapping that streak while remaining the senior circuit's premier power hitter and putting up gaudy rate states yet again could leave him as the most deserving candidate for MVP once more. I expect Harper sees more pitches to hit this season too. You can't pitch around Harper when you have Castellanos right there ready to drive a baseball into deep left field.

The Fightins haven't had four players hit more than 30 home runs each in a season since 2009:

In 2021, three players currently on the Phils' roster topped 30 homers: Harper (35) with the Phillies, Castellanos (34) with the Reds and Schwarber (32) with the Nationals and Red Sox. Rhys Hoskins hit 27 in just 101 games played, going down with a season-ending injury in late August. I say he tops that comfortably in 2022. Hoskins last hit 30-plus home runs in a season in 2018 when he went yard 34 times.

Wheeler led the National League in strikeouts in 2021 with 247. That might seem like a big jump, but when looking at it on a game-by-game basis, it's not too, too wild. He would need to average about another 1.5 strikeouts per game or, more simply, start more games.

The time of pitchers consistently throwing 300-plus strikeouts in a season is dwindling with the way today's hurlers are on pitch counts and bullpens are more active than ever. Since 2010, there have been five seasons where a pitcher struck out 300 or more batters. In the franchise's lackluster 140-year history, there have just be three seasons where a Phillies pitcher struck out 300 or more batters. Steve Carlton did it in his all-time great 1972 season. Curt Schilling did it in back-to-back years in 1997 and 1998 where he had 319 and 300 strikeouts, respectively.

My dad has since told me that we were at the game where Schilling recorded his 300th strikeout in 1998 (I would've been four). I'm a little weary to believe him due to his long-time claim that he saw Pearl Jam before they were famous at The Legendary Dobbs on South Street.

Anyway... I have faith in Zack.

I wouldn't have imagined writing this following Alec Bohm's great rookie campaign in 2020. Bohm hit .338 with an on-base percentage of .400 and a slugging percentage of .481 in 44 games (180 plate appearances). He finished second in National League Rookie of the Year voting. He looked to be a key figure for years to come.

Perhaps that small-sample size was misleading. Bohm crashed back down to earth in 2021. Hard. His batting average dropped to .247. His OBP went down to .305 and his slugging percentage fell to a disastrous .342. This was in 115 games (417 plate appearances). He did little to help his standing with the organization this spring, with all of those rate stats being even lower than they were during his sophomore slump.

Stott, though he's progressed through the minors as a shortstop, looks poised to take Bohm's spot at third base on Opening Day. Before Stott's breakout spring, it looked like 28-year-old vet Johan Camargo would even take playing time away from Bohm. It doesn't seem like manager Joe Girardi trusts him.

It would be selling massively low, but I'm anticipating the Phillies to be in the thick of the playoff hunt come the trade deadline in July and for them to be aggressive to end that aforementioned playoff drought. Shipping out Bohm as part of a larger package for pitching help feels destined to happen.

I almost bought a Bohm shirsey at a game in April at Citizens Bank Park last year. Glad I passed on that!

Playoff baseball. In Philadelphia. It's happening. Remember the days of a 1:00 p.m. Eagles home game followed by an 8:30 p.m. Phillies home postseason game? I need it. Philly deserves it. I'll pencil them in for a Wild Card spot rather than winning the division outright (worth noting: the Phillies have never been a Wild Card team). It doesn't matter how you get to the big dance. It just matters that you're the last one out there grooving.