A pitch hit Moniak's right hand during the on-deck game in Tampa, but initial x-rays came back negative 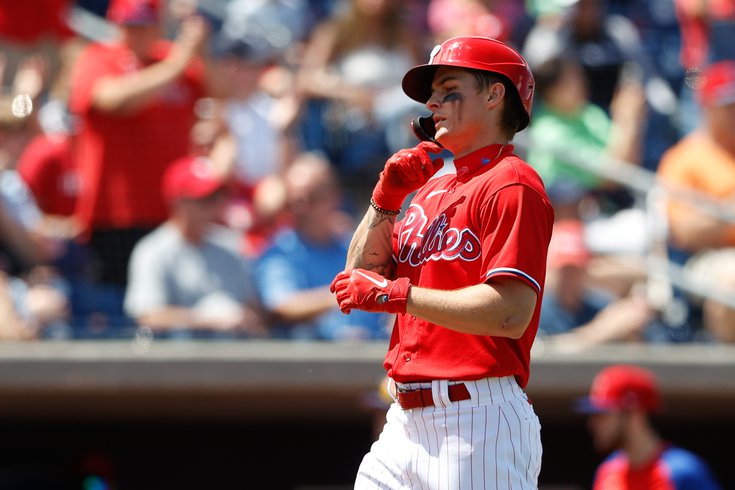 This one's a heartbreaker.

Mickey Moniak, after an impressive spring earned him a spot on the Phillies' Opening Day roster, has a fracture in his right hand.

Moniak will be out six weeks.

Moniak's hand was hit by a pitch in Wednesday's on-deck game against the Rays in Tampa, but initial X-rays came back negative.

The first overall pick in the 2016 amateur draft, Moniak struggled to find his footing through five years in the Phillies' minor-league system. But coming into this spring, the 23-year old looked to have turned a serious corner.

He was told on Sunday that he made the club's Opening Day roster and responded to the news with two home runs against Detroit. In Wednesday's tune-up at Tampa Bay, he hit the third of the Phillies' four home runs through the first two innings.

According to The Athletic's Matt Gelb, Moniak was going to get the Opening Day start in center field Friday against Oakland. That opportunity now goes to Matt Vierling, who was originally projected to be the starter before Moniak went on a tear. The Phillies, who are now in need of a fifth outfielder, are making a last-second call-up of Símon Muzziotti.

Matt Vierling becomes starting CF, but figure the Phillies will have to make a trade to acquire someone else to be a fifth outfielder for now. In the meantime, Muzziotti might be a big leaguer.

Muzziotti finished last season with Triple-A Lehigh Valley. He's been praised for his glove, but has played little in the past two years, first because of the pandemic minor-league shutdown in 2020 and then because of visa issues in 2021.

- Top prospect Bryson Stott's Opening Day call-up has been made official. The Phillies selected his contract, and to make room for him on the 40-man roster, recalled catcher Rafael Marchán and place him on the 60-day injured list with a hamstring strain. Stott will wear No. 5 in a tribute to his childhood friend Cooper Ricciardi, who passed away from cancer while they were high school. The Inquirer's Matt Breen tells that story HERE.