What is the Phillies' optimal batting order? 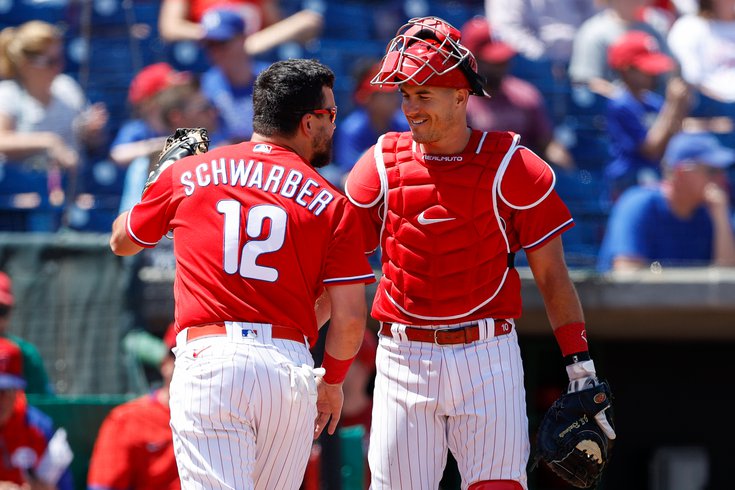 Where should J.T. Realmuto and Kyle Schwarber be placed in an optimal batting order.

A lot goes into picking the right batting order. And with the DH now in the NL, it's one of the few places where Joe Girardi or any other manager could have a real impact on a baseball game.

Typically, you'd like to have a speedy guy who gets on base leading off, a couple bats that hit for average next, followed by your power hitters and then your weakest guys at the tail end of things.

The Phillies are lacking any kind of clear structure when it comes to assembling a batting order, with a lot of slow-ish power hitters on the roster. They must find a way to maneuver them into a workable order. While past performance is far from a guarantee of future results, it is a good jumping off point. We decided to scour the statistics, and try and place each likely Phillies Opening Day starter in his proper place, based on how each has fared in each batting slot so far in the majors so far.

There is no doubt that this will change with great frequency as personnel and matchups changes (as well as righty-lefty platoons). But just for now, here's what the stats say the Phillies' optimal batting order should be:

Leading off: Jean Segura, second base

Segura has his best production, as a whole, hitting second. However, relative to the rest of the Phillies batters, his leadoff stats are far and away the best of any hitter, and he's our pick to start things off. Last year, he led off 34 times, but hit just .245. However, even those 2021 numbers are still better than Schwarber's career average leading off which is .230. He's getting older, but he still has the best skill set on the team for the job. And for that speed — well, if you think someone on this 28-man roster has plus speed, we're all ears.

Schwarber is an interesting case. He has more career lead off at bats than at any other batting spot, and is probably the most likely guy to lead off for Girardi, but he only hits .230 in the leadoff role with a .323 on base percentage. He gets on base more than Segura overall, which is his best argument to lead things off, but based on past performance, he is better equipped for hitting second. Segura may be getting a bit older but should have no problem setting the table for the team's big bats. Schwarber did hit 41 homers leading off, the most of any position he's hit in.

No need to waste time here. Harper has had a remarkable 2,641 of his career 4,557 at bats (58%) in the three hole and as the reigning NL MVP, he will surely get the majority of his plate appearances there.

Castellanos has hit third for most of his career and has limited at bats in the cleanup spot (over 1,000 hitting third compared to just over 300 fourth), but his numbers in the four-spot are pretty impressive. You want a guy who can hit for average and for power hitting fourth, as the Phillies' first three guys should be able to get on base quite a bit for Castellanos. He's the right fit for this role and a powerful middle of the order hitter.

Hoskins has hit 4th the most of any position during his career with mixed results (.257 batting average and 57 of his career 118 home runs). However, in the 20 games he was hitting 5th he was an absolute on base machine, with a crazy .471 on base rate with 21 hits and 18 walks. Obviously it would be a tall order to expect him to post numbers like that in the 5-hole over the course of an entire season, but he'll have tons of RBI opportunities hitting fifth and his walks will help to give the relatively strong bats behind him chances to drive in runs themselves.

Many projected lineups have Realmuto hitting second, and that is perfectly fine. But the numbers throughout his career — which are the most consistent of any hitter we examined — have him pretty well-suited to hit sixth. He has his best batting average there, and in less total at bats he's generated pretty decent power numbers.

Gregorius has hit 19 homers in the seven hole and the Phillies would love to get some power in that spot this season. With the top five or six roles locked up, likely, by more talented hitters Gregorius is a perfect fit to hit 7th.

We're going to roll with Bohm as our third baseman, just based on him having more MLB experience than Bryson Stott, who has none. And with Stott being a rookie, he'll likely be at the back of the batting order anyway. Bohm's lines at every batting spot is striking due to his lack of power. He has 11 total homers in 540 career ABs. So if we look at his effectiveness at the plate in general, batting 8th has been his strength this far.

With only 71 career big league at bats, the sample size is small. But the Phillies will be looking for Vierling to turn over the batting order in the ninth spot and he had five hits in 16 ABs there last season.