Between the Phillies' big moves and it being the first "normal" Opening Day in years, Friday was a long time coming 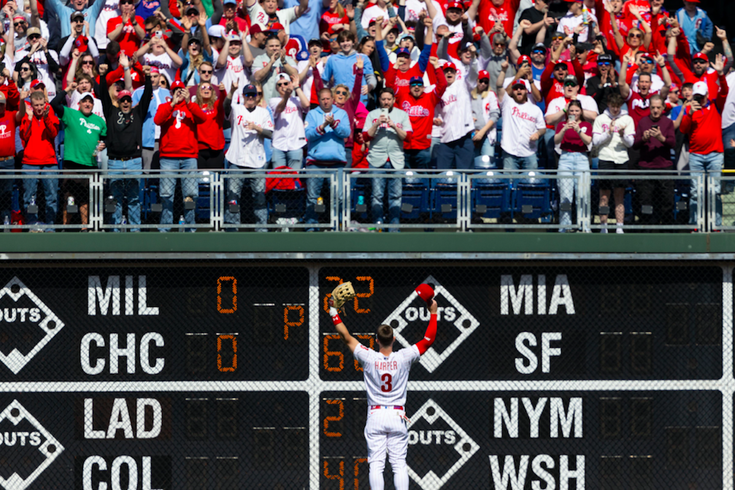 Oscar Alvarado couldn't sleep the night before. Opening Day was hours away. It was his holiday, and it was a long time coming.

Instead, he hopped in his car at 2 in the morning and rode around Citizens Bank Park, "just to get the feel," as he put it.

Two summers ago, Alvarado, Brett MacMinn and a group of dedicated fans who would be established as the Phandemic Krew huddled around the ballpark's center field gate to get whatever live look they could of Phillies baseball, doing so in a season where the coronavirus pandemic drastically shortened the schedule and didn't allow for any spectators.

On Friday, having since grown in numbers and connections, the Krew was out in full force in the right field's upper deck, cheering the Phillies on as they began their 2022 campaign with a 9-5 win over the Oakland Athletics.

In the big debuts of Kyle Schwarber, Nick Castellanos, and Bryson Stott, the sellout crowd was electric, and "MVP" chants were aplenty for the returning Bryce Harper.

It was Opening Day, the first "normal" one in years, and with sights set on the postseason, one with more hope and excitement behind it in maybe a decade.

It was a holiday, and it was a long time coming.

"To be back in the ballpark, to be honest, 2019 was the last time we had a normal season," Alvarado, one of the Krew's two co-founders, said. "This year, 2022, is the closest we've had to a normal season. Just to see everybody out here, we're in Section 301 and I can go down to any row and have a conversation with anybody because these are all relationships that we've built starting from 10th street outside of Citizens Bank Park. It's everything to us because me and Brett, we got together and we created something that's positive."

Anthony DiDomizio, a devout baseball fan from Folsom, was on the other end of the outfield underneath the scoreboard in left. He was decked out in a No. 8 Castellanos jersey that he wanted to be sure he had for his first trip to the ballpark in nearly three years.

Like Alvarado, DiDomizio didn't sleep much the night before either. It was his holiday too, and it was a long time coming.

"Honestly, I was kind of tearing up a bit when I was walking around the concourse earlier," he said.

Whatever emotions took hold before the game turned into unbridled excitement once Schwarber stepped up to the plate for his and the Phillies' first at-bat of 2022.


After working a full count out of Oakland starter Frankie Montas, Schwarber turned on a pitch low in the zone and launched it 426 feet into right. 1-0 Phillies and a fired-up curtain call one batter into the season. The place went nuts.

"It was like it wasn't real," Alvarado said. "I couldn't believe it. It came right toward us over here in right-center, and it was a bomb! And just him going around the bases and receiving the love of Philadelphia and showing that passion, that's the type of guy we want here."

"To have Schwarber lead off with that homer set the tone, I think, for the entire season," MacMinn said. "That listen, it's going to be an offense that's going to be a force to be reckoned with, and fans, the city of Philly, and MLB need to take note because this is where it is. This is where you need to be."

The thought that ran through Randy Farrow's head after Schwarber's homer: "Welcome to Philly!"

"He's got such a violent swing," Farrow, out of Magnolia, Delaware, said. "I was like 'wait until he puts a hit on that bat' and it was GONE! We were going crazy!"

Farrow was wearing an Iron Man costume at the game, along with Logan Yannuci dressed as Wolverine, and David Wardwell as Captain America. (Their Thor was busy in Asgard, Farrow joked, so they were handing the hammer off to whoever stopped by.)

Sixteen years ago, the three wore Homer Simpson masks up in the left-field terrace — not too far off from where the Phandemic Krew was Friday — during Ryan Howard's unforgettable 58 home run NL MVP campaign. They were Howard's Homers. Yannucci was seven years old at the time. He was the kid that had Howard's home run total painted on his shirts. He needed a lot of them back then.

Fast forward to 2019 and the standing room section over Ashburn Alley. The fan group had to change with the team. Harper was the big new star. Superheroes clicked. Comics mixed with baseball, they embraced it. Harper's Heroes stuck.

"You walk around the stadium, everybody wants an interview, a picture taken, but most importantly, I do it for the kids. I have three kids of my own and they love me as Wolverine, love me as Dad, and it's just great being able to walk around as a superhero."

It was great to see the Phillies start off with a win too, even after what was a solid Aaron Nola performance fell apart in the seventh and those fielding concerns reared their ugly head.

It's October or bust with this team, and by late Friday, the Phillies took that first step forward by doing exactly what they were built to do: score lots of runs.

After Stott and Schwarber each knocked in runs to pad the Phillies' lead in the bottom of the eighth, new reliever Corey Knebel came in to close things out.

It was a holiday, and it was a long time coming.