Moniak, Stott, and Bohm are trying desperately to buck a recent trend among Phillies top prospects: They never pan out 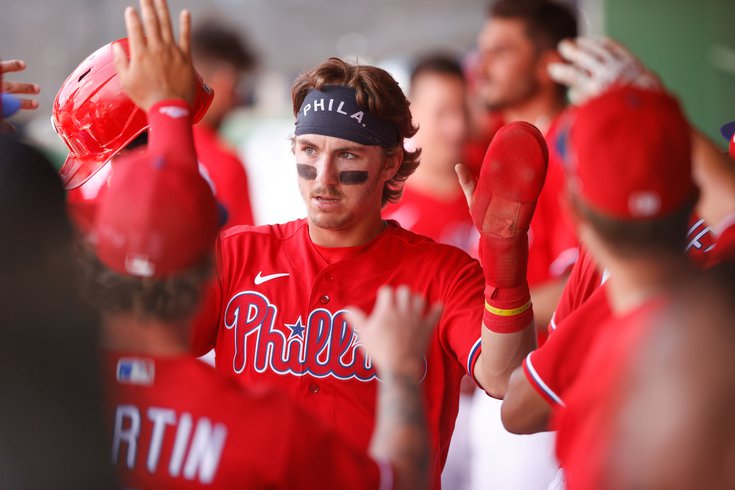 The Phillies will start the 2022 season with four (if you include the currently injured Mickey Moniak) home-grown former Baseball Prospectus top 100 prospects on their 28-man roster.

One, Aaron Nola (the 60th top-rated prospect in 2015) has solidified himself as a top of the rotation arm and occasional Cy Young contender. The other three, former first overall pick Moniak, and first-rounders Bryson Stott and Alec Bohm, are trying desperately to buck a recent trend among Phillies top prospects.

They almost always wind up sucking.

We mean this in the most respectable manner, of course. Being a highly-touted MLB prospect is far from easy, and just because you are listed among the top 100 young players in a given year doesn't mean you'll have an easy path to career success in the big leagues.

However, in the last 10 years (and even longer than that — but we will keep it to 10 years as not to make this article novel-length), the Phillies have had absolutely awful luck with nearly every single player they've had land on the top 100 list. Some have gone on to better things with other teams (like J.P Crawford) and some never stepped foot in Citizens Bank Park. Others have netted a decent return in a trade (like Jorge Alfaro).

If Moniak, Stott and Bohm are able to earn and keep starting jobs in 2022 and beyond, it will be a nice change of pace for a farm system that has had highly touted players flame out year after year.

The Phillies have had 19 different players that they developed themselves appear on Baseball Prospectus' top 100 list since 2013. One, Nola, has become a reliable contributor. Three were flipped to bring in Jean Segura and J.T. Realmuto respectively. Most of the rest are either grinding it with another organization or are out of baseball all together.

(Note: If a player appeared in multiple top-100 lists, he is listed with his highest rank and year):

How acquired: 2010 first round pick

End result: The Phillies traded Biddle to the Braves for Yorvis Medina, who also never appeared in a game with the Phillies. He's pitched in relief in 99 career games with mixed results.

End result: Traded to Mariners for Jean Segura and two relievers, hitting .256 with a Gold Glove award in three seasons with Seattle

End result: Hit just .151 in 2019, was put on waivers and claimed by Reds; has played in four major league games since

End result: Traded to Marlins for J.T. Realmuto, has hit .252 there

How acquired: First overall pick in 2016

End result: Released by Phillies and signed by Pirates in 2022

End result: Traded to Mets for Asdrubel Cabrera in 2018

End result: Released by Phillies and signed by Giants in 2021

End result: Traded to Rangers for Ian Kennedy and prospects

End result: Sent to minors after struggles in 2021, back in the majors to start 2022

End result: Made 28-man roster out of spring training in 2022