Who deserves most blame for Phillies pathetic season so far? 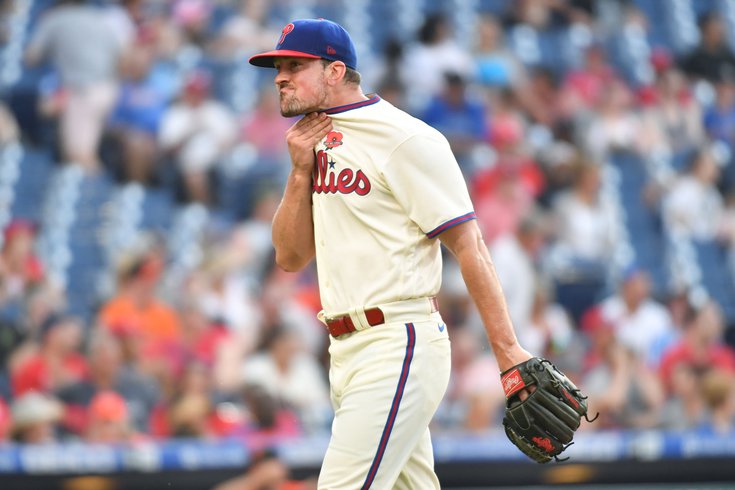 Andrew Bellatti was the latest Phillies reliever to blow a game this season.

The Phillies were supposed to be good. They are not.

If you are reading this you don't need a long recounting of how awful this season has been. Blown leads galore. Defensive blunders aplenty. Questionable managerial decisions abound.

It's been hard to watch the Phillies this year and it feels pretty inevitable that this will be the next chapter in what has been a wholly forgettable decade of baseball in a town that loves winning.

So what the heck is actually going wrong? And who is to blame for it? After almost 50 games, the Phils are seven games under .500 and more than 10 games out of first in the NL East.

Here is a look at the potential reasons for the Phillies lackluster performance and a ranking of who is most to blame for it:

What did the Phillies front office expect when they put together this team?

One of the worst defenses in the league last year got the addition of two slugging DH-types in Nick Castellanos and Kyle Schwarber while committing to Alec Bohm at third every day. With no answer at centerfield either, the Phillies essentially entered the season with a lot of promising bats, but with more than half of their defense questionable and unreliable at best.

Dave Dombrowski and company also elected to rebuild their bullpen for the third year in a row by signing a bunch of 30-something former closers in Jeruys Familia, Brad Hand and Corey Knebel. All three have been shaky at key moments this year and the homegrown fill-in arms behind them have been no better.

We could end the article right there. The decision-makers didn't put the Phillies in position to succeed on Day 1, and they've been doing their best without having any of the right ingredients to win with. But it goes deeper than that...

Somehow no matter what combination of arms this team puts in the pen, they blow games and make it nearly impossible for the offense and starting staff to succeed.

We'll update this table we used a week ago. The bullpen has only gotten worse this year, and has been a nightmare since 2020:

The general manager can only do so much. The players have to do their jobs. The bullpen has inherited 88 runners this season, third most in baseball. They have allowed 32 of them to score, also the third most. They cannot keep a lead, and it seems like every single player is responsible for a big blemish so far this season. It's been brutal.

Girardi isn't to blame for the makeup of the team, nor is he responsible for the individual performances of struggling players. But one does have to question exactly what the heck he is even doing in the dugout this season.

Most of the key decisions Girardi has made in important spots have been wrong. Sending a reliever who is pitching badly to the mound when a save or hold is needed, tinkering with the batting order endlessly, and making unnecessary substitutions are just some of the baseball sins he has committed. However, he is not worried about his job, even after losing four in row in embarrassing fashion recently.

Maybe he'd be doing a little better if he did worry?

Bryce Harper not being able to play in the field has forced Schwarber and Castellanos to play in the outfield every day. Didi Gregorius is a valuable bat who continues to be sidelined. Mickey Moniak was red hot in spring training before breaking his hand. A few bad breaks have certainly cost the Phillies so far this season.

We're going to relegate defensive mistakes down at the 5-spot on our rankings because frankly, everyone knew they were bad defensively, and the thinking is that over the large sample size of 162 games, their handful of extra mistakes would be made irrelevant by an offense that can mash the ball.

The offense has been good, but it is really the pitching that has been unable to correct for defensive blunders this season. You can have a bad defense or a bad bullpen, but if you have both you can't win.

After a pretty ugly start to the year the Phillies starting five has actually been a strength of the team. Here's how they measure up so far against the rest of the major leagues:

Just like last year, Phillies starters are going deep into games (in part because the alternative is a bullpen that stinks). They are near the top of most important categories so far as Aaron Nola, Zack Wheeler and Kyle Gibson continue to put the Phillies in position to win night after night.

Maybe the Phillies offense hasn't lived up to the high expectations many had prior to the season, but they have come pretty darn close. Here's one last table, comparing Philly's offense to the other 29 teams:

Are these numbers earth-shatteringly impressive? No. But on paper, it's not a team that should have a 21-28 mark, the 20th best record in the league right now. The hitters are not the problem.