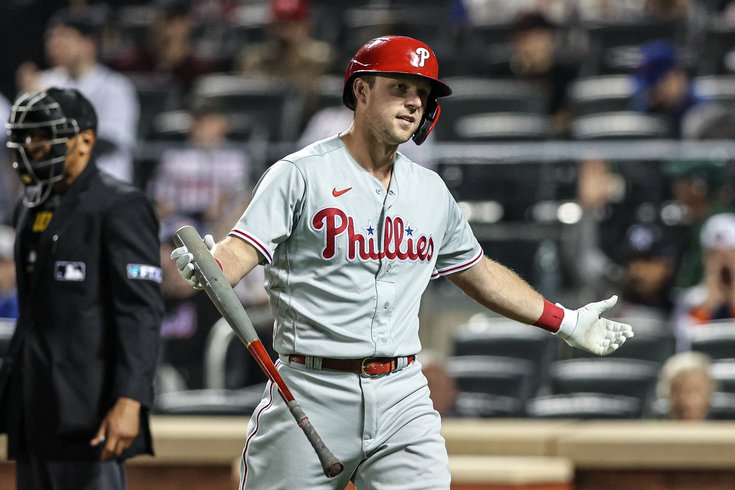 Rhys Hoskins is in disbelief after striking out.

The Phillies? Well, they ain't looking too good. After the Mets swept them over the weekend in Queens, the Phillies fell to the six games below .500. They're now 10.5 games behind New York in the National League East race and five games out of the second Wild Card spot. This is unquestionably not the year Phillies fans envisioned themselves seeing after the franchise's splashy offseason. All bark, no bite! That defines this era of Phils baseball.

As I do, I'll give a quick series recap and hand out five awards to the Phils for playing a game that vaguely resembles baseball.

• Zach Eflin was shelled for seven runs in an 8-2 loss on Saturday.

• The Phillies went full Phillies on Sunday. Taking a 4-3 lead into the bottom of the ninth at Citi Field, the Mets' Nick Plummer recorded his first major league hit with a solo shot to tie things at 4-4. New York walked it off in the 10th following a double from Eduardo Escobar.

What Would You Say You Do Here Award: Joe Girardi 🤷

I understand that a manager can only do so many things to contribute to winning baseball. They don't create the roster. They're not the ones in the batter's box or on the mound. What goes on in the field of play is out of their control ultimately. At a certain point though, a team has to ask themselves if a manager is doing literally anything at all that can be construed as a positive. I don't have the slightest clue how that could be the case for Joe Girardi.

Girardi isn't the reason that Rhys Hoskins goes cold as Antarctica at a moment's notice or why Ranger Suarez implodes, but a manager has to do something, anything, to get a veteran team to at least act like they care. This reminds of Brett Brown during his time with the Sixers. Not everything with the team was on Brown, but what was Brown doing that actually demonstrated positive value to the Sixers? By 2019, I had no idea.

Girardi is going through the motions in Philly. The guy doesn't want to be here. He's checked out. If a manager is checked out in May that's going to spill into the way the players carry themselves. A playoff spot is increasingly doubtful for this team, but what's the point of raising the white flag in May with a manager acting like he's a second-semester high school senior?

What purpose does it serve to keep Girardi around? Why double-down on mediocrity? Why not try literally anything to light a fire under the tails of this roster?

Everyone Is Wasting Your Time Award: Bryce Harper ⭐

Philly fans like to say that the Sixers are wasting Joel Embiid's prime. That's even more true for the Phillies and their own generational talent in Bryce Harper. Hey, at least the Sixers keep getting him to the playoffs. The Phillies haven't done so since I was in high school. Harper is surrounded by a group of players who make a graveyard feel lively.

During the Phillies' seven-game road trip, Harper hit .387 with an on-base percentage of .424 and a slugging percentage of .581. Those continue to be MVP numbers like Harper's been putting up for this whole season. It doesn't matter if they're big-money free agent disappointments or poorly developed homegrown players, no one on this team, no one in this organization overall, has done enough for Harper since the franchise signed him to that gigantic 13-year contract in 2019. The Phillies are wasting the prime of one of the best hitters of the 21st century.

It's rough for any Phillies fan who wants to simply flip on a game on TV and watch Harper rake. Yes, that's definitely fun, but other than this four plate appearances per game, they're treated to nothing worthwhile. This feels akin to the way Mike Trout was just floating in the abyss that the Angels inhabited before this season. It reminds me of the early 2000s Texas Rangers and Alex Rodriguez.

A blue and maroon Harper jersey will make for a nice addition to the Mitchell & Ness catalog in the next decade or two. That might be all he's remembered as though through no fault of his own: a supremely gifted masher who had a cool flare, dope uniforms and played on the most frustrating team in the sport.

Thank You for Showing a Pulse Award: Zack Wheeler ⚡

Wow, look at that. A pitcher showing up in a marquee matchup! Zack Wheeler pitched six innings on Sunday, allowed just one earned run and struck out seven batters. Wheeler is trying to reclaim the form he had during his Cy Young-worthy 2021 campaign and he's inching back there. In five starts in the month of May, Wheeler is sporting a 1.65 ERA with 40 strikeouts. Clearly, I'm not optimistic about what this summer will bring for the Phils, but Wheeler continuing to pitch like this is one step towards competency.

I was the guy before the season that said the Phillies could possibly out-slug everyone no matter how bad their defense may be. With the non-Harper and non-Segura hitters being as inconsistent as they've been in 2022, they're totally ill-equipped to overcome their horrendous defensive situation.

This is where Harper's UCL injury looms large. Harper is no Gold Glove fielder, but he's competent with a strong arm to keep baserunners at bay. With him being relegated to designated hitter duty likely for the entirety of 2022, that adds one more suspect fielder to the diamond in lieu of Harper and the trickle down effect has had disastrous results.

When coaching my Little League squad, my dad liked to say that our team had six first basemen, meaning the vast majority of the team couldn't handle prime positions in the field. That's the Phillies. They have a handful of DHs in their lineup and they're stuck playing the field. When the pitching staff isn't bringing it and the defense goes full "Bad News Bears," Phillies fans are just left ripping their hair out.

Hoskins went 1-for-11 at the plate over the weekend. In his age-29 season, Hoskins has career lows in batting average, OBP and slugging. It's not cutting it. It's just not.

The Giants and old friend Gabe Kapler head to South Philly for a three-game set beginning Monday afternoon. Kyle Gibson and his 3.94 ERA will be on the mound for the Phils.