Why the NFL loves the Eagles’ Jonathan Gannon 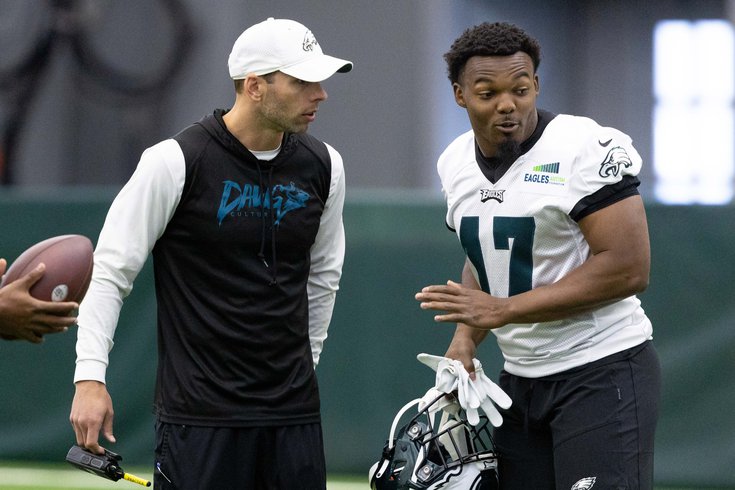 "Sustained positive enthusiasm," is how the Eagles' second-year defensive coordinator described his 34-year-old edge rusher who is trying to embark on a late-career comeback after a torn Achilles' wiped out much of the 2021 season.

If B.G. isn't the most effusive person at the NovCare Complex, however, Gannon might be the other contender for that mythical title. Gannon is a relentlessly optimistic rising star in the coaching profession with boundless energy and an emphatic "Happy Tuesday" for any media member who needs a little jolt at the NovaCare Complex on coordinator days.

Gannon is a bit of an enigma to the Eagles' fan base, though, as a modern, shape-shifting defensive mind who has the temerity to claim that sacks are not a winning statistic in the city where many believe it’s the only one that matters since the days of Buddy Ryan.

For the record, Gannon actually likes sacks, which came few and far between in 2021 for the Eagles, but he's far more concerned with generating turnovers and limiting explosive plays, the two categories that he and the new breed believe are most important when it comes to the actual demarcation line between wins and losses.

Howie Roseman already has stated the Eagles are just renting Gannon, who nearly had the Houston head coaching job in the offseason and also wowed Denver and George Paton, the Broncos GM who knows and likes Gannon from their Minnesota days, and the Vikings themselves during head coaching interviews.

Those who question why Gannon is getting those interviews have typically never met him and when they do, it usually takes about five minutes before an "Oh, I get it now."

"It was good," Gannon said of his interview tour. "It was humbling to have the opportunity to get a chance to interview with a couple different teams... Learned a lot from it, but that's kind of in the past and I'm focused on right now getting our players better."

By this time next year, if talented additions like Haason Reddick, Jordan Davis, Nakobe Dean, James Bradberry and Kyzir White are even close to advertised, Gannon will likely have already sealed the deal.

In the past, the ambitious Gannon would be champing at the bit for that outcome, almost visualizing the next step.

He got his start like most as a quality control coach and quickly realized he was ready to be an assistant secondary coach. From there Gannon got antsy and wanted to run his own position room. Once that goal was accomplished, it was about taking control of an entire defense, something Philadelphia tagged him for whether Josh McDaniels or Nick Sirianni was going to be the head coach in the post-Doug Pederson era.

Gannon, though, is comfortable where his feet are for now. His wife wanted to be on the East Coast, he loves the passion of the Philadelphia fan base and he even liked the football IQ of those who cover him (admittedly that last one might be a pit of pandering). More so, though, he has the confidence to understand his time is coming even with the preference nearly always slanted toward the offensive minds in the current NFL hiring cycles.

"Just excited about being in the seat that I'm in right now," Gannon claimed.

While most assume Gannon is part Zimmer and part Matt Eberflus when it comes to philosophy, the biggest influences on his defensive mindset are actually one of his best friends, Chargers head coach Brandon Staley, along with mentors like Emmitt Thomas, Jerry Gray and Gregg Williams.

His philosophy is geared toward helping players instead of always defaulting to execution as some kind of cure-all. In Gannon's mind, if the opponent's Os are better than his Xs, it's a coach's job to do everything he can to close the gap, something he was able to do last season at times with less than a full deck.

His vision is about toggling between a host of different looks depending on the opponent. Forget 4-3 or 3-4, you're going to see it all with Gannon now that he has the weapons to employ, including five-man overhang fronts where a weapon like Reddick will be lined up opposite Josh Sweat.

“It’s a matchup-driven league,” Gannon explained. “So we’re looking to accentuate some of our matchups.”

In that way, Gannon and Staley, who first met as 10-year-old AAU basketball players in the Cleveland area, have taken an offensive-minded math equation to the other side. Attack when and where you have the numbers.

With all the chess pieces arguably accounted for in the front seven, Gannon also wants more specificity from his teachers.

The Eagles are having their edge rushers meet with Jeremiah Washburn, while Tracy Rocker is working with the interior pass rushers and Nick Rallis handles the off-ball linebackers.

“Just a little more time on task because we play different forms, different spacing, and we wanted to group those guys together,” Gannon explained. “There are times where they’re going to meet together and there are times when they meet separately, but the different front structures that we play [meant change was needed].”

One thing Gannon won’t do is play the lowered-expectations card when it came to last season even though the talent he had was bottom-third in the league.

“No, I wouldn’t say that,” Gannon said when asked if he was handcuffed in 2021. “We did what we wanted to do last year... My No. 1 concern or goal is to make sure that we’re playing good enough on defense to keep us in games and play good football to help our team win.”

The final product being chased is consistency. If Gannon’s Eagles accomplish that goal his next career step is assured.

"You guys know I'm not big on stats, but got to the playoffs, lost in the first round. I don't have a great taste in my mouth because we want to do more than that," said Gannon. "That's one of the things in the back of my mind, is to take the next step...

“How we do that is consistency."