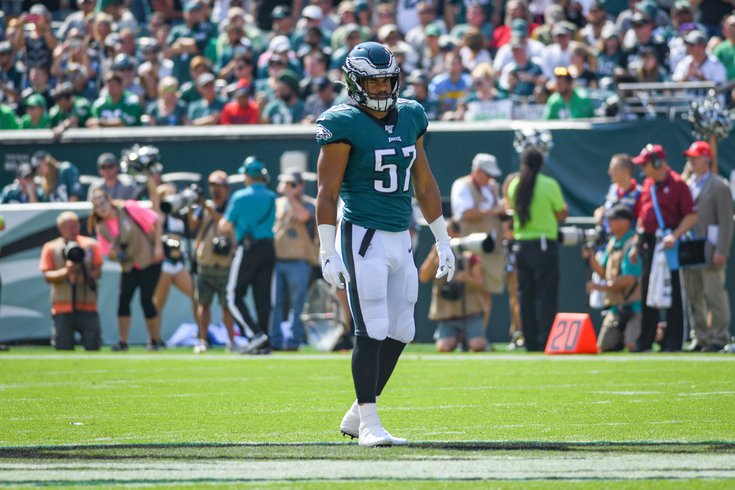 T.J. Edwards is a good player, but he'll face competition from Nakobe Dean for his starting job.

The Philadelphia Eagles will begin OTAs this week, though last year those practices were more about mental training, and less about physical competition. It won't be until training camp in July that roster battles will truly take shape. Still, here are five we're looking forward to.

Edwards was the Eagles' best linebacker last season. He's smart, tough, instinctive, and he makes a lot of tackles (130 in 2021, only 9 missed tackles). There's a lot to like.

However, his starting job is in jeopardy after the Eagles signed Kyzir White in free agency and they selected Dean in the third round of the draft. Dean is probably the bigger threat to Edwards, as a candidate to wear the green dot helmet (the defensive play caller).

If Dean isn't a starter in 2022, it will be viewed as a disappointment, considering his stellar college career as well as his status as a first-round talent who inexplicably fell to the third round. According to a consensus big board that pulled in input from 82 draft analysts, as compiled by Arif Hasan of The Athletic, Dean was the 24th ranked prospect in the 2022 NFL Draft.

#JimmySays: Edwards will find a role in the Eagles' defense, but I expect Dean and White to start Week 1, barring any injury setbacks.

It appears as though Landon Dickerson will stay at LG in 2022, after he and Jordan Mailata formed a 700-pound wall of defensive linemen-moving meanness on the left side of the line in 2021.

That would leave Isaac Seumalo in need of a new home along the line. If he's going to continue to start for the Eagles, that would have to be at RG.

Seumalo is a perfectly fine NFL starter, but the Eagles also have very strong depth along their offensive line, and Driscoll could be legitimate competition for a starting job. Both Seumalo and Driscoll have been unable to stay healthy over the last two seasons, so second-round pick Cam Jurgens could also potentially be in the mix as well, though it's worth noting that he has never played guard.

#JimmySays: Seumalo is the heavy favorite to start.

Epps played 750 snaps in the regular defense last season. Wallace played 377. Right now, Epps is the better player, however, Wallace was a 2020 fourth-round pick, and he's going to get an opportunity to win the starting job. Unfortunately, he just hasn't shown enough through his first two seasons to project that he'll be a quality NFL starter.

#JimmySays: Epps is the heavy favorite to start, barring a move for a veteran safety.

TE2: Grant Calcaterra vs. Jack Stoll vs. the rest

Dallas Goedert won't often leave the field as the TE1, but it will be interesting to see who gets the majority of the snaps when the Eagles use two-TE sets. Calcaterra is a better receiver than he is a blocker, while Stoll is a better blocker than he is a receiver. As such, they may split time, perhaps as a TE2 tandem. We'll see if either player can improve in their respective deficient areas and separate from the other.

Tyree Jackson's recovery from a Week 18 ACL tear last season is worth monitoring as well, though it feels likely that he'll begin the season on the PUP list. And then there's J.J. Arcega-Whiteside, I guess, who is moving to TE to try to salvage his NFL career. To be determined if he can bulk up and be a functional in-line blocker (as opposed to just on the perimeter).

#JimmySays: I think the Eagles will give Calcaterra every opportunity to win that job.

P: Arryn Siposs vs. some other punter not already on the roster

Siposs was one of the league's worst punters in 2022. How have the Eagles not brought in competition for him yet? Four teams selected punters in the 2022 NFL Draft, so the Birds could be waiting for a punter from one of those teams to shake free, or maybe they could be mining the USFL? But even if that's the case, why wouldn't they at least want to take a look at an additional punter in the meantime?

#JimmySays: They're not actually going to let Siposs run unopposed in camp again, are they?