The worst game I ever attended: A South Philly doubleheader meltdown 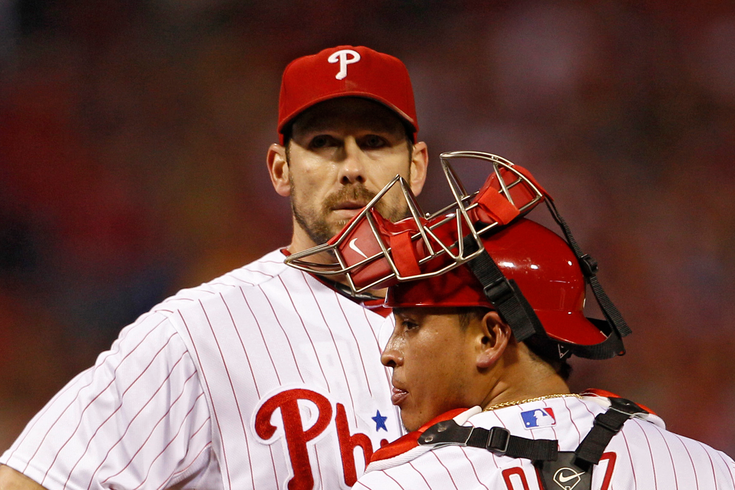 Cliff Lee with Carlos Ruiz during a fourth inning meltdown.

It's the doldrums of the summer. The Sixers are coming off yet another second-round exit. The Flyers are stuck in irrelevance. The Phillies are enjoying their yearly tradition of angering the entire Delaware Valley. Eagles' training camp hasn't fully kicked off. As the sports world slows down, it's time to look at the past.

I'm debuting a two-week running feature. A "worst of" Philly sports categories this week followed by a "best of" next week. Might as well get the bad stuff out of the way before ending on a good note, huh?

I'll delve into the best and worst games I've attended, games I've watched on TV, coaches, uniforms and plays. As a frame of reference, I've just recently turned 28. If I don't have Connie Mack listed as the best coach I've seen, it's because he died before my parents were even born, so get off my ass ahead of time.

That takes us to the worst sporting event I've ever attended. Well, I guess I'm cheating since I'm going with two games. Long-time followers of my writing and podcasting may remember my tales of this. Sunday, October 2, 2011. I traveled twice to the Sports Complex that day, once in the afternoon and one again at night, crushing me more and more as time went on, leaving me destitute as I walked home. I had walked that walk following an infinite amount of crushing losses in my life. At the ripe age of 17, I had never been crushed more.

It was a windy fall day as a sat in the top section of Lincoln Financial Field. It was the first time I had attended an Eagles game in three years, the last one coming when the Eagles blew out the Cardinals on Thanksgiving in 2008. The Eagles' infamous "Dream Team" had gotten off to a rocky start that season. They were 1-2 as the 49ers came to town. Every game feels like the season is hanging in the balance for Eagles fans, but it was more true that day than most. The hype for that squad was overwhelming and a 1-3 record would simply not cut it under any circumstances.

An electric, 2010-esque performance from Michael Vick, one in which he totaled nearly 500 yards of offense, had the Birds cruising with a 23-3 lead in the third quarter. Maybe this Eagles team truly was a dream team! They had so much talent offensively with Vick, LeSean McCoy, DeSean Jackson and Jeremy Maclin, with those latter three players turning in rock solid afternoons as well.

I was not naive when it came to the Eagles. In a post-Super Bowl world, perhaps I was even more hardened then, a mix of demoralizing losses in my youth, teenage angst and the uneasiness of my senior year of high school churning in my mind with chaos blooming. I had seen this game before, but the combination of being in the crowd at the Linc and the fun that I assumed would come later that evening across Pattison Avenue had me throwing caution to the wind.

Well, when I walked out of the stadium, the score was 24-23 and the Eagles had lost. 21 unanswered San Francisco points dropped the Eagles to 1-3. "A quarter of the season is over and this is where they are. They stink," is what I thought when I made the trek back to my house in South Philly.

I witnessed this monstrosity of a play from running back Ronnie Brown too. If I didn't see it in person, I wouldn't have believed it actually happened:

I was sporting my midnight green Brian Dawkins jersey (I had yet to upgrade to a new one after he left in 2008) and a kid who couldn't have been older than 10 saw me walking by and asked me if the Eagles won on my trip home. He wasn't surprised when I told him they didn't. He said they always lose. I agreed. I thought he would be saying that for the next 60 years, unaware of the triumphs that would come just six years later. My Bobby friend I was with thought the same.

All was not lost in my mind though. A Phillies team that had won 102 games was playing at Citizens Bank Park that night. The Phils had won the World Series in 2008 (more on that during "best" week). They made it again in 2009, but fell to the Yankees. They had an even better regular season in 2010, but fell short in the NLCS against the Giants. This would be the postseason that vaulted the Phillies back to the World Series and brought Philly its second championship of my lifetime. I was sure of it.

It was Game 2 of the NLDS. The Phillies had out-slugged the Cardinals in Game 1, rocking them for 11 runs behind home runs from Ryan Howard and Raul Ibanez. Cliff Lee was on the mound. Despite Lee playing in fewer than two seasons in red pinstripes, he already had become a bit of a folk hero for his 2009 playoff heroics, only to be dealt that following winter and reacquired the next one.

They had the best record in baseball. The Big Piece and Chase Utley raked in Game 1. A Cy Young winner was on the mound who had a 2.40 ERA in 32 starts. I was ready for another parade.

The Phillies were up 4-0 after just two innings following huge hits from Howard and Ibanez yet again. A 4-0 nothing lead with Cliff on the hill? It was over.

What a fool I was.

Lee surrendered three runs in the top of the fourth inning, ultimately allowing five overall in six innings. The Phils lost 5-4. They would go on to lose the series in five games and have not been back to the postseason since.

Given my bias for actual being at the ballpark that evening, it was this game that felt like the end of this era for Phillies baseball more so than the Game 5 loss where Roy Halladay threw out his arm and Howard tore his Achilles. That Phillies optimism that had carried me since my freshman year of high school was over. They lost a game they had in their grasp and should've won. It was the Phillies at their most Eagles and I had just witnessed the Eagles at their most Eagles mere hours earlier.

It was also really cold that night. I had standing room tickets and lingered between third base and left field. Baseball-reference lists the game as being 50 degrees at first pitch, but 50 degrees on October 2 feels like 40 degrees. I asked Bobby, who was at this game as well, to switch standing spots with me because I was so cold. He said if I made the switch he would tell everyone in South Philly that I was terrified of the cold. I stayed in my spot and froze through my cream Jimmy Rollins jersey and Sixers hoodie.

After the Phils' final out. That cold feeling went away. I was simply numb. For the second time that day, Bobby and I walked home from the Sports Complex. This time, we did so in complete silence.