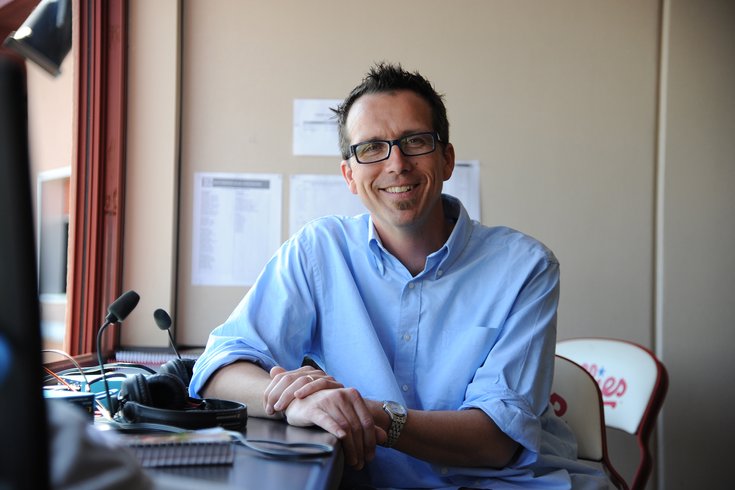 Baseball could wait. It had to.

A day after the lives of 19 children and two of their teachers were lost in the senseless mass shooting at Robb Elementary School in Uvalde, Texas, Phillies radio broadcaster Scott Franzke "wanted to do something different" to begin Wednesday night's coverage of the club's game down in Atlanta.

He told a story of his eight-year old daughter, June, who loves baseball and had the time of her life watching a game with him in the booth earlier in the season.

"She got to watch every play, she got to have free cheese pizza, she was so happy.

"This is the soundbite they'd run on camera through tears and choked speech. This is what I would say about my daughter if a man, a boy really, had walked in with a gun and opened fire at my child's school.

"I would be crying. My wife would be inconsolable. My friends and family would be in the frame supporting us through our grief. This is what you would see. You'd might even weep a little bit too watching. But you wouldn't weep for us, really. You'd get choked up because you'd think of your own son or daughter, or grandson or granddaughter. Max, or Emma, or David, or Michael, or whoever.

"You'd think to yourself 'Man, I can't even imagine what he's going through.'"

It was a heartfelt and heartbreaking commentary on an absolutely devastating tragedy, one of many coming from the sports world in the last two days.

Franzke, who is from Texas and was on the road with the Phillies, said he FaceTimed his three children — June, Loretta and Gus — before they left for school Wednesday morning and that he was lucky to be able to.

But he knew there were too many families waking up to an unfathomable level of pain.

Franzke continued that he believes the United States is the greatest country in the world, but that doesn't mean it's perfect.

"It doesn't mean we don't have problems and it doesn't mean we can't be better," he said. "We have a gun problem, we have a mental health problem and we have an anger problem. And all of us have the power to make a difference in one of these three areas. Big ways, small ways, always. Choose your way to help...please."

As he closed out, Franzke was choked up and his voice began to shake. His final point stung, and painted the picture of just how bad things have gotten.

"My eight-year old daughter, June, the one who likes baseball, her class gets bears for good behavior. They help a friend or clean up an activity or stay quiet during lessons, they get bears. And when they fill up the bear jar they get to have a party in class.

"When my wife talked to the kids last night about what happened in Texas, they didn't really understand the quote 'bad man did a bad thing' explanation. Too many unanswered questions there...

"But the term 'active shooter,' that's a term they know. And the reason they know is because they recently had another lockdown drill at school. And wouldn't you know it? They did a really good job during the drill. They got some bears. They filled up the jar... because they were good during their active shooter training... and they get to have a party..."