Worst Week: The lights go out on the Chip Kelly era in Philly 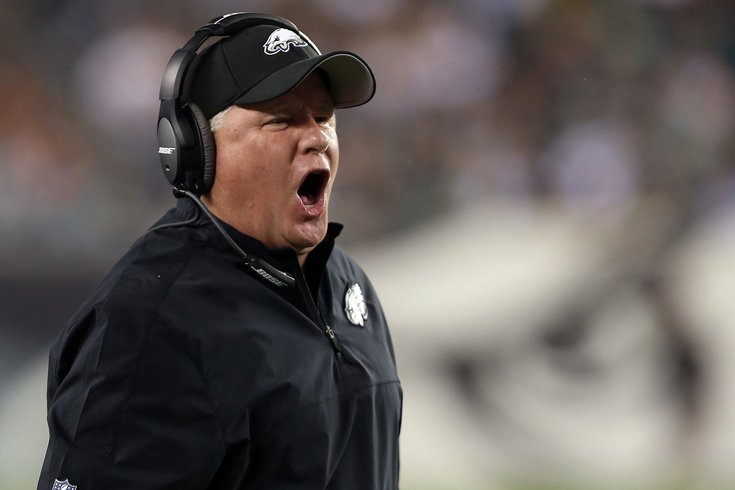 Chip Kelly being an angry weirdo.

The game I'm picking isn't close to the worst loss in Philly sports ever, let alone in my lifetime. It's not Ronde Barber running down the sideline and putting a nail in the coffin of Veterans Stadium. It's not Alshon Jeffery's drop in New Orleans that spurs perhaps the greatest Philly sports what-if ever: "What if Nick Foles won back-to-back Super Bowls and the Eagles traded Carson Wentz?" It's not Kawhi Leonard. It's not Juan Uribe and Brian Wilson.

As I touched upon on Monday, if you complain I didn't select an event that occurred before my time, it's not going to have the same emotional relevance for me and thus I roll with my options. I call 'em like I see 'em!

I'm going back to November 22 during Week 11 of the 2015 season for the Eagles. Off the top of someone's head, they may have no clue what game I'm talking about and that's totally fine. The Tampa Bay Buccaneers rolled into South Philly and rolled all over the Birds, spanking them 45-17 in an absolute thrashing. Doug "Muscle Hamster" Martin rushed for 235 yards. Pre-Lasik surgery Jameis Winston threw for five touchdowns and, improbably, zero interceptions. Mark Sanchez was allowed to throw 41 passes. It was a mess.

Also, tying all the Eagles wounds all together, I still absolutely loathed the Bucs because of the aforementioned Barber brother. It was whammy after whammy.

I had Eagles season tickets at the time and I didn't even go to that game. They had angered me so much the week prior after blowing a 13-point lead and losing to the Dolphins that I didn't even want to be remotely nearly the Sports Complex. I was in disgust. Coupled with whatever Saturday night college shenanigans I found myself in the the evening prior, this felt like a good game to sit out.

I sat in the living room of my college house and just felt like a complete idiot for supporting this team, for hoisting all my hopes and dreams upon Chip Kelly, for convincing myself that Sam Bradford was going to play like the Heisman Trophy winner he once was, that DeMarco Murray was going to have a spine and that Byron Maxwell wouldn't turn into a piece of burnt toast. All my roommates from Massachusetts reveled in my misery.

This has been a running theme the last two days: I'm a moron for believing in anything.

A loss like this absolutely sucked in the moment in terms of what a slop game it was, but it's what it symbolized that crushes me in retrospect.

It was the end for Chip, who was a messianic figure when he arrived in Philly in 2013. He took the league by storm with his blazing offense and made a second-year third-round QB look like a dude who could win Super Bowl MVP one day. He nearly beat a Hall of Fame quarterback-head coach combo in his first playoff game in the pros. It would be Kelly who eventually led a parade down Broad Street in the ensuing years. I knew it deep in my heart. He would make Philadelphia's collective dream a reality.

He was a god to my friends and me. We thought we were watching the NFL 2.0. There would be the time before Chip Kelly and the time after him. It turns out he was a megalomaniac who wrestled his way into power that corrupted him and had him burning out as fast as his offense seemed in Week 1 against Washington in 2013. A random guy on a barstool in South Philly might have been a better talent-evaluator than him too.

It was like Mick Jagger sang on "Angie," one my all-time favorite Stones songs: "All the dreams we held so close seemed to all go up in smoke."

Were the Eagles the Browns? Were "we" becoming a laughingstock? It's how it felt that day as I heard the jeers from my Pats fan buddies that hit as hard as the boos that rained down on the Birds at Lincoln Financial Field. There were constant power struggles and front office and coaching reshuffles between 2012 and 2016. I knew Chip was a goner. What happened to the man I thought could walk on water? Muscle Hamster stomped out the last flickering hope I had that Chip would straighten things out and bring the Birds to glory.

I will say this about the Chip era and those Massachusetts friends of mine. I proclaimed in 2013 that Nick Foles would beat the Patriots one day in the Super Bowl. Broken clocks, am I right?