Who won the week in Philly sports: Bryce Harper is playing like an MVP again 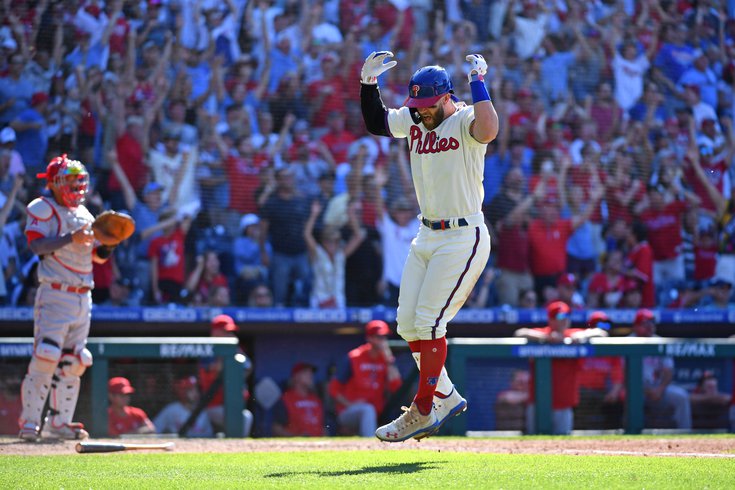 The Phillies remain 11 games out of first place in the National League East and 4.5 games out of the second Wild Card spot, but there is a renewed vigor with this ball club. Following Joe Girardi's firing and interim manager Rob Thomson stepping up, the Phils swept a playoff-contending Angels squad over the weekend and brought the thunder in the process. The Phillies smashed the Halos with 26 runs over three games and no player on the roster is carrying them quite like reigning NL MVP Bryce Harper.

The energy is positive right now both in the clubhouse and among the fan base despite the uphill climb the Phillies face to bring themselves back towards postseason contention. If they get close to that, it'll be because Harper is playing like a guy once more deserving of the NL MVP award. Harper has crushed it the past week and is leading the charge in the post-Girardi era.

It's because of this energy that Harper has won the week in Philly sports.

Harper is raking. Check out these stats:

Over the last week, Harper has played in five games. He's hit .278 with an on-base percentage of .435 and a Ruthian slugging percentage of .889. He's crushed three home runs, including a monster eighth-inning grand slam on Sunday that tied the game up at 6-6 and became the catalyst for the Phils' comeback win:

Look at the pure joy from Bryce right there. He's a dude who loves ball, knows how to own a Philly crowd, and delivers when the team needs him the most.

Here's what I wrote about Harper on Sunday in my series recap of the Phillies' sweep:

They cannot keep wasting his prime. They simply cannot. Not making the postseason four years into Harper's tenure in red pinstripes is totally unacceptable. Harper has a torn UCL and can't play the field, but he is raking just as much as he was during his 2021 MVP campaign. He might win the award again! The franchise is failing him and, in turn, the fan base though without properly building a contender.

Harper is on a Hall of Fame trajectory. He does not have the postseason credentials of the Jimmy Rollins-Chase Utley-Ryan Howard triumvirate that will lock him into the hearts of Philly fans forever, but he is the most talented Phillies hitter I've ever seen. I've said it again and again, the Phillies not making the postseason four years into Harper's stint in this city is unacceptable. It just is. As much as the organization thinks so and the fan base wishes, there is no quick fix to this franchise's issues and their 11-year playoff drought.

Girardi's firing does not change the deep-seated issues with the Phillies, but maybe, just maybe, it can provide enough of a spark to allow for entertaining baseball over the next three months. Harper not-so-subtly alluded to that after the squad's wild comeback win on Sunday:

If those winning ways continue, I expect Harper to "win" a bunch more weeks this summer.

Phillies fans don't miss him and it looks like the players are in the same camp.