Miles Sanders says the Eagles feel like an 'All-Star team' 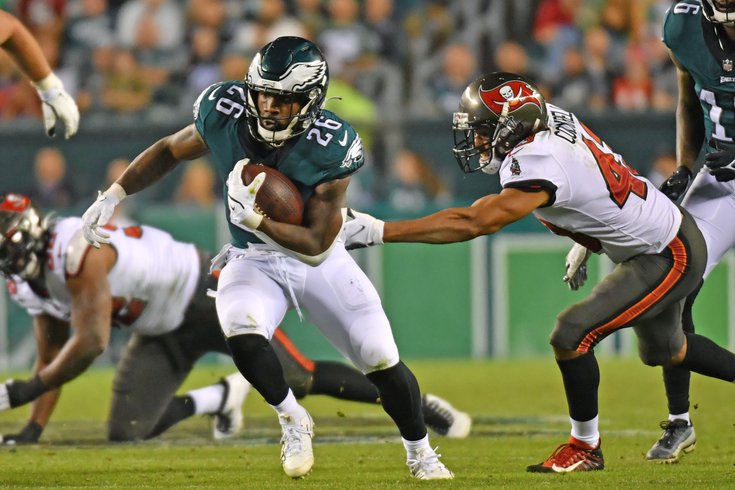 A lot of people are feeling good about the Eagles with training camp approaching, Miles Sanders included.

Between a returning coaching staff and roster that made a surprise playoff run and an offseason full of big splashes, it's admittedly hard not to.

But Sanders, inadvertently, might've hyped up the team in a way that would send any Eagles fan into a cold sweat.

In an interview with CBS Sports, Sanders said of the Eagles' offense:

"Oh man. We all feel like we're on an all-star team, so we feel great. We feel unstoppable, I'm not gonna lie. The vibes are great, always have been. Nick Sirianni is doing a great job just keeping the vibes right, the chemistry good. We compete a lot in practice. But we've gotta see. Its gonna come down to camp, taking it day by day, putting everything together." [CBS Sports]

Yeah, that one cuts a bit too close to Vince Young's infamous "Dream Team" quote from more than a decade ago. We all remember how that one turned out...

Look, it'll probably be fine. Sanders was playing up how talented the team is, which it sure does look on paper, and even though it's hard to derive much until actual 11-on-11 games are played, these Eagles already seem like they have far better chemistry than the 2011 squad ever did.

Sanders, who has battled injuries the past two seasons, is entering a contract year with his future as an Eagle not entirely clear. He talked about that uncertainty in the interview, along with the team's and his own community outreach efforts, which you can check out in full HERE.

New receiver A.J. Brown has also been building up hype for the team ahead of training camp with a video released Tuesday morning of him and Jalen Hurts working on routes.

Parts of the national media are feeling pretty high on the Eagles right now as well.

Players will report to the NovaCare Complex on July 26.