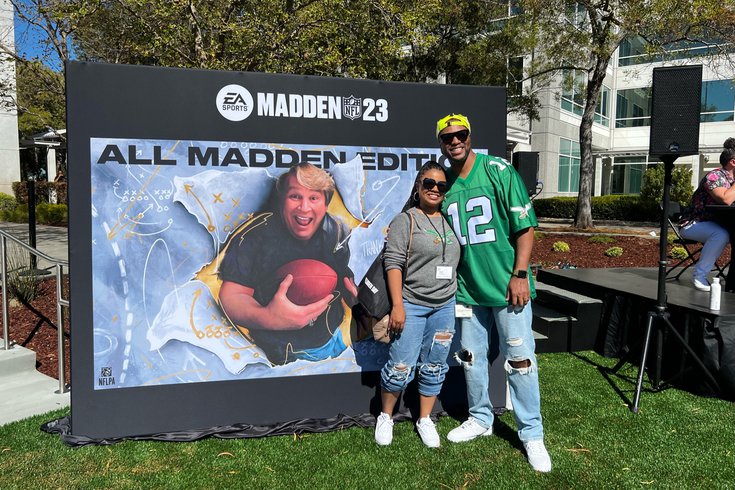 Artist Chuck Styles poses for a photo with his wife, Devon Edwards, next to the Madden NFL 23 cover he created after its reveal at the EA Redwood campus in California.

Chuck Styles always had plans to create a tribute piece to John Madden.

After the Hall of Fame coach passed away in late December, fans and Styles' peers in the art world asked about it. He wanted to do it.

But it had to wait.

The Greater Philadelphia-based visual artist, who has grown into an increasingly prominent name within sports culture, was in the home stretch of work with Topps on the Project70 line of baseball cards.

That had to come first. He wasn't going to rush anything.

Then came an email from Electronic Arts.

The major video game publisher wanted to contract him for one of their projects, but couldn't tell him exactly what it was until he signed an NDA.

Styles, who was highly familiar with their lineup of games, obliged.

"I'm like 'Alright, let me get this NDA out the way so I can find out what it is,'" he said during an interview over Zoom last week. "And the follow-up email was like 'Alright, let's just cut straight to the chase: We want you to do the 'Madden 23' cover.'"

And just like that, what was originally going to be a personal venture transformed into an effort that would arguably stand as the biggest tribute of all.

"I'm like 'HOLY!... YEAH, MAN!'" Styles said, grabbing his head as he recalled the moment of sheer joy and disbelief. "I needed a break. I needed like a 20-minute break just even before I responded back because I was just livid, man (in a good way). My mind was blown."

It wouldn't be the last time.

"Madden NFL 23" is going to be a celebration of John Madden himself. It had to be. The legendary coach and broadcaster was so influential to football that he ended up changing video games forever too, lending his name and knowledge to a series that has gone on to become one of the top-selling franchises in the industry, creating generations of new football fans in the process.

On June 1, Styles was on hand at EA's headquarters in Redwood, California for the grand unveiling of "Madden NFL 23." Alongside EA staff and members of Madden's family, there was a tour of the campus, the dedication of a 50-yard football field in Madden's name at the center of it, an update on a $5 million charity initiative by the publisher in the coach's honor, and then finally, the reveal of the cover Styles had been working on.

Presented the cover and gave a speech that came from the heart following Mike Madden, John Madden’s son for the #MaddenDay #Madden23 Event! The full tour of the HQ was like DisneyWorld for Gaming!!!! This was a moment I will remember for the rest of my life! pic.twitter.com/TOQ9p6XIFY

"They asked me to give a speech at the tail end of all the speakers," Styles, who joked about "strategically" wearing his throwback Randall Cunningham jersey for the occasion, said. "I'm like 'What the hell? I'm just the artist! Why am I going after Mike Madden (John's son)?'"

But he believed his words resonated in the end, of how John Madden was all about bringing people together and how the Madden games and playing football in the suburban streets just outside of West Philly did that for Styles and his brothers as kids.

And the cover he pulled the curtain back on after struck an even bigger chord: Full artwork by Styles depicting a younger Madden bursting through a silver and gold frame as arrows flow around him to form plays out of drawn out Xs and Os, a touching call back to the original "John Madden Football" cover from 1988, capped off by a message to the right of him that reads "Thanks, Coach." 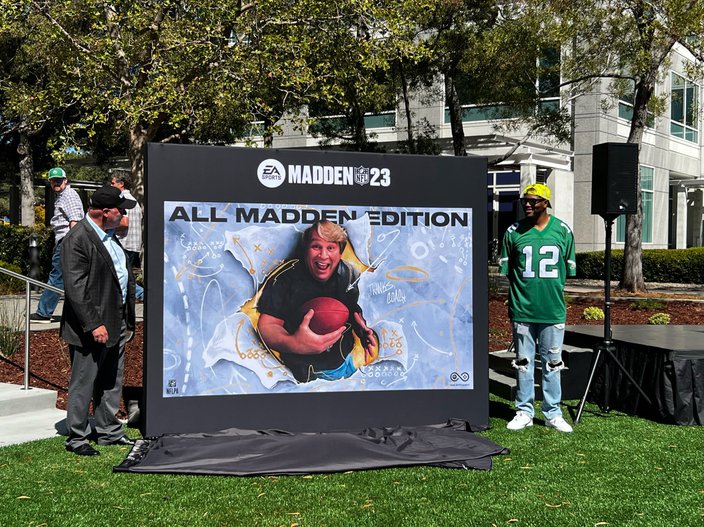 That will be the box art for the special "All-Madden Edition" of the game as part of a collection of three unique covers that will launch with "Madden 23" come mid-August, with each one paying tribute to a different chapter in Madden's storied football career. The "All-Madden Edition" is for John Madden as a video game icon.

The other two are of John Madden the coach, using that unforgettable photo of him being raised up on his players' shoulders after the Raiders won the Super Bowl in 1977, and John Madden the broadcaster, with Madden facing the camera and the view from the booth in the background (plus some old screenshots from previous games on the monitors behind him).

All three were put together in collaboration between Styles and design agency Cinco, a firm that has helped create the branding for previous EA titles, and feature both telestrator-style line work — a John Madden signature — and the "Thanks, Coach" message by Styles across the board.

"[Cinco] were the ones that actually had the idea of highlighting the 1988 cover," he said. "[Madden] busting through the cardboard, or whatever board it was, and him just having this excited expression on his face to just be arriving to the video game system, the video game world.

"They wanted my artistic interpretation, highlighting Coach Madden, remixing that cover in a sense. They paid attention, EA and Cinco. Their attention to detail as far as paying attention to my work, they've seen that I use a lot of gestural lines, a lot of bright colors... They saw that resembled the way Coach did his play lines when going through some of the plays and they were just like 'Aw man, he's perfect for the job!'"

And the football world thought so too.

Within minutes of the cover reveal, media, players, and even coaches all reacted to the news that Madden was returning to the cover of his game for the first time since 1999 with "Madden NFL 2000."

“What a great tribute.”

Styles' artwork was up on the PlayStation and Xbox digital stores, and in a couple more months, players everywhere will be picking up their copies off the shelves.

"I was just really really glad that the cover was well received," he said. "I think that EA going with John Madden... I'm glad they went with that decision, because I definitely think I would've personally pushed back had that not been the case, but I think they knew what they were doing straight from out the gate.

"There was no other option for this year's cover than John Madden and to see everyone else was on that same train, like 'Oh yeah, no, this makes sense. He has to be on the cover.' And the execution of it, the rollout of it, it was... I couldn't ask for anything more."

Moreover, as Styles was being shown through EA's HQ back on the 1st, he saw massive banners of "Stars Wars," "FIFA" and "Madden" cover art hanging in the lobby, and later on a wall dedicated to cataloging the more than 1500 games that the company has put out since its inception, realizing that his Madden cover would soon be on there with the numerous other titles he remembered playing growing up.

Styles, in his sixth year as a full-time artist, said he is trying to stay focused on what is still ahead, in terms of other projects — this year alone has already seen collaborations with Topps, ESPN, NASCAR, the Chicago White Sox, the "Martin" reunion, and of course EA — and the promotional cycle leading up to the August 19 launch of "Madden 23," which he's hoping he might be able to bring part of to Philly at some point this summer.

Still, there have been points where it has hit him.

"Sometimes I sit back and be like 'Hold on, man... f***in' Madden cover, that's major!'" Styles said. "Then at the same time with so many things happening right now, I know that I have to stay focused on whatever projects are in front of me.

"I know that I'll be able to really really celebrate to the max when that game is in the store, at Walmart, my nephews and my cousins and my friends are celebrating with me with the physical copy, playing the game."