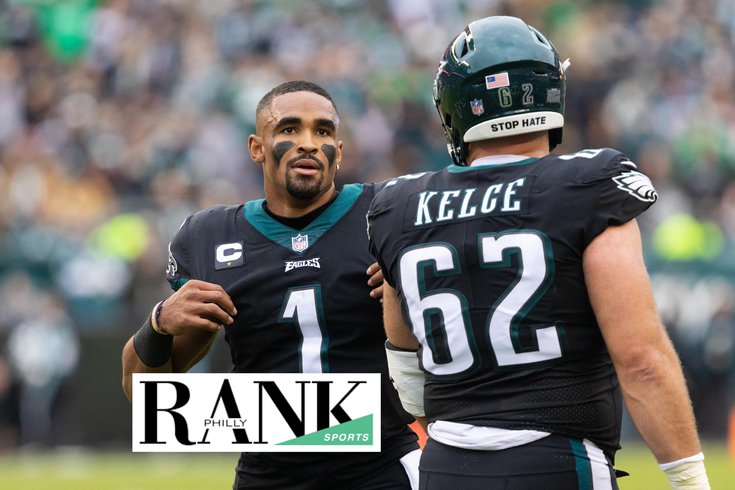 What do Eagles fans need before training camp starts on July 26? More rankings and more lists! PhillyVoice has been on top of that, ranking the best quarterbacks, running backs and wide receivers in Eagles history in addition to discussing the best sports video games of all time.

To keep with that theme, I'm going to rank the best players on the Eagles' roster heading into the 2022 season. This isn't who's "most important." This isn't a projection on what this type of ranking will be at the end of the year. It's based on who are the best players right at this moment. I'm sure this list will look different come January and perhaps I could do a new ranking then and compare it to my offseason takes.

Some honorable mentions to start...

Brandon Graham gets grandfathered in here a bit. He played in just two games in the 2021 season before suffering an Achilles tear. Coming off that type of injury at his age is a daunting task, but Graham has aged gracefully, making his first Pro Bowl squad in 2020 at 32. The dude's work ethic and motor are relentless. If he's on the field, he's going to be productive.

Jake Elliott... great 2021 season! He converted 90.9 percent of his field goals (the best mark of his career), made all 44 of his extra-point attempts, and all three of his kicks from 50-plus yards. If it's a clutch situation, I have the utmost faith in Elliott.

I'd imagine Landon Dickerson ends up on this list proper next year. He was a beast as a rookie, starting 13 games and making an impact despite a minimal offseason due to injury issues. Having Dickerson next to Jordan Mailata (more on him soon!) will keep the Eagles' offensive line elite in 2022 and beyond.

Josh Sweat had a career-high 7.5 sacks in 2021. If I got decent odds, I might bet on him to crack the double-digit total in 2022. He isn't the Eagles' best pass-rusher given one of the team's splashy offseason acquisitions, but he's pretty damn good.

No disrespect to former First-Team All-Pro Fletcher Cox, but Javon Hargrave is the best Eagles defensive tackle right now. That's saying a lot when it's a unit that features a player with Cox's history,  first-round rookie and Georgia star Jordan Davis and 2021 Day 2 pick Milton Williams.

Among true defensive tackles around the league, Hargrave's 7.5 sacks in 2021 were third behind Aaron Donald and Jonathan Allen (via Stahead). Those numbers might not go up in 2022 with so many more pieces in place (BG being back on the field, the Haason Reddick signing, Davis and Williams blossoming, etc.), but his on-field impact is assured.

After Zach Ertz's midseason trade to the Cardinals, Goedert averaged 61.4 yards per game (and 15.0 yards per reception) over his final 10 games of the season. That's while playing in an offense that became increasingly run heavy (where he's a force as a blocker too). There were only four tight ends who topped that yards per game mark over the course of the entire 2021 season: Mark Andrews, Rob Gronkowski, Travis Kelce and George Kittle. Those are two slam dunk future Hall of Famers (Gronk and Kelce) and two guys who've been First-Team All-Pro selections (Andrews and Kittle).

With Ertz gone, there's no excuse for Goedert failing to establish himself as a definitive top-five tight end in the NFL.

Jalen Hurts is a divisive figure in the fan base with warring factions ready for him to be The Guy and others already wanting to move on from the 2020 second-round pick. Is he one of the greatest passers I've ever seen play for the Eagles? No, but his ability to lead a historic rushing attack and intangibles rate well with me. Hurts is low on mistakes despite his ceiling as a passer being somewhat clear. He was a huge factor in almost all of their wins in 2021. He's far from elite, but looking around the NFC (and the NFC East in particular) I believe the Eagles can contend with him.

Hurts' standing on this list is the most volatile of any player. He'll either be an easy top-five nod in 2023 or off the list (and team) completely. It's up to him to grab that "QB of the Future" billing.

Reddick scores brownie points as a Camden native and a former walk-on at Temple, but make no mistake, the Eagles' big free agent signing deserves to be here because of the production he puts up. His 23.5 sacks over the last two seasons are the fifth-most in the NFL behind T.J. Watt, Myles Garrett, Trey Hendrickson and Aaron Donald (via Stathead). He's not the caliber of pass-rusher as those first two dudes, but he can get to the quarterback, something that's sorrily been lacking in Philadelphia as of late.

Reddick is a unique player who will be utilized as an off-ball linebacker to rush the QB, someone who should be the perfect fit in defensive coordinator Jonathan Gannon's scheme.

The Eagles force-fed the ball to DeVonta Smith in a meaningless Week 18 game this past season in order for him to break the franchise rookie receiving yards record. Even if it's not a play that's completely contorting a defensive formnation, the Birds should've done that way more all season, something I blame more so on coaching rather than simply Hurts. The dude's got the goods.

Where does Smith fall among the best No. 2 receivers in the NFL? Hunter Renfrow was more productive in 2021, though I think most would take Smith over him in a vacuum. Both Tee Higgins and Jaylen Waddle have had great starts to their careers, but the Slim Reaper should be in that mix.

I didn't love the Darius Slay trade at the time. I was underwhelmed after the 2020 season and even during the first month or so of the 2021 campaign. What did Slay (you have to call him Slay) do after that? He made me look a fool because he balled out, was a huge playmaker with a nose for the ball and had his best year since his First-Team All-Pro performance in 2017. He merited All-Pro consideration in 2021 too.

Slay might not be a long-term player in Philly because of his age and a contract full of void years after 2023, but when evaluating the Birds as they are, Slay is a top-five pick.

I'm going to drop a take: I could see him being No. 1 on this list after the 2022 season. Mailata has the best value contract in the NFL according to Pro Football Focus and has gotten exponentially better in a short period of time. He was drafted in 2018 despite never playing American football in his life. Three years later, he was punishing defensive ends and linebackers as the Eagles found themselves pounding the ball on the ground. He should've been a Pro Bowler in 2021 and will be this coming year. Hell, he could fight for an All-Pro nod.

Putting aside a few injury blip years, the Eagles have essentially had three entrenched left tackles in time watching the team: Tra Thomas, Jason Peters and Jordan Mailata, who might be here for another decade for all I know. Mailata is the Eagles' greatest post-Jason Kelce draft steal and his development is a credit to both Mailata himself and Eagles offensive line coach Jeff Stoutland.

I'm going on like this and he's not even a top-two offensive lineman on the team currently. What a positional group in the trenches!

He hasn't played a snap in a midnight green jersey, but A.J. Brown's prolific young career demands a high placement on this list. Brown is making hype videos about his trade to Philadelphia, teaming up with BFF Jalen Hurts and is ready to put NFC cornerbacks on notice. Over the first three years of his career, Brown has 185 catches, 2,995 yards and 26 total touchdowns. Here are the list of players to match those numbers over the same period (via Stathead):

A 2021 First-Team All-Pro selection and a future mayor of Philadelphia, Kelce is better than ever even as he's weighed retirement the last few offseasons. Kelce continues to solidify his Hall of Fame case as he racks up accolades and serves as the heart of this Eagles team. Despite his age, he can still move like a cheetah, getting up the second and third levels of the defense and opening running lanes for the Birds' stable of backs.

How about getting him one more Super Bowl parade speech before he hangs up his cleats?

Pave the Lane! Lane Johnson missed three games during the 2021 season while battling with mental health issues, bravely speaking up on that topic. When he was on the field, he was the best right tackle (best tackle overall?) in the NFL. He's getting up there in age, like Kelce, but he remains both a decorated Eagles legend and a player who should dominate once again in 2022.