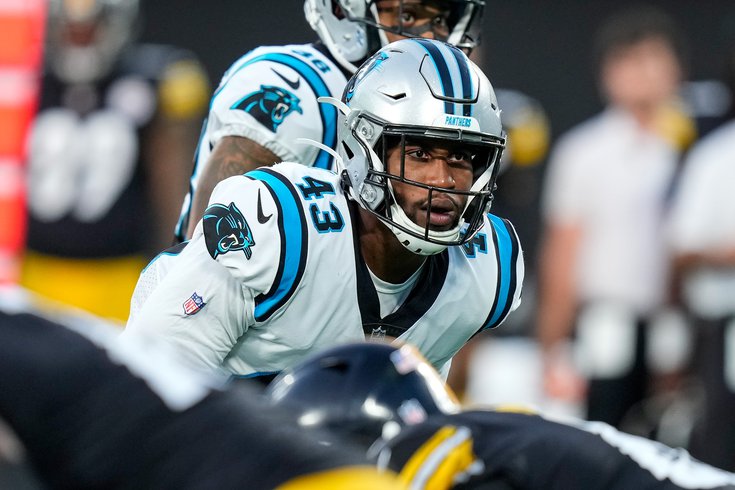 The Philadelphia Eagles have agreed to terms with former Arizona Cardinals and Carolina Panthers edge rusher Haason Reddick, according to Mike Garafolo of NFL Network.

The Camden native and former #Temple Owl is coming home.

In 2020, Reddick, 27, finished with 12.5 sacks and six forced fumbles, though five of those sacks came against an awful Giants offensive line late in the season. Prior to 2020, Reddick only had 7.5 sacks in his first three seasons in the NFL. He was also seen as sort of an oddball player, in that he's listed at 6'1, 235, which isn't exactly an ideal size for your prototypical edge rusher.

The Panthers took a shot on him, signing him to a one-year deal worth just $6 million (fully guaranteed), and it wound up being one of the rare good moves they made last year. Reddick wasn't just a one-year wonder, rewarding Carolina with 11 sacks, 18 QB hits, and two forced fumbles. He was actually in on 14 sacks, but had to split six of them with teammates. Here are all 14 sacks:

In the Eagles' scheme, Reddick could be an interesting fit in their SAM linebacker role, which was occupied by Genard Avery in 2021. However, it only makes sense for the Eagles to shell out good money for a player like Reddick if they intended to increase the presence of that role in their defense. It was certainly understandable for Jonathan Gannon not to use the SAM backer often in 2021, when the best option at his disposal was Avery, who really wasn't good at any of the three main job requirements (rushing the passer, playing the run, and dropping into coverage).

The bottom line is that the Eagles sacked opposing quarterbacks 29 times in 2021, second-worst in the NFL. They needed more players who can get after the quarterback, and Reddick has proven over the last two seasons that he can do that. Gannon now has to find creative ways to get him as many pass rush opportunities as possible.

Even with Reddick now in place, the Eagles should still be in the market for an edge rusher in the first round of the 2022 NFL Draft. An edge rusher rotation of Reddick, Brandon Graham, Josh Sweat, and a rookie first-round pick to go along with Javon Hargrave, Milton Williams, and either Fletcher Cox or another high pick at DT cold be a dominant, disruptive group.

Oh, and he's a local guy who went to Temple, if that does anything for anyone.

Update: The Eagles are calling Reddick a linebacker, so he will indeed play the SAM linebacker spot that we speculated on above.